The ponytail didn't make you any less of a player. 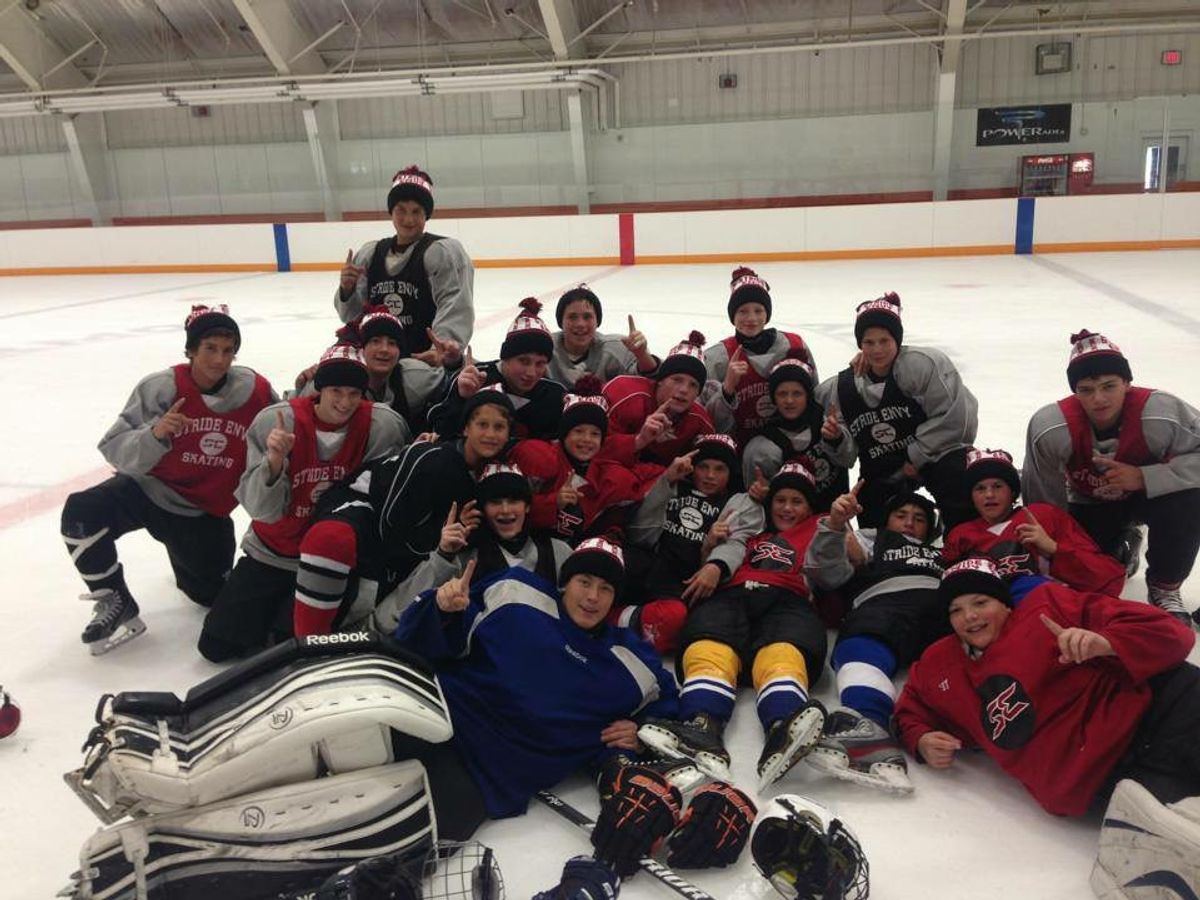 Many girls start off their hockey careers by playing on boys' teams, especially if there are no girls' teams in their area. Personally, I played boys hockey through my freshman year of high school and even played on a few boys spring and summer league teams throughout high school. Boys hockey shaped me into a great player: it made me faster, stronger, and more resilient. Along the way, I experienced some pretty interesting things, most of them due to my hot temper and ability to be very passive aggressive. Here is a list of 15 of those experiences.


1. Having to change in tiny referee rooms

In many rinks there is no designated girls’ locker room. This means that the girls are forced to change in teeny tiny bathrooms, storage closets, and most of the time, referee rooms. This isn't always bad though, it means you get to play your own music and prepare for the game without distractions. This is also the place where you get to bond with girls on other boys’ teams. These are the same girls who usually end up being your teammates later on when you both switch to girls’ hockey.


2. Having to prove yourself at tryouts year after year

Another year, another set of coaches to impress during tryouts. However, no matter great you did, coaches continued to rate you lower than the less-skilled boys. One time I got so angry about this that I threw a fit and ended up screaming at the coaches after tryouts. They were speechless and the organization was not happy with them.


3. Getting cut from teams you were good enough for, just because you're a girl

This was by far the WORST part of being a girl trying out for a boys’ team. I was cut from so many teams in multiple organizations just because the coaches didn't want a girl on their team or were afraid for my safety. I could've played a key role on these higher level teams, but instead I soared on lower level teams. Often I was one of the leading scorers, fastest skaters, and best players in the entire league. Of course, the other parents hated this and complained to the organization because their boys were being shown up by a girl. I thought it was pretty funny though, and I think a lot of girls can relate to me on this one.


4. Having your teammates parents ask you why you don't wear pink laces

Unless the entire team is wearing pink for breast cancer awareness, you will not catch a serious hockey girl dead wearing pink laces. She's a hockey player, not an elegant dancer.


5. Being underestimated by your coaches and teammates

Probably the best perk of being a girl on a boys’ team. While everyone was busy underestimating you, you were dangling your way passed the boys and making goalies rethink their entire lives. The look on everyone's faces when they realized you were a dominant force was absolutely priceless. In no time at all your coaches went from not blinking an eye at you to have you centering their first line and leading the power-play unit.


6. Being one of the smallest players on the team

This wasn't an issue for me until I hit peewee major (age 12) but once it was, I was only underestimated more. At first I didn't like it but once I learned to compensate my small stature with skill, I found that playing with the big boys was one of the best things ever.


7. Being able to get away with things that usually would be called as penalties

One of the great perks of playing on a boys’ team. For some reason the referees don't like giving penalties to girls. Maybe because they're afraid of getting yelled at by coaches and parents or maybe they like seeing the girls playing tough but whatever the reason, I made sure to take advantage of this. I would never intentionally trip, hook or slash opposing players but sometimes I would recklessly hit them. I'd end up hitting them even after they got rid of the puck or forcing them to go head first into the boards. When I did end up getting called though, I made sure to be more careful for the rest of the game.


8. Being either the coach's favorite or the player they choose to ignore

I have been on both sides of this and when I got the shorter end of the stick my season was miserable. I have also found that when the coaches like you, so do the boys. When I was in 6th grade my coach couldn't care less about me, and the boys hated me. It was so bad that I almost didn't play the next year. I'm glad I did though because from that point on I was always the coaches favorite and the boys were very inclusive and respectful. This was the point in time where I also fell in love with hockey and I owe it all to my coaches. So to all of my former coaches and teammates, thank you so much.


9. Being one of the best hitters on the team

Unlike girls’ hockey, it is legal to check in boys’ hockey once you turn 13 (11 when I was younger). Most girls switch to girls’ hockey at this stage but the ones who don't get to experience one of the best feelings in the world: being able to completely crush arrogant guys into the boards. What makes it even better is when your teammates, coaches, and parents from both sides begin to laugh and cheer because you have completely ruined the ego of some poor "tough, hockey playing guy." This was one of things I couldn't get enough of when I played with the boys, which is why I was one of, if not the best, hitter on the team.


10. Getting the, "Let's go boys... and girl," from coaches, parents and other teammates

This was always a bit awkward, but at least people recognized your existence. Maybe a better thing to say would've been "let's go guys!" Because even though you weren't a "boy," being a part of a boys’ team automatically made you a "guy." There's a difference.


11. Getting the "she's pretty good for a girl" comment from everyone who sees you play


12. Being able to get your food first at team dinners so the vultures (boys) don't take it all before you get to it.

All I have to say to this is, "Hahahahahaha!" I, as well as most hockey girls have huge appetites and will eat more than the average boy. I often took full advantage of this little perk and piled my plate high with all of the best food. The boys never caught on to my huge appetite either.


13. Having a new coach refusing to believe you're on his team when you show up for the first day of practice.

This happened to both my sister and me once we got older. The coaches thought we were playing a prank or showed up to the wrong rink. This was no joke for us though as we were there to work. Most of the time the coach got very embarrassed and offered a huge apology once he saw us skate.


14. Getting asked why you don't switch to girls' hockey

This occurred way too often. Why would you ever switch to girls' hockey when you were dominating the boys' league? Girls' teams are less competitive and you can't get the satisfying feeling of crushing the patriarchy into the boards like a bug into cement with your shoe. When I was asked this question my response was always "I'll switch when the boys get too big." Which did not happen until I was 15 and I continued to play with the boys during to off-season anyway.


15. Totally kicking butt when you finally do switch

A lot of girls find that when they do switch over, they completely dominate even at the highest level of girls’ hockey. In my first year of playing girls' hockey, I was the leading scorer on a u19 team as a 15-year-old. The next year I played on a triple A team as well as my prep school team and was dominate on those teams as well. I truly believe that If I played with the girls when I was younger then I would have never developed into the great player that am now and I'm sure that many other girls can say the same.