10 Reasons Teddy Roosevelt Is The World's Biggest Badass
Odyssey
CurrentlySwoonLifestyleHealth & WellnessStudent LifeContent InspirationEntertainmentPolitics and ActivismSportsAdulting
About usAdvertiseTermsPrivacyDMCAContact us
® 2023 ODYSSEY
Welcome back
Sign in to comment to your favorite stories, participate in your community and interact with your friends
or
LOG IN WITH FACEBOOK
No account? Create one
Start writing a post
Sports 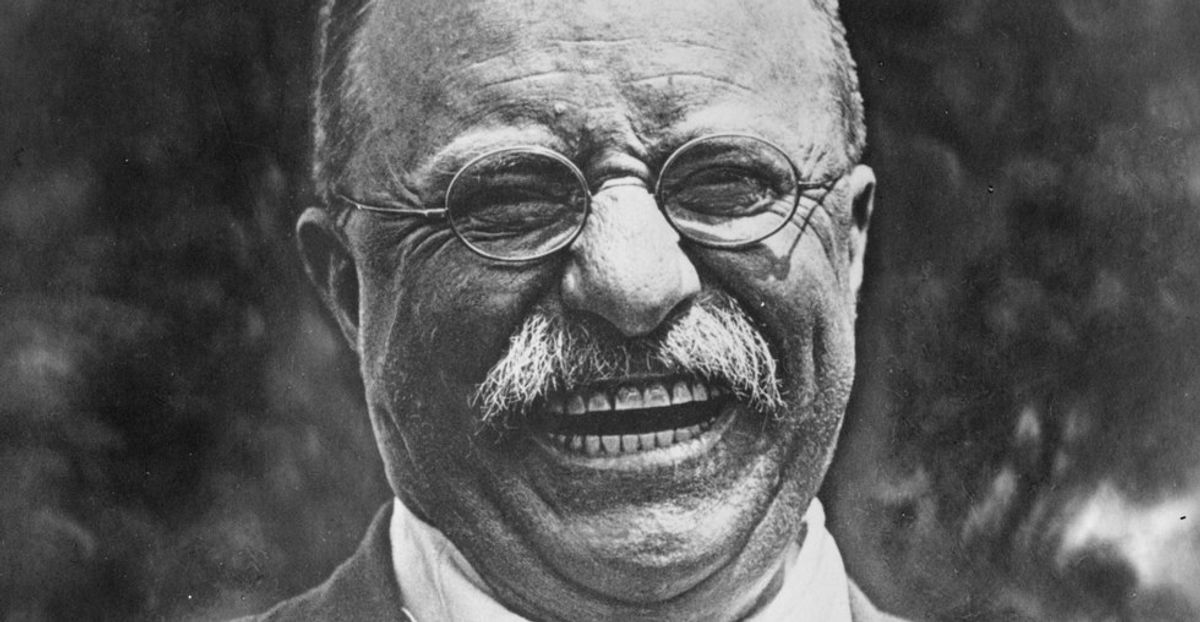 Seriously, Teddy is the man. If you don't believe me, check out these facts. After reading this you will realize that TR is one of the greatest Americans to ever walk this earth.

1. He Told His Doctor to Shove It

When he was a child, he was so sickly and suffered from such bad asthma, that the doctor told him that he needed to take it easy or he would live a short life. He replied "Doctor, I'm going to do all the things you tell me not to do".

In the Spanish-American War, he led the charge up San Juan Hill, and won a decisive battle. He earned the Medal of Honor, the highest award the U.S. military can present.

3. He Boxed in the White House

While President, Teddy routinely invited over golden glove fighters to box against. The aftermath of one of these fights left him blind in one eye.

4. He is the Reason the Forward Pass Exists in Football

While he was President, there was a strong national desire to outlaw football, on the grounds that it was so dangerous. Teddy demanded that they change the rules, and suggested an amendment such as the forward pass.

5. He Started His Own Political Party

After he was kicked out of the Republican Party for being too progressive, he started the Bull Moose Party. The platform was similar to what a moderate republican would support.

6. He Won the Nobel Peace Price

TR was awarded the Nobel Peace Prize for negotiating an end to the Russo-Japanese War in 1905. Many thought that he did not deserve it, and that he was an imperialist. However, the Roosevelt Corollary arguably prevented many wars in the western hemisphere.

7. He Gave a Speech After He Was Shot

Right before a speech in Wisconsin, Roosevelt was shot in the chest by an attempted assassin. With the bullet lodged in his chest, he gave the hour long speech anyway and exclaimed "It takes more than that to kill a bull moose!".

After he lost the 1912 election, he wanted adventure. So he decided to go into completely uncharted territory in the Amazon, and descend upon a river that no one had ever been down before. The river is now called the Roosevelt River, but was referred to as the River of Doubt before his expedition.

9. He Wanted Some Action in World War I

After being a war hero 20 years prior, and serving two terms as president, Col. Roosevelt begged President Wilson to let him serve in the military again. Wilson denied the request. Some think it is because he was scared that Roosevelt would be seen as the real leader of the U.S.

10. He lived The Strenuous Life

Throughout his life, Teddy lived what he called the strenuous life. Basically, the philosophy was that you should take any opportunity you have, and kick ass at it. Never be idle, and never be content with your successes. Your life should be strenuous, and it will lead to greatness.