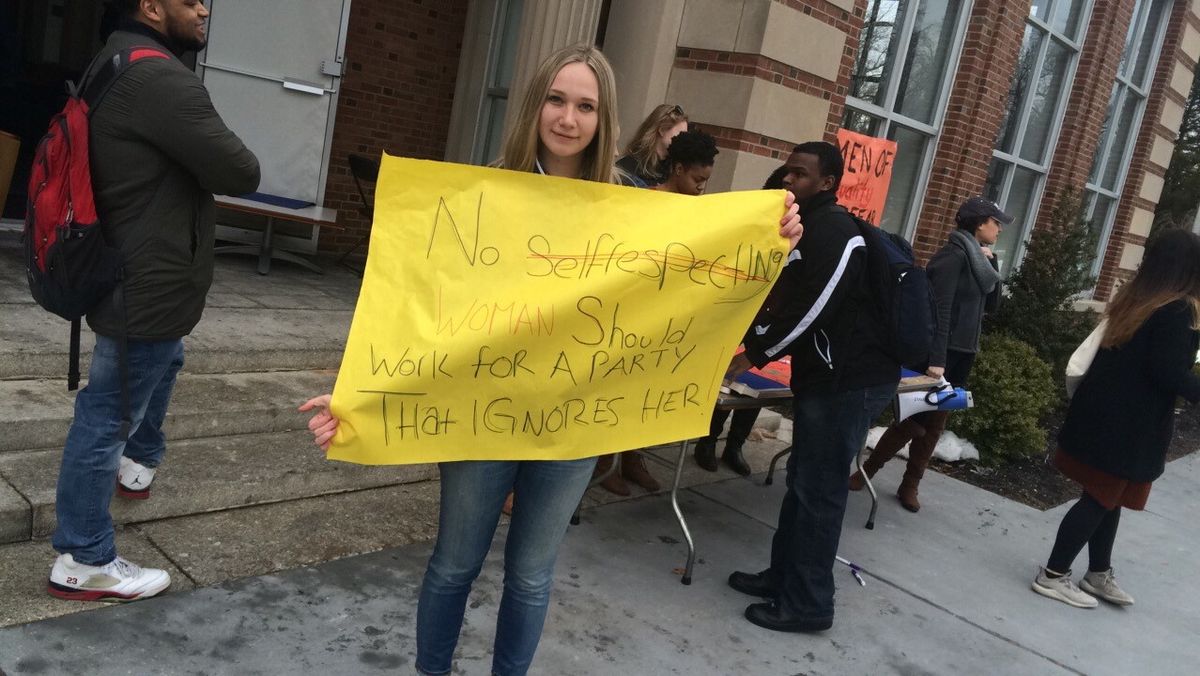 Recently, in light of my upcoming graduation, I've started to take note of many things that I've taken for granted in the last four years of being an undergraduate. For the most part, they are simple things like having access to food whenever I want it, a living space free of my parents, and free and abundant wifi. However, one night as I was walking back to my dormitory, I had a small and poignant epiphany. Over the last four years, I've been privileged enough to walk free at night unafraid, even drunk sometimes, completely unaware of how great this privilege of mine is.

It hit me when I tried to imagine life after FDU, perhaps in the city during graduate school, and I found myself thinking, There's no way I could walk home like this in NYC. It was a sobering moment because now aware of the fragility of my position as a woman in the world, it was impossible to ignore the inequalities that women all over have to endure. Fairleigh Dickinson might be a safe and wholesome place for women and men to enjoy equality, but we are just a speck on the map, a blip on the radar. It's easy to be lulled into a sort of sleep in which the rest of the world drops away as your day to day life eclipses the mind, but every now and then, one needs a wake-up call. On Friday, March 24, a group of female resident assistants provided just that for the FDU student body by hosting a campus-wide women's march.

Unfortunately, I was unable to participate in the march itself, but I was lucky enough to sit down with Marissa Levis while she and the others hosted the pre-march poster signing event outside of the Orangerie. Girl-power anthems were being blasted from stereos; women were chanting through bullhorns, and even though the day was cold and the sky threatened rain, there was a general mood of excitement among the crowd that gathered. Marissa and I sat down inside, and after a few jokes got down to business:

And are you guys all resident assistance?

Marissa: Yes we are!

So what made you decide to have this march?

Marissa: So this was right after, I'm pretty sure this was around Trump's campaign before he got elected... We were out at RA training, and we were at Gravity Vault having a conversation, and I mentioned it would be super cool to have some sort of women's march at school, and Kaitlyn heard me and said, “Oh my gosh, we should totally do it!” Eventually, it led to us including other resident assistance, and we planned the women's march.

Is there a specific goal behind this, or is it just to raise awareness of Women's History month?

So this wasn't in direct response to Donald Trump and his campaign? How much do you think the Trump campaign, and his Presidency currently, influenced your decisions to host this march?

Marissa: I wouldn't say it was 100 percent the motivation, but it definitely was there. Especially with other students on campus campaigning for Trump, it makes females feel uncomfortable knowing that their fellow peers are supporting someone so ridiculous and unfair to the female population. So, I think it was just something that needed to happen on this campus.

You were talking about Trump's campaign and the election in general. Pre-election, pre-Trump declared POTUS, what did you think of the campaign, who did you support? I'm assuming you were anti-Trump and pro-Clinton?

Marissa: I'm a Bernie girl, all the way, and I always say that there is a lesser of two evils and Trump and Pence were one of those big evils... Seeing that just wasn't my idea of what I want my America to look like.

So Trump and Pence don't envision your ideal America?

Marissa: Not at all.

Marissa: Well, I'd like to see more women's classes, but in general I'm just looking for equality. Here, I can say women do seem pretty equal on this campus. I do have women professors who are awesome and highly educated, and it makes me happy that FDU does present women that way, but being from Delaware, from a very rural community, you can definitely tell that women are still trapped in the 1950's roles there. Even though this campus is good, it's important to know that it's still a huge thing elsewhere.

So you're hoping that the march will raise awareness about how we (America) aren't perfect?

Marissa: Exactly! We want people to ask themselves “Are we where we want to be as a country?” I definitely feel like sometimes universities have a tough time addressing this issue because they are afraid to step on people's opinions, but sometimes you have to throw the sh*t to the fan and see how people are going to react from it in order to see change.

What do you think the role is for our generation to enact change? What do you think is the importance of our voice in politics especially with Donald Trump as our President and a Republican majority in Congress? How do you think we need to mobilize to address the issues and safeguard our rights as women?

Marissa: Honestly, we, the quote-unquote millennial generation... We are the melting pot. We are a generation in which people are willing to be open about their sexuality, about so much... There is so much that we are allowed to say, so many freedoms we have, and so much that we demand, yet the media portrays us as a bunch of idiots, so we need to work hard. We need to prove ourselves to them, like “Hey we are hard working, we are putting our voice out there.” We need more events like this, where we are being positive and working towards positive actions, positive change.

Sometimes I find myself despairing over the world we live in. It usually happens when I look outside my life, when I read a newspaper or have a friend try to downplay something terrible that happened to her as if it was normal even when it certainly isn't. In moments like those, I console myself with the thought that there are people out there doing what they can, dedicating themselves to being the change this world needs, and having people like on my college campus makes me more proud than I can say.