Why Volleyball Really is a Sport

Why Volleyball Really is a Sport

For the people who say that their sport is better, here are some reasons why they are wrong. 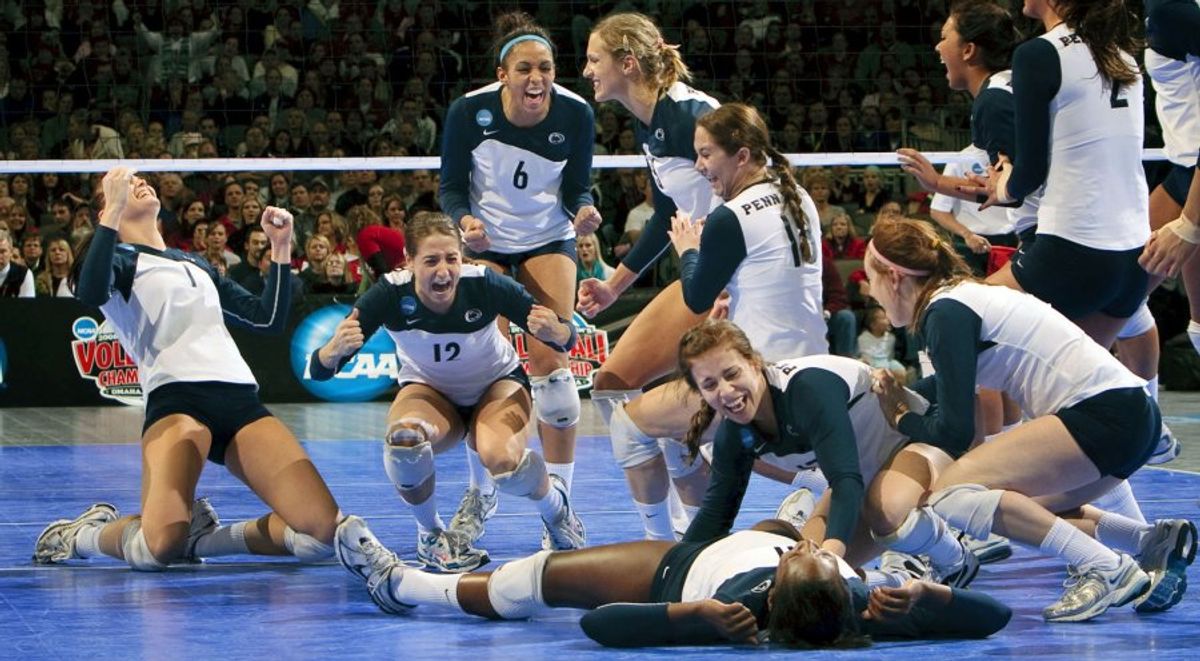 Through my 8 plus years of playing volleyball, I heard way too often from my friends that volleyball was not really a sport compared to sports they played, such as soccer or football. These uneducated sports fans would claim, and I quote, “anyone can spike a ball like that,” or “I bet that after a day of practice I would be able to beat you.” I am here to tell you that you are wrong and that volleyball is, in fact, a real and intense sport.

Physical contact sports are not the only ones that require the player to show their aggressive side. Volleyball may not be a sport where you are shoving or blocking another player, but to get that perfect pass, or hit, you need to really want it -- and then take it. Volleyball players are not afraid of anything, and the fact that diving on a hard wooden court is a significant part of the game should tell you something. There is no better feeling than getting all of your anger out by slamming the ball to the other team’s floor.

Contrary to popular belief, you cannot learn how to play volleyball in just one day. The skill set that makes a great volleyball player takes many years to perfect, just the same as any sport. To become a stand out player, you must really focus on what you want to achieve and work hard at it during every practice and game. Even players on professional teams miss serves and mess up a simple pass, but that is what makes the game great. There is always more to learn and to improve upon.

The feeling that you get when you save the ball by “pancaking” it right before it touches the ground is unnerving. The satisfaction that comes from blocking an incredibly difficult hit right down to the hitter’s feet is unlike any other. There is something to be said about the intensity of volleyball and how a good game can make the players feel. The crowd holds their breath when the final serve is taken, and cheers erupt when the server aces the ball for the game point. There is always an electricity in the gym, and everyone can feel it.

It will keep you in shape.

A lot of people don’t realize the training that goes into a good volleyball team. Practices start well before the season, and in the first couple of months it is common that the players will never even touch a volleyball. Being in shape is a huge part of the game because to last three to five sets of 25 points each takes a lot of strength and endurance. It might not be fun but it really goes a long way during games and tournaments. Volleyball will keep you in shape, I promise.

Volleyball is full of rivalries between teams. Maybe you haven’t beaten your rival team in over ten years and they hardly even think of your team as a rival anymore. However, you still hate them when they walk into your gym for a match and you feel your heart break every time you make a stupid mistake. Rivalry games are where you draw the biggest crowds and where you feel the most heat and intensity as your blood boils with the deepest desire to defeat the team across from you. When you finally do, it is the most victorious win you will have that season.

The most important thing about volleyball is the team as a whole, not each person individually. In order to win the game every one of the six people on the court, as well as those cheering from the sidelines, need to work together and support each other. When one player gets too controlling or starts to doubt his or her skills, it brings the rest of the team down. During the season your team is your second family and you love each other them as if they were your brothers or sisters.

Love for the game.

Through every difficult time as a volleyball player, including bad coaches, selfish teammates and winless seasons, I have never stopped loving the game. This is because between every bad experience there were many more good ones. Winning a championship game, bonding with teammates, proving yourself to your coach and beating the toughest team in your league are all reasons why playing volleyball is so rewarding. Even now, after finishing my last season and no longer playing on a competitive team, I still love everything about the sport and find time to play any change that I get. And I really hope that never changes.

"Somewhere, behind the athlete you've become and the hours of practice and the coaches who have pushed you, is the little girl who fell in love with the game and never looked back... play for her." Mia Hamm