Why Steph Curry And The Three-Pointer Are Bad For Basketball

Why Steph Curry And The Three-Pointer Are Bad For Basketball

The NBA's best player right now is the worst player for its future. 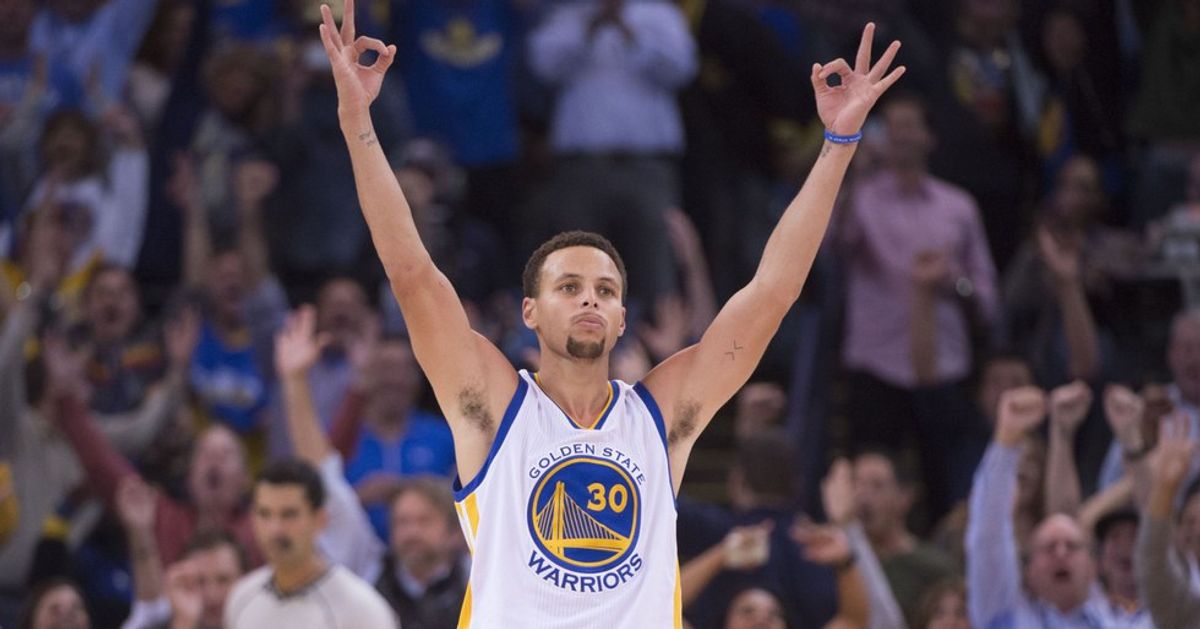 Every night when I watch SportsCenter before I go to bed, I see the same highlight. Steph Curry brings the ball up the court, ball handles and beats a defender off the dribble, then shoots a three-pointer from way beyond the three-point line. Swish. Then he does it again, and again, and again. Not only do I see that identical highlight every night, but I see it multiple times a night while the SportsCenter anchors break down the Warriors game. Everyone knows that 10 to 20 times per game, Curry is going to take a shot from behind the arc, and he’ll probably make about half of them. That’s good for Curry and the Warriors, but it’s bad for the future of basketball.

Before I go any further, I want to make it known that this article is not my way of saying Steph Curry sucks. I understand how great he is and how special he is to watch. Depending on who you ask, he is either the best or second-best player in the NBA. He was the league’s MVP last year, and he’ll most likely be the MVP this year, too. He’s a champion. And at 27 years old, he’s already considered one of the best, if not the best shooter in NBA history. I can’t take any of that away from him.

On Christmas Day last year, Mark Jackson, Curry’s former head coach with the Warriors, said that Curry is “hurting the game.” Jackson wasn’t trying to take anything away from Curry. He even said he thinks Steph is great, but immediately, Jackson’s comment was met with backlash. Many people thought he was taking a shot at the Warriors for firing him a little over a year earlier. But that’s not at all what Jackson was doing. He tried to explain himself, but people didn’t want to listen. I, however, listened. I understand what Jackson was saying, and I agree with him.

If you walk onto the gym at your local middle school, high school, or even the gym at the YMCA, what do you see? I’ll tell you. The first place these young, developing basketball players go to is the three-point line. One kid sits behind the arc and throws up a brick. Another kid gets the rebound, and instead of putting up a layup like they would in a game, the kid dribbles the ball back to the three-point line and takes a shot. Maybe it’s a swish, maybe it’s an airball. That’s not important. What’s important is nowadays, kids are only shooting threes. Curry has everything to do with that. Kids sit at the three-point line and attempt shot after shot after shot. Very few young players will attempt many two-point jump shots or layups (ya know, practical, high-percentage shots) if they aren’t at a practice with a coach telling them to do so.

I know what people are gonna say, “How are you supposed to become a better three-point shooter if you don’t shoot from behind the line?” My response: “How are you gonna make your high school team if you can’t pass, dribble, rebound, or make free throws?” There are other skills that young players need to work on. It isn’t all about knocking down threes. Sure, thanks to Curry, that’s the sexy play in the NBA right now, but there are other aspects of the game at which Curry excels. He’s an exceptional ball handler. He has great court vision and can find an open teammate from anywhere to rack up an assist. He’s become a better defender every season since he’s arrived in the NBA. He isn’t just a three-point shooter. He can do it all, and he does it all extremely well. But people don’t want to see him steal the ball and finish a fast break with a layup. People don’t want to see him find a wide open teammate for an easy layup (but I recommend you watch this video; you’ll be amazed). People want to see the three-point shot, so SportsCenter shows him knock them down night after night, jogging back down the court with his hands signaling "three" in celebration.

If kids don’t realize soon that Steph Curry isn’t Steph Curry only because he can shoot threes, there’s going to be a serious talent gap when the next generation of basketball players takes over. Say goodbye to driving to the lane to draw a foul, or the mid-to-long range two-pointer (which is pretty much extinct already). In today’s NBA, about 25 percent of all shots taken are three-pointers. That number is going to skyrocket if the three-point epidemic isn’t fixed. The three-ball craze is beginning to create a boring game, and it might even eliminate an entire position. Attempting all these threes is eliminating the need for a 6’6”-7’ tall center on many teams. Who wants to feed the big guy down low when they can just throw up a circus shot and hope it goes in? If the shot goes in, great; if not, have the big guy grab the rebound and kick it back out to you so you can shoot again. Revelations like these should cause a state of panic for NBA commissioner Adam Silver and the rest of the NBA.

None of this is Steph’s fault. He’s good at what he does, and kids want to be like him. He should keep playing his game and knocking down threes. He doesn’t need to change at all. Young players just need to understand they must strive to be well-rounded. Steph Curry is Steph Curry because he can do everything on a basketball court. It’s amazing that the best player in the NBA right now is also the worst player for its future.