Why I Mucked
Odyssey

No, I am not referring to cleaning out horse stalls--this is a little different. 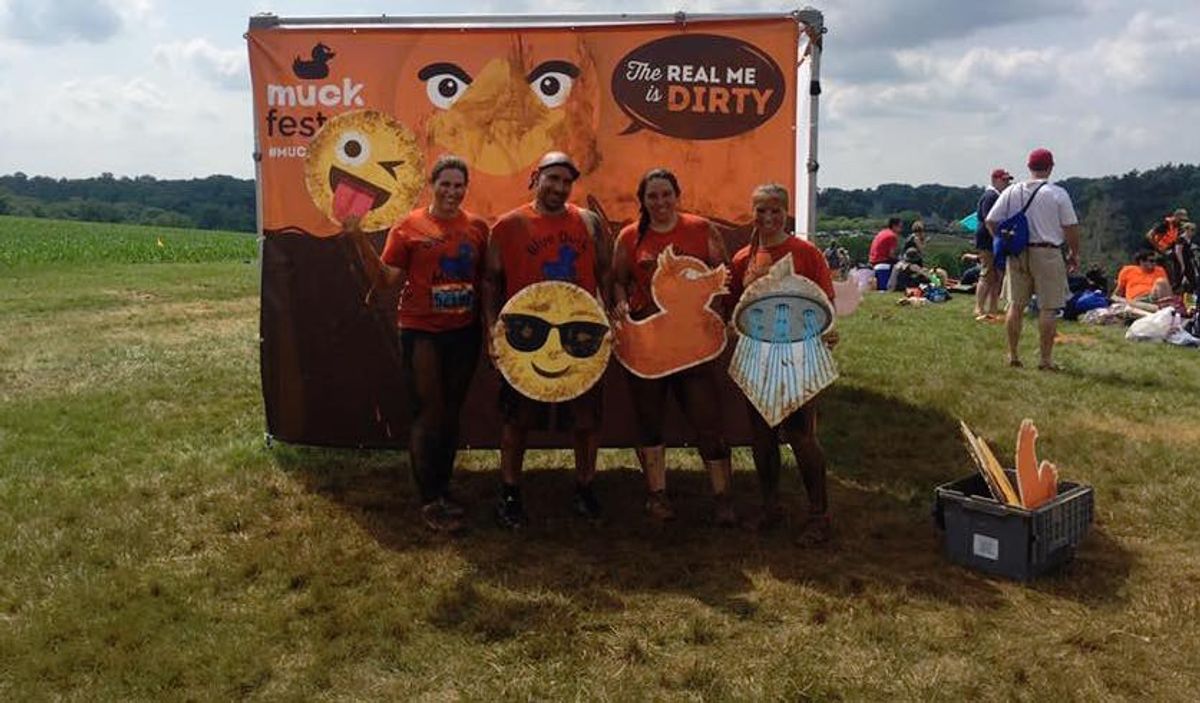 When I say mucked, I mean running in Muckfest MS, the 5k mud run. This is a fundraising event that the MS Society puts on in various cities throughout the United States. It consists of a lot of mud (who would've thought?) as well as fun and muddy obstacles. Their end goal is to raise money towards MS in a fun and mucky way.

Throughout Muckfest we hiked up hills, jumped in pits of muddy water, climbed and slid down mud hills, crawled through mud and walked through mud. With that being said, we were covered in mud the entire time.

Growing up, I spent summers outside, played softball, and rode quads, so I wouldn’t say I was afraid to get dirty. I would however say that I never did and still don’t like getting covered in mud from head to toe. It is slimy on your body, usually has gritty sand and other debris mixed in, and gets crackly and crusty as it dries on you. So I definitely didn’t muck for the fun of the mud.

This was the first 5k I had ever run and I was in no way prepared for it, especially because it was all up-hill. I am also not a huge fan of running. People either tend to love it or hate it, and I would say that I am very close to being a part of the hating crowd. A lot of people tend to do a 5k in order to prove to themselves that they can do it, but I didn’t prove much of anything as we completed the course. So, I didn’t do the run for the fact that I wanted to run a 5k.

When you put running and being covered in mud together, you create situation that is completely out of my comfort zone. The starting line was a pool of mud and we were covered before we even started. You could no longer see our shoes and after a little mud was thrown our pants and shirts began to get covered. We had gross and gritty mud running into our shoes. It kind of sucked, in all honesty, but it was also a lot of fun to struggle through the course with friends. So I mucked for fun.

Then there comes family. Some relatives we are born with, we are related either by blood or marriage. Others we choose in life, and in my case I choose my sister, Lisa. I grew up next door to her and her parents. Growing up, I really didn’t know Lisa due to the large age gap between us. She was in her teens when I was only a baby, but as I began to get older we grew closer and became "sisters".

Lisa was diagnosed with Multiple Sclerosis and has lived with many of the symptoms for years now. When she married her husband, he began doing these runs for her. Four years later, I finally joined him and others in running Muckfest. So I mucked for her.

In the end, I guess I ran for two reasons. Despite the struggles and the fact that I got really dirty, I had a lot of fun doing it. We laughed at each other slipping and struggling, and some team members got plenty of joy out of making the rest of us muddy. In the end, I did it for a more important reason. I did it for a good cause. I did it for Lisa. I mucked for Lisa.