Why Marching Band Made College The Best Four Years Of My Life
Odyssey
CurrentlySwoonLifestyleHealth & WellnessStudent LifeContent InspirationEntertainmentPolitics and ActivismSportsAdulting
About usAdvertiseTermsPrivacyDMCAContact us
® 2023 ODYSSEY
Welcome back
Sign in to comment to your favorite stories, participate in your community and interact with your friends
or
LOG IN WITH FACEBOOK
No account? Create one
Start writing a post
Sports

They're my second family. 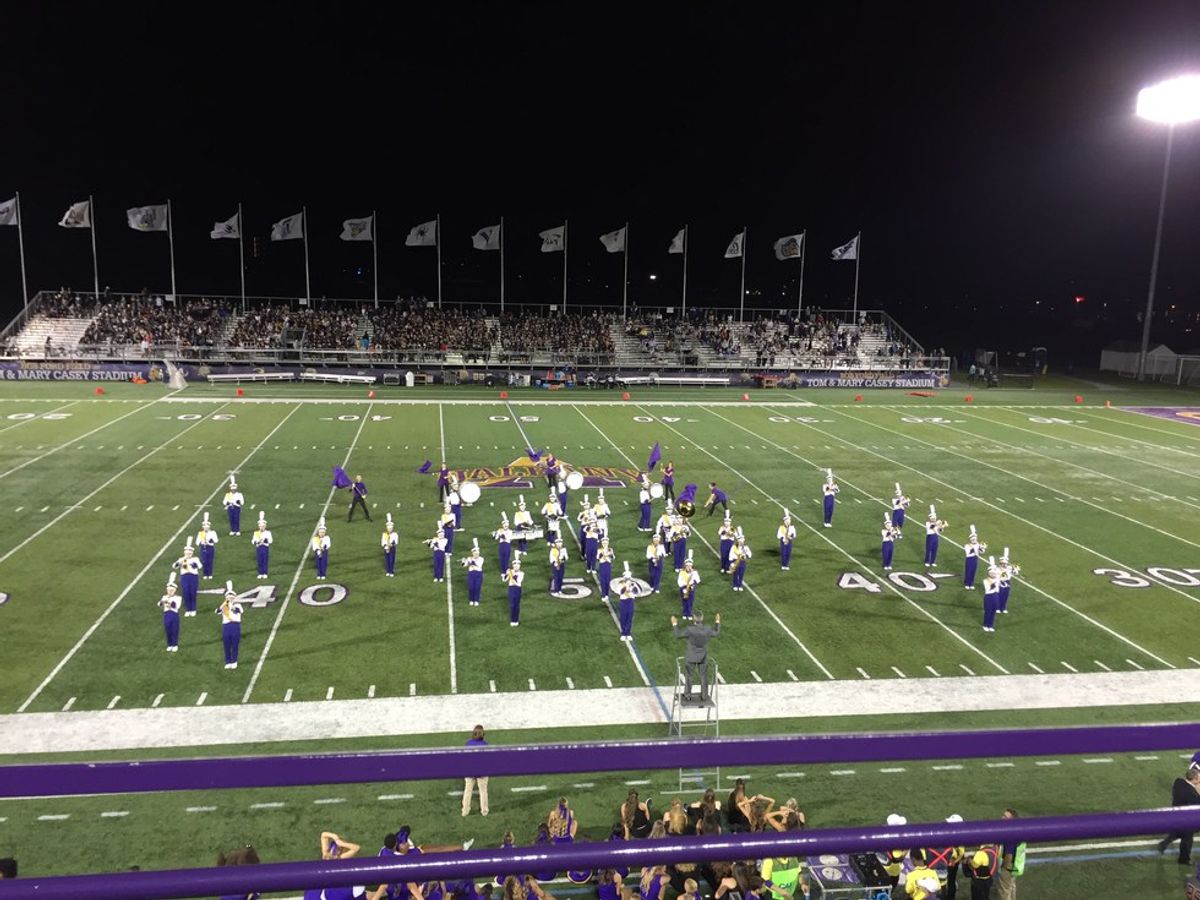 “Family is like music, some high notes, some low notes, but always a beautiful song.”

I’ve been playing the clarinet for thirteen years; music is my life and without it I don’t know what I would do. I was part of my high school’s marching band, marching in parades and playing at a few competitions. When I found out the University at Albany was having their first ever marching band I knew that I wanted to join; it was one way for me to continue the passion that I love, but it was also a great way to meet new people. These people I met changed my life before my eyes.

College marching band is one that I’ll never forget. From going back to school a week early for band camp and practicing for nine hours a day in the blazing heat with very few water breaks, to performing our field show in every kind of weather (and I mean every kind of weather), to basketball season where we I can be obnoxious as hell without getting yelled at, I wouldn’t change it for the world.

I remember the first day of band camp feeling anxious, shy, nervous, excited and more. You have that feeling as a freshman when you realize that you’re on your own; your friends from home are no longer with you, and in fact, you’ve forgotten what it’s like to make new friends because you don’t remember the last time you actually had to do that. But seeing others around me, new to the school and or new to marching band made me feel at ease. Next thing I knew, those that knew each other from other means besides band made me feel at home. Everyone was so welcoming and I knew that for these four years of my life, I was in for an adventure.

Who knew that during my college experience, being a band member would allow me to travel to the NCAA not once, but three years in a row. Each trip was a different experience, one that I’ll remember for a lifetime. From traveling to three different states in a week, to flipping hotel furniture, buying an endless amount of groceries (in fact that was the first thing any of us would look for), to eating cookies and drinking milk on an airplane, I would relive any of those moments in a heartbeat. These moments are the ones that brought every single band member closer together, whether they'll admit it or not.

Just like a family, you have your ups and your downs. There are people you may not like, those you don’t talk to, and those who you’re best friends with, but I know that any single member would do anything for each other. If someone is having a bad day, the band would do something to make that person's day better. If someone is being bullied, that bully better be scared because they'll not only have to fight one person, but fifty. you don't even have to think twice about not having someone to protect you, you just know it, because that's what family does.

“Family is like music, some high notes, some low notes, but always a beautiful song.”

To my director and those who I’m best friends with, those who I'm no longer friends with, those who I don’t talk to or barely talk to, and those that I may not particularly like or get along with, thank you for making these past four years of my life four years I’ll never forget. You’ve shown me what it’s like to be happy, sad, angry, and more; but most of all, you’ve shown me what it’s like to love and be a family. I have become a better person because of all of you. You have made me grow as a person in more ways than one and I can’t thank you all enough. I have found who I am as a person and where I belong. I honestly don’t know how college would have been if I didn’t join marching band, and I’m glad I did because it has changed my life for the better.

QueenRadhi
The State University of New York at Stony Brook
3561