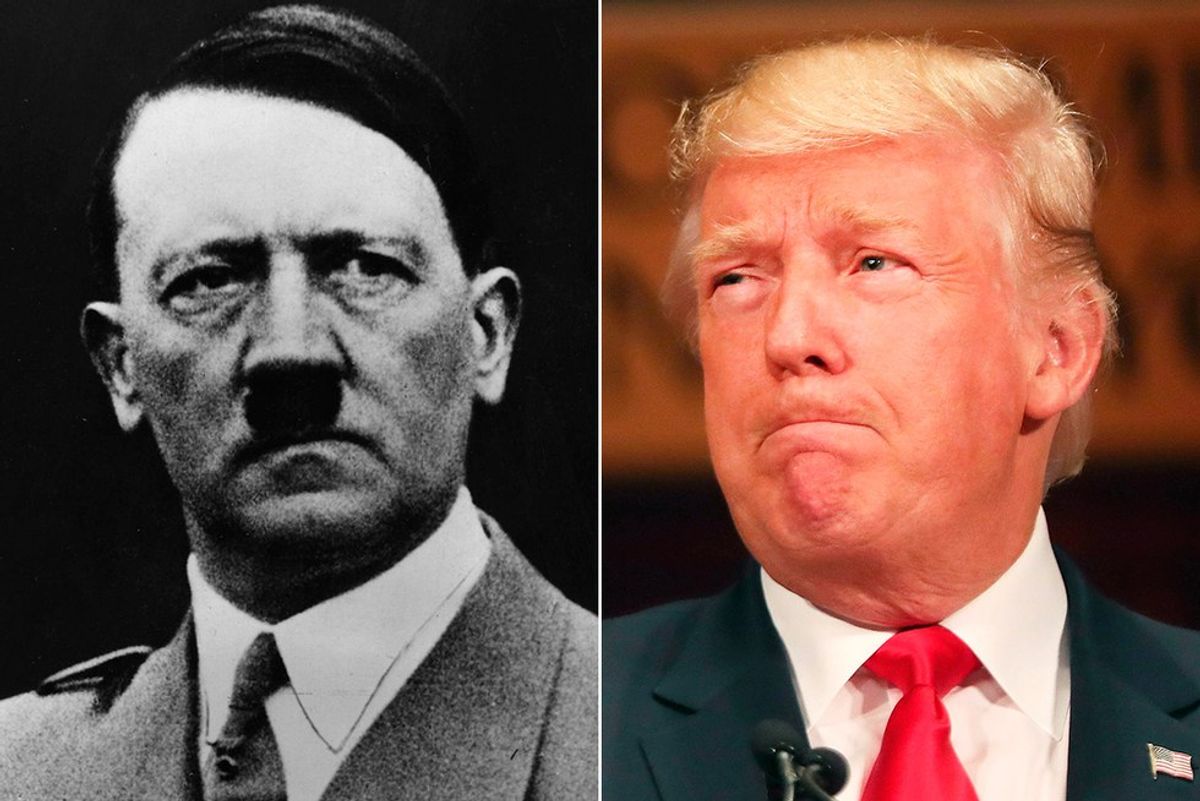 The name Hitler has become synonymous with hatred, bigotry and the worst attributes of all humankind. He is viewed as the personification of evil right next to Satan. He was responsible for the death and tortures of 11 million people including six million Jews. For the most part it is not socially acceptable to go around calling people Hitler. But apparently many people do not understand that concept as former president Barack Obama and other political and religious leaders have been called Hitler.

You disagree with a political leader politics? You passionately dislike a political leader? All of a sudden they becomes Hitler. I just came across a post that compared Bernie Sanders to Adolf Hitler today. One can make comparisons between the most egregious person in the world and Mother Theresa if you dig deep enough. I have sat back for the last eight years watching some conservatives brand former president Obama as Hitler but there is nothing that can make me believe that former president Obama was even close to being near the sphere of Adolf Hitler’s regime. If there was anyone near Adolf Hitler’s regime it would not be Barack Obama but unfortunately for others I cannot say the same.

Most recently we’ve had one of the most divisive elections, in which Donald Trump was elected president. Liberals and democrats then deemed him as Hitler. I won’t play the name game but my opinion is that this electoral process was indeed the most similar electoral and campaign process to Adolf Hitler’s that I’ve ever witnessed.

First off, it is undeniable that this campaign was based on divisiveness and discrimination. Every presidential candidate makes promises and we elect them in hopes that may reach some of those promises. Nothing strange there. But what is strange is that this former presidential candidate made statements such as banning Muslims from this country, implying that Latino immigrants were rapists and murderers and building a wall perhaps, in hopes of keeping the criminals out, because America has no nation born criminals. Then upon this campaign coming to a close, we as a country elected the candidate that promised those things.

It is the beginning of the twentieth century and World War One has ended with the defeat of Germans who are now fearful, and suffering. There is a man whose rise to power left repercussions no one could have ever could predict. He blamed the Jews for Germany’s defeat in World War One, amongst other things. He speaks emphatically, a great orator that preys on the fears of the people. He promises to make Germany great again. He promises to cleanse Germany of the Jews in order to make it purer. This was not just racial hatred; it was a political move in order to make his country safe, essentially to better national security. However, he attempted to make it “safe” at the expense of Germany’s own citizens. He blamed the Jews for many of Germany’s problems although these problems can never be explained with one source.

In modern times we like to play the blame game as well. It appears as though Muslims are blamed for all terrorism, when terrorist acts have been orchestrated and executed by American citizens. (Although, they are not always called that.) Crimes are almost seamlessly placed on the backs of minorities as if they are the only ones who commit them. Gays are blamed for sullying the sanctity of marriage when adultery and domestic abuse in marriage has been covered by many churches. Immigrants are blamed for stealing our jobs. Well sir, if in illegal immigrant steals your job then maybe you shouldn’t be working.

But this is not a dire issue for many because they are too privileged to ever understand why this election was so important. Their privilege is blinding and unfortunately there is no amount of doctorates, or hours of sticking your head in a book that will allow you to understand until you open your eyes and just look around. Or maybe just listen.

Some will never understand how uncomfortable it is to hear people try to rationalize a vote for President Trump and when questioned those people have the gall to be offended for having been called names. As if they did not just support a person who has said worse things to almost everyone who contributes to the success of this country. For some a vote for Trump was a vote for hate and something that extended beyond political positions. I digress.

People have said that President Trump is not like Adolf Hitler because he hasn’t hauled anyone off to death camps and gas chambers and the evilness of Hitler has not manifested in him. But I must point out that Hitler did not start out that way. If he had I’m sure those events would not have transpired as they did.

Liberals are not necessarily comparing Donald Trump to the Hitler that we have learned about today. They are comparing him to the early Hitler. They are talking about the Hitler that promised to make Germany great again by removing Germany’s problems, which happened to be human beings.

Now, I do not believe that Trump is capable of (as a human being) or that he operates under the authority to kill as many people as Hitler did or that he is the personification of evil. Will there ever be a holocaust that is remotely close to the Jewish holocaust? I highly doubt that. But I am just astonished by the similarities between these two elections and the result of the most recent. This was more of a testament to some aspects of human nature I thought antiquated.