Who Is Eliud Kipchoge, The Marathoner Who Almost Ran Sub 2?
Odyssey
CurrentlySwoonLifestyleHealth & WellnessStudent LifeContent InspirationEntertainmentPolitics and ActivismSportsAdulting
About usAdvertiseTermsPrivacyDMCAContact us
® 2023 ODYSSEY
Welcome back
Sign in to comment to your favorite stories, participate in your community and interact with your friends
or
LOG IN WITH FACEBOOK
No account? Create one
Start writing a post
Sports

Who Is Eliud Kipchoge, The Marathoner Who Almost Ran Sub 2?

He is only entering the mainstream spotlight now, but Kipchoge has been a stalwart in global distance running for more than a decade. 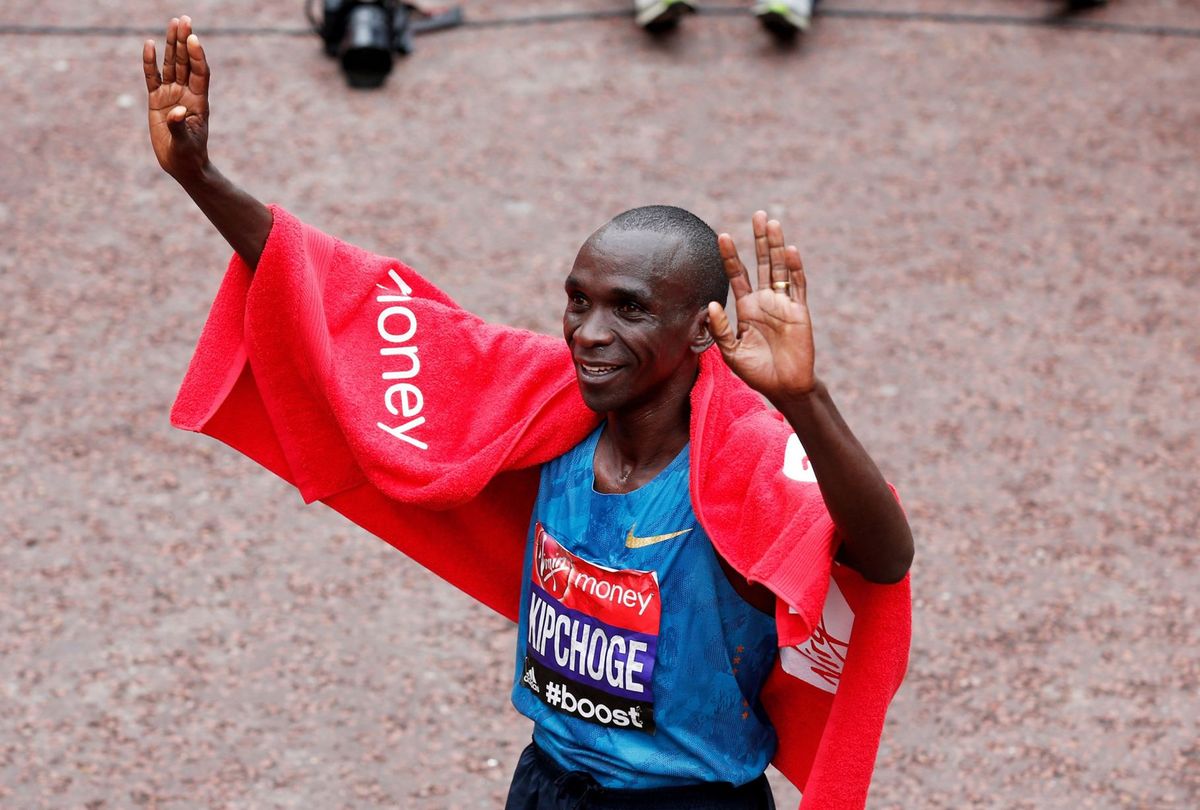 On May 6, 2017, three Nike athletes, Lilesa Desisa, Zersenay Tadese, and Eliud Kipchoge, attempted to break 2 hours in the marathon. From the gun ,experts and amateurs alike were incredibly skeptical. After all, the world record in the marathon was 2:02:57 set in 2014, so this would mean the group would have to run almost three minutes faster than the world record. It was impossible. Nike incorporated various advantages into the attempt to market their new "novel" products, including rotating out pacers, an uncertified running course, andand controversial new running shoes that may soon be ruled illegal by the IAAF, which allegedly make runners 4% faster than they would be with the next best shoes.

By the halfway point, the attempt looked like a somewhat of a lost cause: Lilesa Desisa and Zersenay Tadese had already fallen off the pace. To some degree, it seemed like a marketing joke when the cameras would only focus on the Nike shoes and gear on the runners' legs, instead of the runners themselves. Soon, it seemed, Kipchoge would fall off the pace (4:34 miles) as well, since it was faster than anyone had ever run before.

However, Kipchoge looked beyond relaxed at the halfway point. Even at 30 kilometers, almost three quarters of the way through the race, he still looked relaxed, and that's when my friends and I who watched knew: this attempt was going to be something special. When Kipchoge started to fall off the pace, we never stopped watching because he was still going to run a world record by at least 2 minutes, a progression not ever seen at the distance. Kipchoge only looked like he was truly grimacing and in pain after 35 kilometers, and finished the race at 2:00:26, a world record by 2 minutes and 31 seconds.

Although the record will probably not ratified, the other people in my living room (also runners) came to a consensus: this was one of the most impressive running performances since Roger Bannister breaking the four minute mile in 1954. Although Kipchoge didn't go under 2, he was so close for so long that he made us realize it wasn't impossible.

Eliud Kipchoge's transcendent performance will make him soon to be a household name and one of the most popular in the running world. While his popularity rose slightly from his gold medal triumph in the Olympic marathon, what few know is that Kipchoge has been one of the world's elites in distance running for over a decade, constantly overshadowed by some of the other world's greatest runners of all time.

Before Kipchoge's marathon career, he specialized in the 5000 meter race on the track, and he started his championship career at 18 with a victory in the junior race of the IAAF Cross Country Championships, He proceeded with a bang in the 2003 World Championships 5000m. In the field was Kenenisa Bekele, the current 5000 meter and 10000 meter world record holder and double Olympic gold medalist in both events. Also in the field was Hicham El Guerrouj, the world record in the mile and 1500 meter race. So it was a clear victory for either one of the two track behemoths, who earlier in the meet had won the 10000 and 1500 meter races respectively. Both legendary runners are also known for being incredible finishers - their "kicks" notoriously inspire nightmares in their competition.

Going into the last lap, it is a familiar formation - El Guerrouj followed by Bekele. But Kipchoge is right behind the two, and he makes a sudden move to pass Bekele. Then, a gap builds between Kipchoge and El Guerrouj, and for a moment, it seems like El Guerrouj has the race won. At the 200 meter mark, with Kipchoge and Bekele still about 5 meters behind El Guerrouj. The announcer mentions Kipchoge's name for the first time in the race, as if he didn't know the name of the previously unknown 18 year old's name until he was a serious contender to win. With 100 meters to go, both Kipchoge and Bekele make up the distance on El Guerrouj, and with 50 meters to go, Bekele drops and Kipchoge is neck and neck with El Guerrouj. He out-leans El Guerrouj at the line and beats him by only .04 seconds, with a time of 12:52.79, to this day the fastest championship 5000 meter time in history.

Kipchoge ascended to the top levels of the sport immediately - in the 2004 Summer Olympics, it seemed like the 5000 meters would, again, be one of the most exciting track races in the Olympics. But the 2003 gold medal at the World Championships would be Kipchoge's last gold medal at the distance. He would fall to Bekele and El Guerrouj as they battled in the 2004 Summer Olympics, his finishing speed seeming to lag from his 18-year old form. In 2005, he would get fourth and no medal. In 2007, he would again get silver, but this time at the hands of Kenyan turned American, Bernard Lagat in the 5000 meters. In 2008, in his best championship performance since 2003, Kipchoge earned an Olympic silver medal to Bekele, when Bekele's finishing speed was so devastating that he dropped Kipchoge by 6 seconds on the last lap.

For some, it may have seemed like an end to Kipchoge's career, as in 2009 and 2011, he would get fifth and seventh respectively as younger and fitter 5000 meter runners displaced him. In some ways, it was the end to his track career, but Kipchoge then started specializing in road races as he aged. After a string of similar disappointing performances, it in distances like the 5 kilometer, 10 kilometer and half marathon races, it again seemed that the greatest highlights of Kipchoge's career was being right behind and in the shadows of all-time greats in Bekele and El Guerrouj. From 2008 to 2013, the only medal Kipchoge would earn was a silver at the 2010 Commonwealth Games in the 5000 meters.

Then came Kipchoge's seamless transition to the marathon, running his debut at Hamburg in 2:05:30, beating the field by over two minutes. In only his second marathon, Kipchoge ran a personal record by a minute and 25 seconds to get second in 2:04:05, behind Wilson Kipsang, his compatriot (and pacer in the sub 2 attempt), who ran a world record on that day. In April 2016, Kipchoge would run an absurd time of 2:03:05 in the London Marathon, to this day the third fastest marathon of all time.

Finally came, perhaps, the pinnacle of Kipchoge's marathon career: winning the Olympic marathon. Not only did he win the race, but he soundly defeated his competition, beating second place Feyisa Lilesa by over a minute, and he put all that time on Lilesa over the last five miles. To this day, Kipchoge has won seven of his eight official marathons, proving, as he did against El Guerrouj and Bekele when he was eighteen, that he is not just a fast runner, but a strong competitor and a beyond competent racer.

According to his former coach, Patrick Sang, the greatest thing about Eliud Kipchoge is his love of the sport. Growing up in a family rural Kenyan farmers, Kipchoge has been dedicated to running his entire life, from carrying milk to sell in his parents' market, to running 3 km to and from school every day, to now, when he runs 26.2 miles on the roads. He has a book - yes, book - where he has logged every single day of training as a professional.

We have seen the rise, fall, and resurrection of Eliud Kipchoge as a runner, and for someone who was seen as "washed up" and forgotten and stay motivated takes a person that really loved the sport from the beginning. For each runner who has a down year or is struggling to stay motivated through an injury or other adversity, Kipchoge is the model.

It genuinely surprised me that a human being ran a marathon two and a half minutes faster than the world record, even with all the asterisks on the mark. But what didn't surprise me was that Kipchoge was the one to do it, as he's shown us time and time again that he's defied expectation. He may have fallen short of sub 2, but his performance showed us, again, that running sub 2 is possible, that that human limit that we impose upon ourselves is breakable.