To The Trump Supporters At Barnard College

To The Trump Supporters At Barnard College 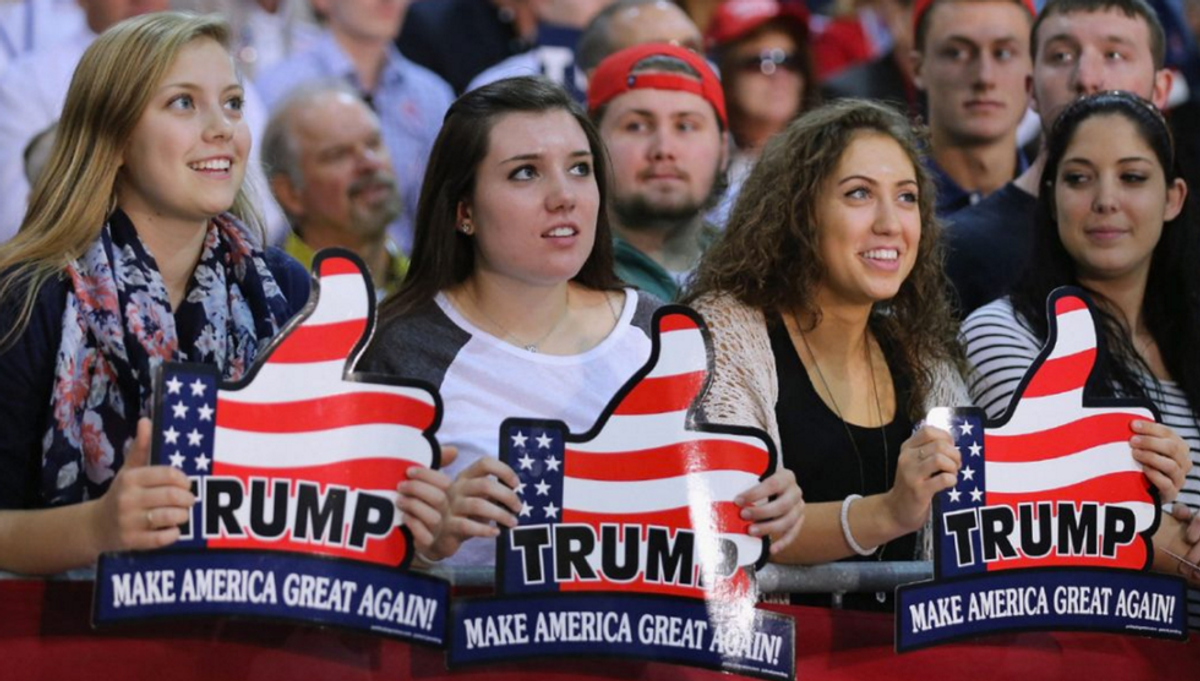 I have made an interesting discovery about all of you recently! Turns out that you're all Democrats - or at least, those of you who share political posts all voted for Clinton. Turns out I live in some crazy bubble of people who all supported Clinton, thought she would win, and are insanely disappointed that she didn't.

The night of November 8th was a fateful one here at Barnard. There was a viewing party down the hall from me, and I could hear the screams and, eventually, bitter sobs as the night progressed towards Trump's eventual victory. Some of the more memorable quotes from that night include:

"F**k Trump! Someone should murder him!"

"Who is even voting for him?! These uneducated people shouldn't be allowed to vote!"

Don't you love the sound of democracy in one of the most liberal colleges in America?

Today and yesterday, many of my fellow students and friends attended protests against Trump's presidency, including such events as "NYC Against Trump - Planning Meeting" and "Point and Laugh at Trump Tower." Finally, coming up on January 20th, my friends plan on attending "Not My President" - the rejection of the presidency, of course, being a natural and legitimate reaction against the democratic system that has sustained America's leadership for hundreds of years.

"Point and Laugh at Trump Tower." Don't you love the valid, intelligent strategies supported by my fellow Ivy Leaguers?

My friends also - after exhausting themselves by staying up until 3:00 in the morning to watch the election, which of course was a vital and necessary move for the good of the country - requested that class be cancelled the next day, and that tests be postponed. Barnard was only too happy to oblige.

I should be keeping my audience in mind while I write this - all of you vehemently Democratic Facebook friends. But I can't help myself. I want to write this the way I am writing it now. It's important to me. I guess I'd better just hope that the sarcasm goes over your heads.

Last summer, my step-grandfather took me aside to have an important discussion about the upcoming election. He is a third- or fourth- generation Floridian, speaks with a heavy southern accent, and was a watermelon farmer before he retired.

"Baila," he said seriously. "I know that you're an intelligent girl. I trust you to make the right decision. Don't let that liberal college sway you. Trump is good for the country. He's good for the Jews." And so on.

I ignored his advice. I voted for Clinton for reasons that you, my Facebook friends, can find literally everywhere you look. But I continue to respect my step-grandfather and everything he stands for. I respect his right as an American to decide who should be the next president of our country, as much as any Ivy League graduate.

Today, we had discussions in two of my classes about the effects of the election - mostly, its effects on people's mental well-being. In both classes, it was assumed that everyone there was a Clinton supporter. No one spoke up to say otherwise. There are two possible reasons for the silence of Barnard's Trump supporters:

2. They do not feel comfortable speaking up about their political beliefs.

I happen to know at least one person in one of those classes who voted for Trump. I will not suggest reasons for her silence.

What does freedom of speech really mean?

What are you - by mocking any person who disagrees with you - choosing not to hear?

I'll leave you with these questions, friends, to guide you into the coming apocalyptic Era of Trump. Consider them wisely. Consider the hundreds of thousands of people who disagreed with you, and ask yourselves what you are not hearing. And for those of you who did silently vote for Trump - those of you who choose not to publicize your views, who choose not to brave the endlessly hateful responses of our fellow internet users - I stand with you. I support your choice.