An Open Letter To Democrats, From A Young Republican
Odyssey

An Open Letter To Democrats, From A Young Republican

It's time to practice what you preach. 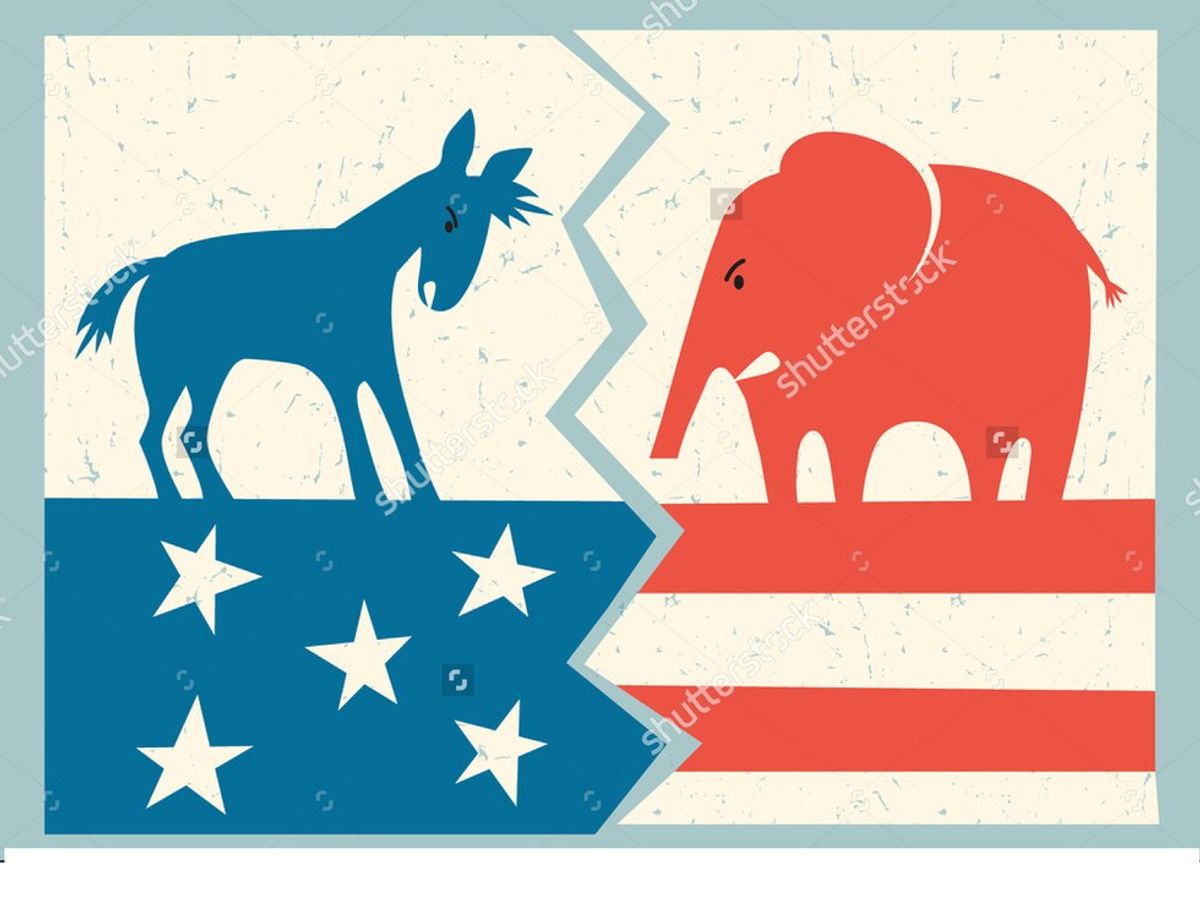 If you are a Democrat and have been a little less than friendly towards those on the right recently, this article is for you.

As a young Republican, I know there will always be people who don’t agree with me. In the past, I’ve had to hold my ground and defend my beliefs, despite knowing I’m going against the status quo. However, nothing could ever have prepared me for the onslaught of negativity, stereotyping, and pure hate I have received from the left side since the night of the election. I expected a bit of anger, but this? This is just unnecessary.

November 8, 2016 will go down as a very historic day in our country’s history. We elected a new President of the United States, a man whose campaign most hoped was only a joke. Against all odds – the biased media, the incorrect polls and pundits, and many others – he somehow came away with the victory. To make something clear, I did not expect Donald Trump to win. I was fully prepared for and had even accepted the reality that there may be another Clinton presidency. And to make another thing clear – just because I voted for him (yeah, I did, just like 60 million other Americans) does not mean he was my first choice for a Republican candidate. It does not mean I like the names he has called women or the crude, derogatory language he’s used. And it sure does NOT mean I am sexist, homophobic, xenophobic, Islamophobia, or whatever else you would like to call me. What it does mean is that I made my own decision and exercised my right to vote. I voted for Trump because Clinton, frankly, is the most corrupt political candidate to have ever come so close to the presidency. She cheated in the primary election by receiving questions in advance; she seriously risked the American people’s security over thirty thousand emails; her negligence played a role in the deaths of four Americans – four lives lost – in Benghazi; she uses almost all of her foundation money for personal gain instead of charity; and she helped Bill Clinton get off the hook by persecuting and degrading his rape victims (and you say she’s for women?!). And I could keep going. Her ideas go against everything I believe in – abortion is probably the biggest one. Not to mention, some of her policies just wouldn’t work – anyone who has taken an introductory economics course should know that. (If you haven’t, here’s a spoiler: increasing the minimum wage actually hurts the country’s economy as a whole, and will eventually increase unemployment.) To summarize, I am against everything about Clinton - her values, her beliefs, and her actions. And while I may not support the man himself, I do support Trump’s political policies. So if you needed a reason why I (and many, many others) voted for him, you got it.

But the main reason I’m writing this isn’t to talk politics. I’m sick of all the fighting it causes, and I want it to stop – that’s the reason. Like I said earlier, I was fully prepared for Clinton to win the presidency; it seems like your greatest error in this whole election, Democrats, is the fact that you didn’t pause to think that maybe, just maybe, you would lose. Because if you had, the hate us Republicans have been receiving from your left side surely wouldn’t be as great. If you had stopped to think that victory wasn’t guaranteed, that Clinton was no more entitled to it than Trump was – maybe the outrage over her loss would be less.

Essentially, though, what I’m trying to say is this: the hate from the left needs to stop. Trump won fair and square in our free and democratic society, and that’s it. If Clinton would have won, I can guarantee that there wouldn’t be rioting in the streets. At least, there weren’t riots when Obama won – at least not in as great a quantity. And, perhaps even more importantly, the individual hate needs to stop. Personally, I have been attacked on social media just because of my political views. I have essentially been called racist, sexist, even “a bad person,” just because I stated that I didn’t support Clinton. And I’ve seen many other people being attacked in similar ways. And, Democrats (at least the ones of you that are a part of these despicable attacks) – wasn’t your candidate’s motto “Love Trumps Hate?” Didn’t she always say, “When they go low, you go high?” I have to ask…where are these ideals now that you once held in such high esteem, and why aren’t you putting them into practice? It seems like the only people you’re willing to love are those that agree with you.

For all of you who are steaming from the ears right about now, take a step back. Some of your idols – like Barack Obama – have accepted Trump as president, and have accepted that people voted for him. For Pete’s sake, even Miley Cyrus, the most liberal person I can think of, said she accepted him. Why can’t you do the same? Don’t be a hypocrite; if you stand so much for love and acceptance, then why can’t you accept the people who didn’t vote for your candidate? And why do you assume, just because we voted for Trump, that must mean we’re all racist and sexist bigots? All of the people that I know who voted for him had the same reasoning as me – we liked his policies, and we choose him, even if we did not like his personal life. But no matter our reasoning, that still does not give you the right to call us hateful names or decide that we’re bad people. Because sorry, but you do not have the right to judge whether someone is good or evil. There are other viewpoints besides yours, and I think it is about time that you start practicing ACCEPTANCE instead of just preaching it.

And if you can’t find it in you to accept us, at least don’t hate on us. Your hate doesn’t hurt us anyway – we bounce right back, because we know it’s time to keep pushing forward to a brighter future. The reality is in front of you, and it’s time to understand that and move on. Give President-elect Trump, and us, a chance. Because I promise you, you are in for the ride of your life – and we’re just getting started.