William Shakespeare's works need to have a bigger focus 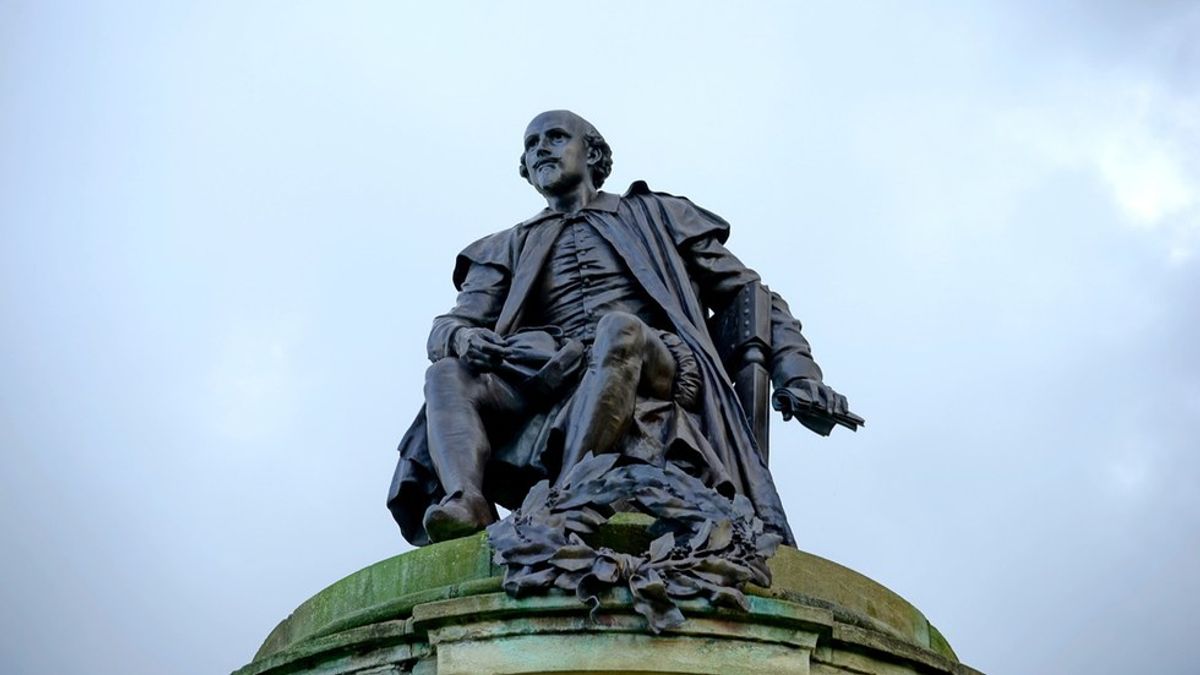 “To be or not to be- that is the question. Whether ‘tis nobler in the mind to suffer the slings and arrows of outrageous fortune or to take arms against a sea of troubles, and by opposing end them. To die-to sleep- no more; and by a sleep we say end the heartache, and the thousand natural shocks that flesh is heir to. ‘Tis a consummation devoutly to be wish’d. To die- to sleep. To sleep- perchance to dream: ay, there’s the rub! For in that sleep of death what dreams may come when we have shuffled off this mortal coil, must give us pause. There’s the respect that makes calamity of so long life.

For who would bear the whips and scorns of time, th’ oppressor’s wrong, the proud man’s contumely, the pangs of depis’d love, the law’s delay, the insolence of office, and the spurns that patient merit of th’ unworthy takes, when he himself might his quietus make with a bare bodkin? Who would these fardels bear, to grunt and sweat under a weary life, but that the dread of something after death- the undiscover’d country, from whose bourn no traveler returns-puzzles the will, and makes us rather bear whose ills we have than fly to others that we know not of? Thus conscience does make cowards of us all, and thus the native hue of resolution is sicklied o’er with the pale cast of thought, and enterprises of great pith and moment with this regard their currents turn awry and lose the name of action. –Soft you now!

With this regard their currents turn awry the fair Ophelia! - Nymph, in thy orisons be all my sins rememb’red.” Hamlet Act III Scene I. This is one of Shakespeare’s most famous monologs. William Shakespeare’s plays and sonnets are still considered masterpieces to this day. Students are taught Shakespeare starting in eighth grade, A Midsummer Night’s Dream, and the case with Flushing Schools, it ends in eleventh grade with Macbeth. But, only one piece of Shakespeare’s works is read each year. Just one. If students are wanting to further explore and read Shakespeare, they need to wait until college.

Why are we stopping the further involvement in reading the greatest works of all time? William Shakespeare’s plays and sonnets show us so much and reading his works can help evolve students. Shakespeare needs to be taught more in schools because his plays reveal modern day issues, he created a large majority of the English language, and it gives a look into human nature.

To begin, if we look at Shakespeare’s plays we see issues that are happening today. It shows students that issues we face today were also issues during the Elizabethan era. For example, suicide. It happens in Romeo and Juliet when the two young (very young) lovers end their lives. Or in Antony and Cleopatra. There are five suicides including Antony and Cleopatra. This is a touchy subject but if we look at the statics it shows how prevalent an issue this is. Every 13 minutes, one person dies due to suicide(SAVE).

Suicide is also the second leading cause of death for 15 to 24 years old Americans(SAVE). Although the characters in Shakespeare’s plays are fictional, they still dealt with suicide. It shows that even back in Shakespeare time, suicide did happen but wasn’t ever addressed. Another issue addressed is greed and ambition. Look at our politicians. They are a prime example of this. We hear constantly of one of them doing something in order to get ahead. Whether it be taking money from the party or sleeping with another politician, greed and ambition are still very relevant.

Next, Shakespeare created a lot of the English language. Think of some of the insults we use today. One example is from Richard III, “Out of my sight! thou dost infect my eyes." What this saying, in modern day English, is “You make my eyes burn.” This has been used many times by people I know and it’s usually as a funny, I-don’t-actually-mean-it, insult. We also can thank Shakespeare for words like uncomfortable, swagger, bedazzled, addiction, and arch-enemy(Panganiban). We are supposed to be taught the English language in English class, right? So, teaching the origins of some words that Shakespeare created is helping the students have a better understanding of the English language.

Third, he gives us an insight into human nature. Let’s use Macbeth as an example. We see the dark side of a human wanting more. Macbeth kills his friend, King Duncan because his wife wanted more. And humans all have a dark side that comes out. Although it’s not often, it will make an appearance from time to time. The other insight we get is love. Romeo and Juliet illustrates this perfectly. When reading this play, we are all reminded of our first love. Although it is not as dramatic and devastating as theirs, we are reminded of a time where we felt true and utter bliss. Romeo and Juliet also shows how teens feel with the heavy hand of their parents on them.

The feeling of constraint and becoming an adult and wanting to make adult decisions but our parents and teachers still treating us like children. Another example of Shakespeare’s work showing human nature is Hamlet. In this play, Shakespeare shows us the darker side of human nature such as the need for revenge. How is this relevant to high school teens? They have their own way of revenge by spreading rumors. We’ve all heard stories that aren’t true but a person has made it up in order get back at someone else. All in all, Shakespeare really outlines the darker side of human nature in most of his works.

On the other hand, students argue that Shakespeare is too hard to read and understand. The old English is a totally different way of speaking compared to our modern day speech. But, there are resources out there to help. No Fear Shakespeare is a great investment. It puts the Shakespeare Elizabethan language right by the modern day translation. The books are extremely helpful and teachers should get classroom sets for their Shakespeare units. Another issue may be the teacher. There are teachers that don’t like to teach Shakespeare and take it out on their students. We need to reverse this mentality.

In conclusion, William Shakespeare needs to be continued and be taught more in schools because his plays show high school teens modern day issues, he created a lot of the English language that we still use today, and he gives us a look into human nature. He has been taught for years in classrooms and why are we all of a sudden pulling it out of our curriculum? Shakespeare is a historic icon and doesn’t need to be suddenly pushed away. So, bring him back please. He helps our students recognize what good, honest literature is.
Report this Content
This article has not been reviewed by Odyssey HQ and solely reflects the ideas and opinions of the creator.