Time For Orlando To Bring Back The Magic
Odyssey

Time For Orlando To Bring Back The Magic

This Magic fan is ready for a turnaround 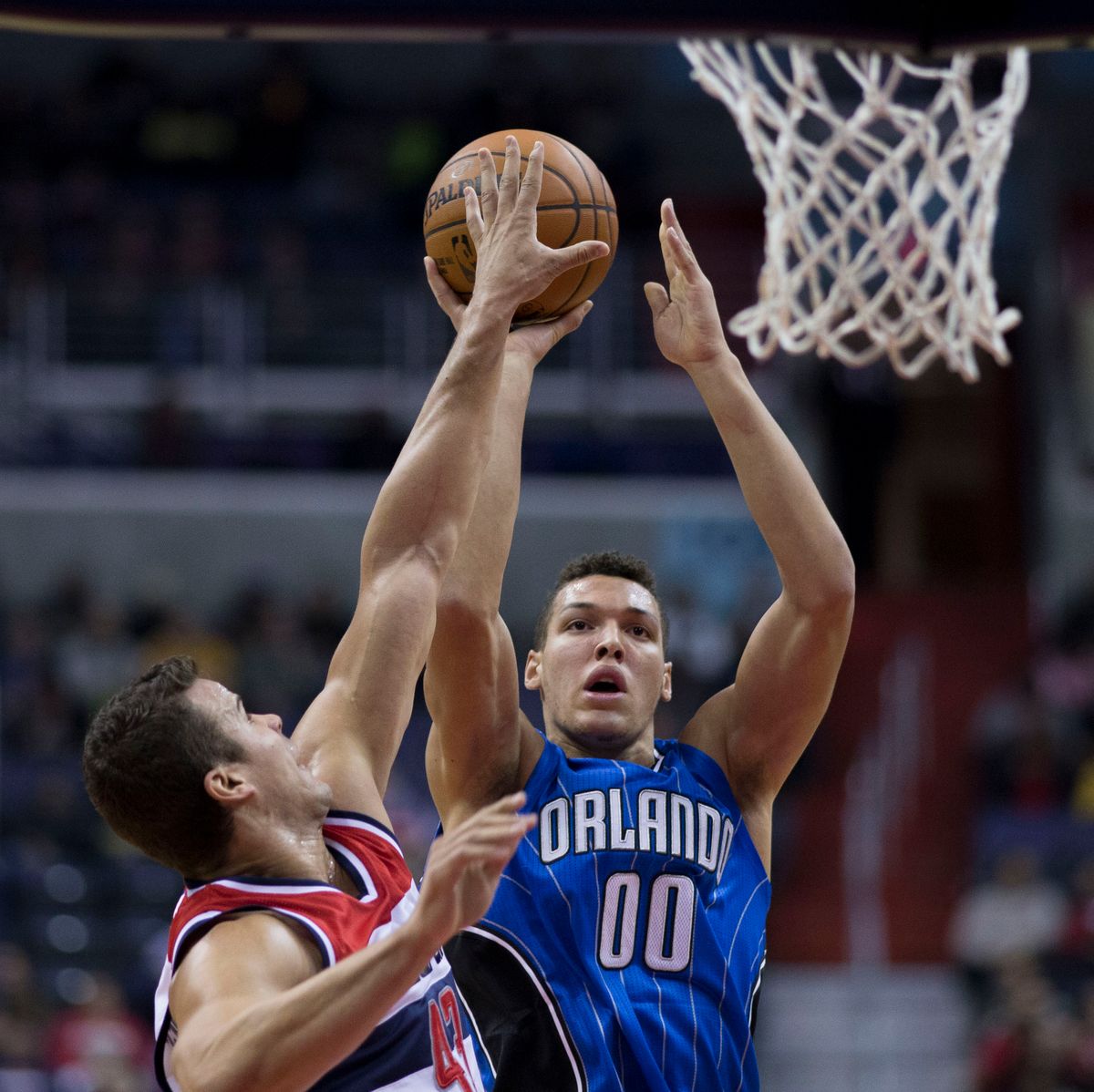 They say Orlando and the Disney Kingdom that inhabits it is "the happiest place on earth." Well, it’s been six years since my team, the Orlando Magic has been to the playoffs, and things are anything but happy.

Until recently, I’ve felt pretty spoiled as a Magic fan. We’ve had Shaq, Penny, Grant Hill, T-Mac, and Dwight all in the span of just under thirty years in our existence as a franchise. That many stars in so few years are incredible. Orlando has also made two finals, won the lottery three times, and have had some pretty exciting near-misses (What if Shaq stayed? What if Penny didn’t have Pringles for patellas? What if Grant Hill got a decent shoe to support his weak ankles? What if the refs weren’t trying to give Kobe titles? What if Vince Carter wasn’t trash in 2009?).

Dwight Howard, the last Orlando star, was traded following the 2011 season. Since then, one of the most painful rebuilds has ensued. Teams with similar timelines following their own rebuild launches are competing or beginning to compete (Boston Celtics, Philadelphia 76ers, Los Angeles Lakers) while Orlando has been left behind. Their poor decisions, being bad but not bad enough to land a top pick, and downright bad luck have sunk Orlando and stolen the spark of the franchise. Orlando has yet to crack forty wins, and their franchise lacks many inspiring options. With new management in place, this is the summer to turn it all around.

The blueprint for fixing a franchise in the NBA is taking risks on high-risk, high-upside free agents, shipping off old regime players, and through the draft. Orlando has tried to do this is in the past, but has lacked the necessary patience to see the plan all the way through. Trading lottery picks Victor Oladipo and Domantas Sabonis for Serge Ibaka after a semi-promising thirty-five win season was exactly the short-sighted decision that continually crippled the organization during the old management regime.

Orlando's free agent decisions have been sub-par as well: Bismack Biyombo was exactly the type of risk to take as a former lottery pick, but Orlando paid way too much for his services. Conversely, signing Jeff Green to a one-year, 15 million dollar deal was a lose-lose agreement. If he broke out (Green was a top 10 pick himself), Orlando would be stuck either losing him to another team or destined to bring out the wheelbarrows of money to keep him around. If he busted, Orlando was tied to a 15 million dollar anchor that tied up cap space. Making smaller money, medium year deals is the route Orlando must take, like the contract they handed to Jonathon Simmons.

Simmons showed great promise on the Spurs during the 2017 postseason, and the Magic handed what was considered a below-market value contract to Simmons (3 years, 20 million). He rewarded that good faith by setting career highs nearly across the board (including 13.9 PPG in 50 starts). Now, Orlando can use him as a potential glue guy or trade bait.

Orlando hasn't been a top free agent destination in years, and won't be this summer given their basketball situation and designation as a small market team. Players like LeBron and Chris Paul, therefore, are only pipe dreams. Taking risks on a bigger free agent that is young, like Jabari Parker or Zach Lavine, and players looking to rehabilitate their value like Mario Hezonja (improved a lot this year) or Rodney Hood could be in the cards. I predict realistically that Hezonja is brought back and Hood is signed on a flier.

At this point, guys like Evan Fournier and Bismack Biyombo are untraceable due to their bloated contracts. Orlando may as well keep them around and hope they turn it around into being worth anywhere near their contract values. Nikola Vucevic and Terrence Ross have both been casualties of the changing basketball tides, and need to be traded. The Ross trade didn't turn out as expected, and the Magic need to cut their losses while Ross still has a speck of value. Vucevic, meanwhile, has a good contract but needs to improve his Swiss-cheese defense and sulking attitude. He's been a net detriment for the Magic in recent years, and it's time for Orlando to move on from the Magic's longest-tenured player and lone prize left from the Dwight Howard trade.

The biggest source of optimism for Magic fans is easily the draft. Orlando doesn't have the best track record recently with their high draft picks, but I think completely attributing that to management is a poor take. Every year, Orlando has taken a player that most experts have pinned to them based on value and potential. The Magic have often gotten unlucky, falling just outside of when the elite prospects are off the board (like in 2014 when Andrew Wiggins-Parker-Joel Embiid went 1-2-3 and Orlando were right outside at four. Sometimes the lottery taketh away). Orlando got unlucky again this year, falling to pick six when the truly elite prospects are likely to go in the top two. However, taking a gamble on Michael Porter Jr., who is likely to slide due to a back injury and poor play during his few games he did play, could be a huge coup for Orlando.

Porter was often considered a top two pick in the NBA draft leading up to the season. His shooting, ability to get to the rim, and size (6'10" and a 7' wingspan) look to give him a Harrison Barnes floor and a Kevin Durant upside. Porter has had some great influences in his life, including former Blazers star Brandon Roy, and with some conditioning in the NBA, has all the tools to be a perennial All-Star. Essentially, he could be everything Michael Beasley was supposed to be.

Given the Magic's current roster construction, Porter's inclusion at small forward could be anything but smooth. Currently, the only true building blocks on the Magic roster are Aaron Gordon and Jonathan Isaac. Gordon showed real progress this past year on the Blake Griffin comparisons he has received, improving his passing, scoring, rebounding, and most importantly, his shooting. Gordon is a restricted free agent and should be returning. Ideally, Gordon is a good number two or three option on a team, not the focal point he is currently. Gordon is strictly a power forward. Isaac, in my opinion, is playing out of position.

The Magic, in the few games he played after sustaining various injuries, cast him as a small forward. However, playing him at center may be best for him and Orlando. Isaac is a smooth, 6'10" athlete with a near identical profile to center Clint Capela (also 6'10" and a matching 7' wingspan). Both are exceptionally strong defensively, and show real potential as rim-runners and passers in a pass-happy offense. Isaac averaged 12 points per game, 8 rebounds per game, and just over 1 block and steal per game in college, all while shooting 34.8 percent from three. Isaac with a position swift projects to be Capela with a jump shot -- a true basketball unicorn and a real asset for Orlando. That position movement would allow Porter to man the small forward position.

Orlando has been down on its luck lately, but it has the perfect opportunity to turn it around. Strolling out a lineup of DJ Augustin, Evan Fournier, Michael Porter Jr., Aaron Gordon, and Jonathan Isaac wouldn't be good this year, but with another draft pick and a year of seasoning, Orlando could be on its way to being a team with championship potential. The Hawks, Heat, Hornets, and Wizards have been beating up on Orlando in recent years. It's high time Orlando brings back a little magic.