I never thought I would say this, but I'm pulling for the Clemson Tigers tonight. 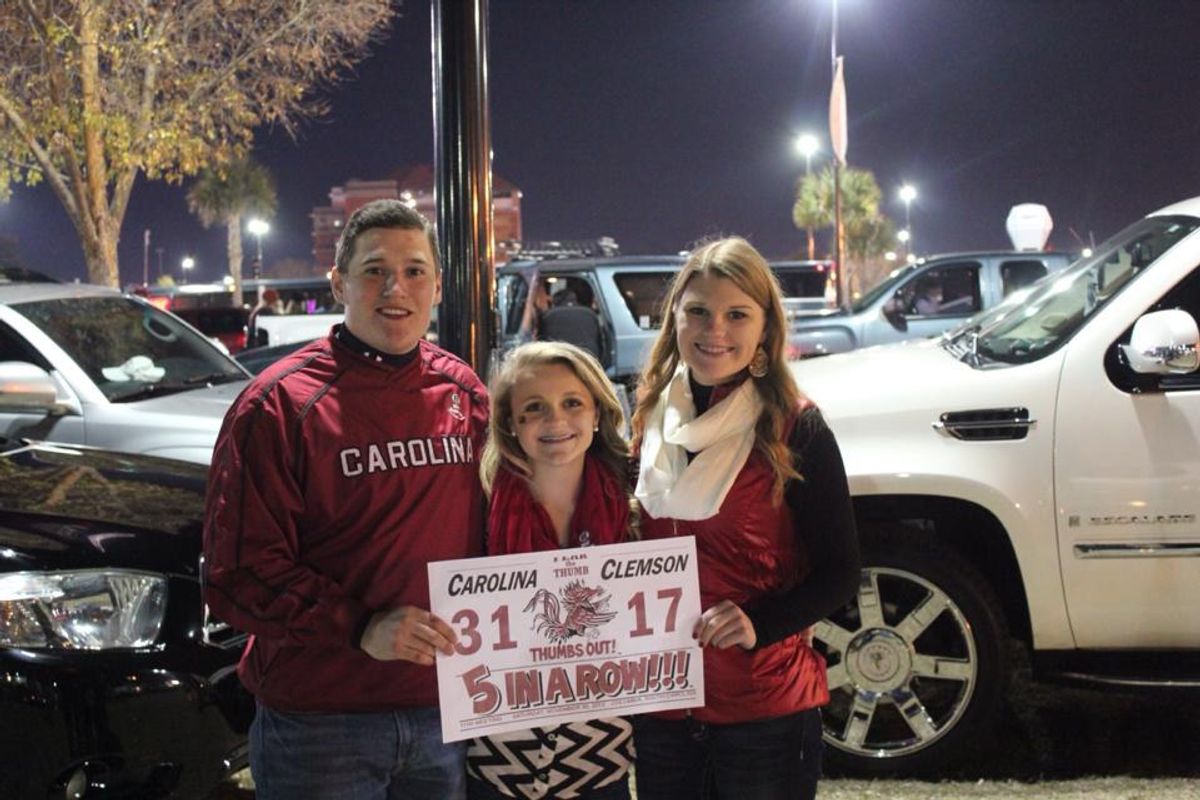 I have been a die-hard University of South Carolina fan since I was born. I have been raised by going to Columbia almost every Saturday that there was a home game to watch the Gamecocks play. It was never an option to pull for another team, garnet and black ran in my blood.

So, this season didn’t turn out as planned. We’ve had some bumps in the road which ended with a horrible defeat by the Clemson Tigers. I avoided Facebook and other forms of social media after the game because the rivalry is just that bad. I can’t stand to see Clemson and Carolina fans fight over a screen about their teams.

For as long as I can remember, the in-state rivalry has been brutal. I can remember having Clemson/Carolina day at school where you would wear your team colors. I always remember there being more Clemson fans in my class than Carolina, which caused a couple of students to “gang-up” on our team. I’ve been defending the Carolina Gamecocks since second grade.

Growing up, I always cheered for the team that was playing against the Clemson Tigers. I’ve attended many Clemson games and always was a good sport, wearing Clemson colors and even the occasional Clemson paw on my face, but secretly deep down, I was pulling for the other team.

But as I’ve gotten older, I’ve started to realize that the in-state rivalry isn’t so bad after all. I have many friends who attend Clemson University and I’ll admit, I love a good trip upstate to hang out with my Tiger friends.

Don’t get me wrong, I still completely despise the Clemson Tigers, but I do have to say that I will be pulling for them in the 2017 National Championship Game against the Alabama Crimson Tide.

I know, I’m crazy. A USC fan should never, under any circumstances, pull for the Clemson Tigers. But, I am going to tonight. I’ve realized how big of a game this is and how awesome it is to have a team representing our state in such a big game.

Any other day of the year, I will tell you that I pull for anyone else other than the Clemson Tigers. I even wore my roommate’s Alabama t-shirt last year during the National Championship game. But this year, it’ll be different.

I wish the Clemson Tigers good luck tonight as they have their rematch, which is well-deserved. As much as it hurts me to say this, they are a great team and they have worked very hard to get to where they are.

So, here’s to the Tigers. You’ll never hear me say this again and I kinda wish this wasn’t published online, so I could take it back but here it is, Go, Tigers! Your team has worked hard and deserves a win, so bring it back home to South Carolina (just don’t post anything awful directed towards the Gamecocks after).

Madison Franz
The Narrative
1116147
Photo by Brooke Cagle on Unsplash

Madison Franz
The Narrative
653647
Photo by Manny Moreno on Unsplash