The best movies for getting into the holiday spirit; did your favorite make the cut? 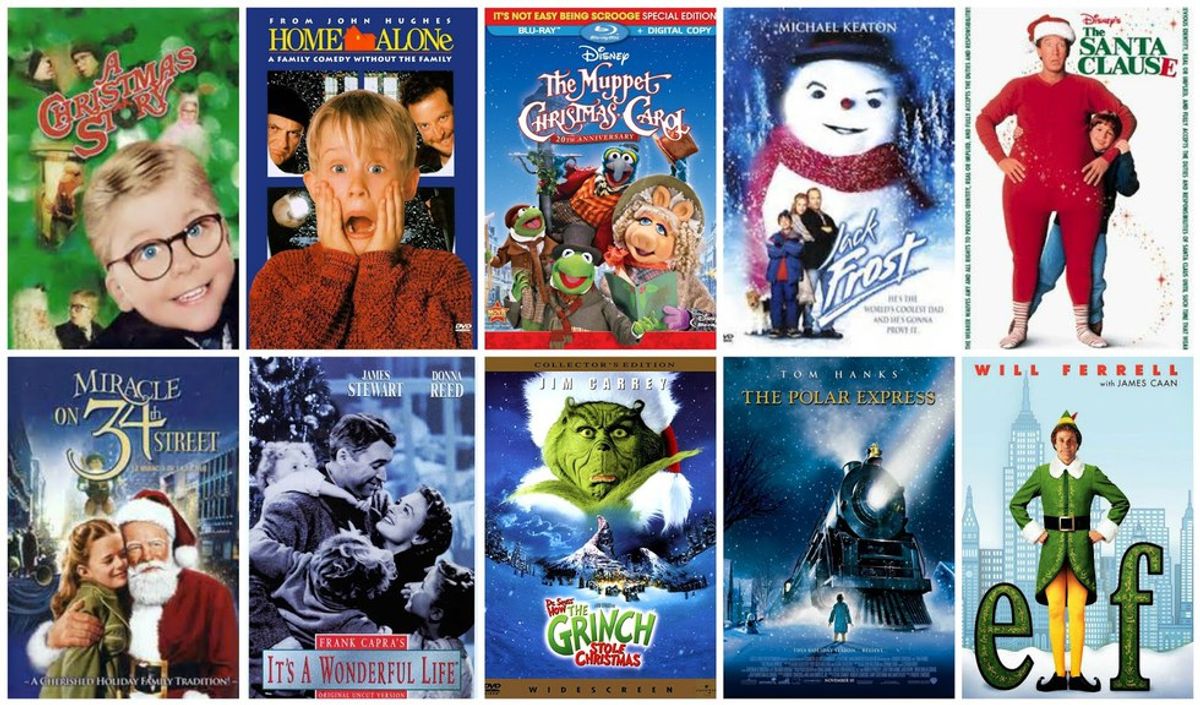 It's that time of year again: when the snow starts to fall, the radio stations switch to 24/7 Christmas music, and homes become ornamented with wreaths and Christmas trees. Decorating these trees seems to mark the true beginning of the holiday season, and it is always a great time to get in the holiday spirit. If you're anything like me, you like to indulge in cinematic cheer while decorating, so as to further the feeling in the air. The following ten films are my favorite movies to watch while decorating the tree and getting into the spirit of Christmas.

We all know that the best way to spread Christmas cheer is singing loud for all to hear, thanks to Buddy the Elf. This movie tells his story as he, a human, raised by elves, travels from the North Pole to a magical land called New York City to meet his biological father. Although he has trouble fitting in with city dwellers, he soon brings something the Big Apple truly needed: Christmas spirit. This movie was released in 2004, starring Will Ferrell.

2. How the Grinch Stole Christmas

No one knows exactly the reason that he hated the whole Christmas season, but the most likely reason was that his heart was two sizes too small! This cinematic adaptation of the Dr. Seuss classic tells the tale of a hairy green hermit who steals all the Christmas presents from the Whos down in Whoville, all disguised as Santa Claus. When he begins to dump the presents off of Mount Krumpit, something miraculous happens to save Christmas. While there was a 2000 live-action version with Jim Carrey, the original cartoon was narrated by Boris Karloff and released as a television special in 1966.

3. Santa Claus is Coming to Town

Have you ever wondered why Santa Claus uses chimneys to deliver presents, or how he developed such a distinct laugh? Maybe you've wondered why he delivers presents at all, or why he sports his characteristic beard. All is revealed in this 1970 stop-motion feature, narrated by Fred Astaire and starring Mickey Rooney as the voice of Kris Kringle. You ought to put one foot in front of the other all the way to the store to pick up this one, and you won't regret it.

Poor Kevin McCallister. On the morning that his extended family left for Paris, young Kevin was accidentally left home alone, as the title suggests. While he initially takes advantage of his independence, he soon must single-handedly protect his house from two burglars, Harry and Marv. Kevin McCallister is portrayed by Macaulay Culkin, who was nominated for a Golden Globe for his performance. This movie was released in 1990 and held the record for highest-grossing live action comedy film of all time until 2011.

Ho, ho, holy crap. Recently divorced father Scott Calvin tries to indulge his son, Charlie, when he puts on the Santa Claus suit of the individual who fell off his roof and disappeared. It is soon revealed that in doing this, he has accepted the position of Santa Claus. Watch as Tim Allen transforms from a flaky businessman to the Father of Christmas (whether he likes it or not) in this 1994 film from Walt Disney Pictures.

You'll shoot your eye out, kid! All Ralphie wanted for Christmas was an official Red-Ryder-carbine action-two-hundred-shot-range-model-air-rifle, but he struggled to find someone else who thought that was a good idea too. This holiday classic will make you feel all types of uncomfortable, complete with a fra-gi-lay leg lamp, a pack of crazed dogs, a football (what's a football?), and a tongue frozen to a pole by the playground. Somehow, though, you can't help but enjoy this 1983 film starring Peter Billingsley as Ralphie.

Some days during the Christmas season you just want to yell "bah humbug!" Well, you may soon be visited by three spirits just like Ebeneezer Scrooge. Although there is a multitude of incarnations of this Charles Dickens tale, they all have the same message: our time here is short, so we must make the most of it!

This feature tells of the adventures of Frosty, a snowman who magically comes to life with the help of a magic silk hat. In an attempt to find a place where he won't melt, he embarks on a journey that crosses paths with Santa Claus himself. You might just feel a little wishy-washy after watching this 1969 CBS television special.

9. It's a Wonderful Life

Every time a bell rings, an angel gets its wings, and George Bailey knows that his guardian angel, Clarence, has surely earned his wings. This classic, directed and produced by Frank Capra, highlights the impact that a single man, Mr. Bailey, has had on his community. Upon George's imminent suicide on Christmas Eve, Clarence intervenes to show him what his community would be like had he never been born. Although it was not the initial success that it was hoped to be, It's A Wonderful Life would be nominated for five Academy Awards and one day would be considered one of the most acclaimed films ever made.

This CBS television special shows a depressed Charlie Brown, despite being the most wonderful time of the year. In an effort to raise his spirits, he directs a Christmas production and is soon reminded of the true meaning of Christmas, thanks to his pal Linus. Airing in 1965, this features the whole cast of Peanuts, as drawn by Charles Schulz.

Although any Christmas movie is a great movie, these encapsulate my favorite parts of the season: the lore, the fun, and the deeper meanings of the season that we can easily neglect. So once you've reflected and decorated your trees, get in bed and cover up your head, because--pretty soon-- Santa Claus is coming to town!