The Day I Learned To Be Ashamed Of My Body
Odyssey

The Day I Learned To Be Ashamed Of My Body 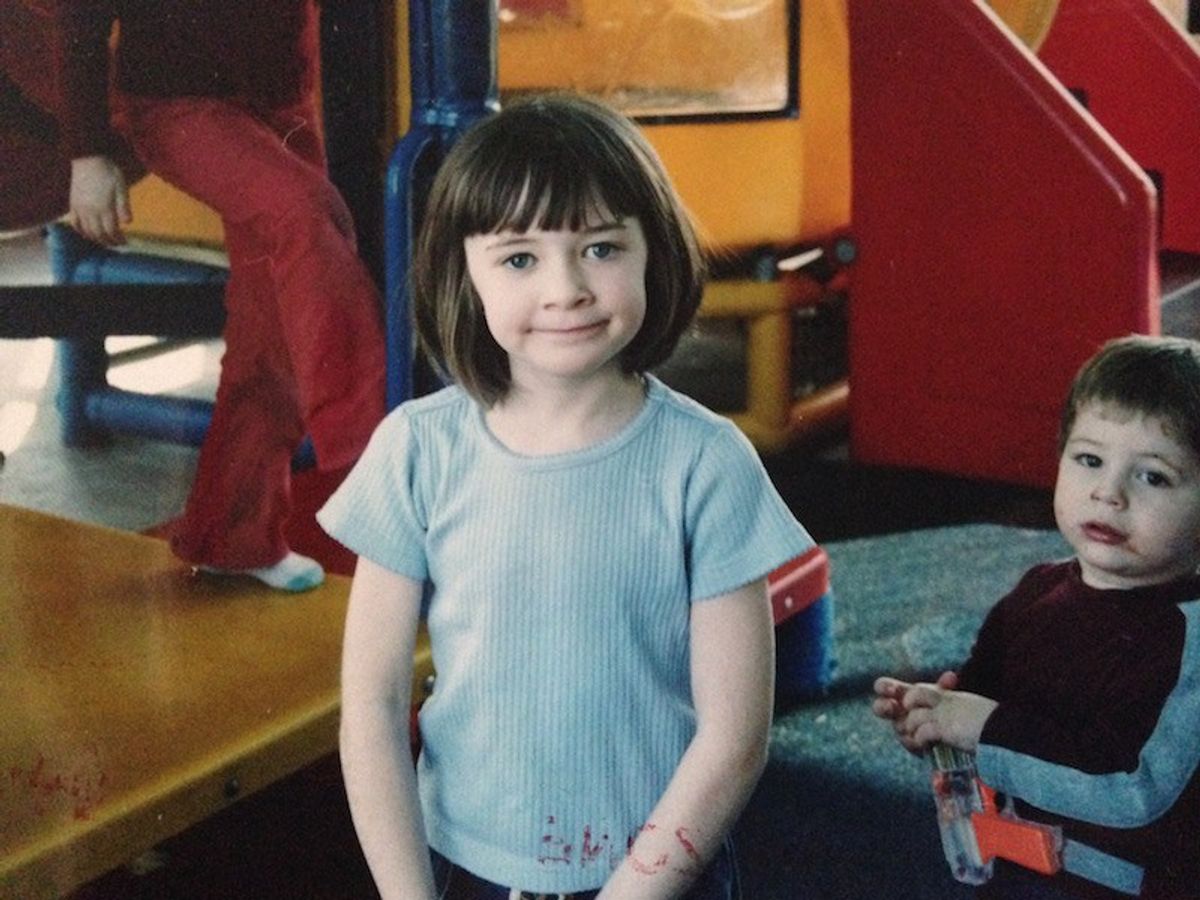 When I was about 10 years old, I spent a weekend at Penn State with my parents for a weekend while my sister attended softball camp. That particular weekend happened to be part of Arts Fest, an annual festival at Penn State with local artists and interactive exhibits for families and students to enjoy. My parents took me downtown to see the art and shop. I was wearing a white Penn State gymnastics shirt and jean shorts with white Sketchers.

I remember walking down the street and seeing a ton of really cool chalk paintings on the ground. I followed the chalk paintings down an ally where a lot of children were playing. Some of the chalk paintings looked so real that it scared me to step near some of them. I remember there was one that looked like the pavement was cracked and you could fall right into a gaping black pit if you stepped on it. There was one that looked like water lilies and I sat next to it for a while because it was so pretty. We kept walking a little and we saw that there was a play place for children with tons of water to cool them off on that scorching hot day. My parents stood aside as I walked through a colorful tunnel of mist, decorated with fake flowers and mirrors inside. Then I took my shoes off to go play on this large platform with red, yellow and blue buckets attached to a pipe system above our heads. It dropped small buckets of water onto the kids’ heads, soaking them and splashing the people who walked by. I had so much fun on that thing, because you never knew when a bucket was about to fall on you and it was so funny and surprising when the one right above you tipped over.

Once I was done playing, I ran to my parents in my bare feet and soaking wet clothing. My mom looked at me, laughed a little, and then quickly looked at my dad and said, “Brian, she’s wearing a white shirt. We need to go get her a new shirt.”

At one point, I asked my mom what was wrong with my shirt. She told me that when white shirts get wet, people could see right through them. This wasn’t a good thing, because then your nipples and belly button would show right through your shirt. That wasn't modest, and people would stare. I told my mom that I saw other girls wearing white shirts, and she explained to me that if I were wearing a bra or something else underneath my shirt, it wouldn’t be as big a deal.

Suddenly I was crossing my arms over my 10-year-old nipples so that nobody could see my body. I remember being so embarrassed that I didn’t wear a bra; I felt like everyone was judging me, and everyone was looking at me. This is the first time I ever remember feeling truly embarrassed and ashamed of my own body. I thought that my body was something that would offend people, and so I bought a new navy blue Penn State shirt and my mom put my old shirt in the car. I never got a new pair of pants. This made me mad because the wet jean shorts were the least comfortable part of my existence this entire time.

Not long after, I heard about wet T-shirt contests on "The Real World," even though I wasn’t allowed to watch that show. Suddenly I felt even more uncomfortable and embarrassed about that day in Penn State. I realized why my mom must have felt embarrassed. I realized why my dad bought me a new shirt. I came to understand (and still understand) their actions that day.

Looking back though, I realize that this is the day I learned to be careful about offending people with my body. I had to be careful about sexualizing my body, even though I didn’t even have a body enough to buy a bra until I was a freshman in high school (late bloomer, what can I say). Not long after that day, in about fourth or fifth grade, I learned to shave my legs because one day during recess, a girl in my class told me that my leg hair was gross. I used Nair the first time, only to find that my sensitive skin broke out in hives when it comes in contact with acidic, chemically based hair removal products. I wore pants for about a week in the beginning of that summer to hide the red bumps.

Not long after I started shaving my legs, I wanted to shave my arms. I thought that if my leg hair was gross, my arm hair must be even worse. Boys and girls alike often told me that my arms were too hairy, so one day I attempted to shave them, too. When my mother informed me that women don’t really shave their arms because it makes their arms prickly, I swore off short sleeve shirts so that nobody could see the hair that grew on my arms. From 6th grade to 8th grade, I actively avoided wearing short sleeve shirts to school if I didn’t have a hoodie with me. I specifically remember one day in 6th grade when I wore a short sleeve shirt, and in English class I wouldn’t write in my notebook because the boy next to me would see my arms on my desk. The next year, in 7th grade, I spilled something on my hoodie and had to wear the short sleeve I wore underneath. That same day, a boy made fun of the girl sitting across from me because she had hairs between her eyebrows and dark arm hair. I was afraid to be ridiculed and so I wore a stained sweatshirt for the rest of the day.

Finally, in 8th grade, I had a friend who took notice to my allegiance to long sleeve shirts. She encouraged me to wear a short sleeve some day, and one day I decided that I would. I wasn’t entirely comfortable that day, but in social studies, where she sat directly in front of me, she sincerely congratulated me and told me that she loved my shirt. It’s something small, but I will never forget that girl, as she’s one of the only girls I remembered in middle school that actively made girls feel good about themselves, rather than feeling as if she was competing with all of them (I was guilty of the latter). Suddenly I was wearing short sleeve shirts without sweaters.

In no way do I blame that day on my parents. In every way, I blame it on society and the things to which we as a society subscribe. I blame it on seemingly normal behaviors passed down through generations but rarely questioned. Sure, this is about #freethenipple. More importantly, this is about freeing young girls to a world in which they need to worry about their bodies just as seldom as young boys. This is about teaching our girls that we’re more than our bodies, our hair, our clothing, our typical gender role as submissive and sexualized.

This isn’t about my parents making me buy a new T-shirt. This is about the judgment they felt they’d face (and probably would have faced) if they didn’t.

Emmaline B
The Narrative
57126
https://unsplash.com/photos/O0T1SIgHAfM