The Cardinals Seahawks Game That Saved The NFL
Odyssey

The Cardinals Seahawks Game That Saved The NFL

This past Sunday Night game will go down in history for keeping our favorite league alive. 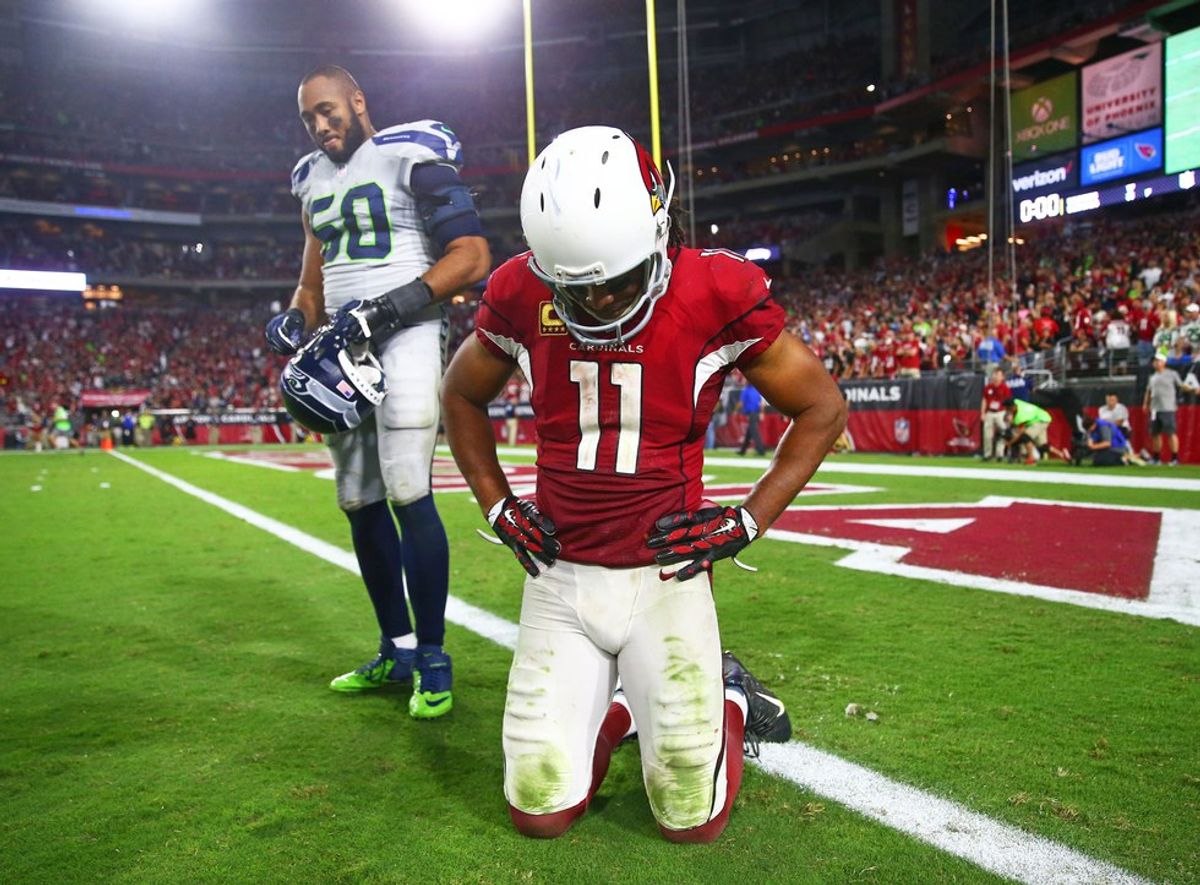 The scene is a dark dusty office. Roger Goodell looks at the ratings report in front of him. Numbers are down. The color rush jerseys aren’t attracting the attention they use to. Guy viewers are going apple picking with their girlfriends instead of waking up early to watch a game take place in London. Goodell looks up at his assistants, he asks one young man who is fresh out of undergrad from Northwestern and wearing faux wood glasses. Goodell ask him who is playing this Sunday night. The young man responds sheepishly, “Arizona is playing Seattle at Home.”

“Thank God, and Palmer is healthy?”

AND BOY DID THEY EVER. That game had everything. Blocked punts, 4th down stands, rivals going at it for division supremacy, and best of all no stinking touch down celebrations because no one scored. It was everything die hard football fans wanted and needed.

There’s been a lot of talk of why ratings are down. Whether it’s presidential debates or an uncommonly exciting baseball playoffs, maybe it’s even the Columbus Bluejackets. It doesn't matter what is causing white males ages 21 to 40 to not watch the NFL, because this Sunday night game saved football in America.

I will tell my kids about how their old man stayed up late one Sunday to watch the game on a sketchy off shore stream website because his school didn’t have a tv option in student rooms his senior year, and had to restart his computer every 5 minutes so viruses didn’t destroy his hard drive and ruin his Independent Study. The struggle our generation endures will not be loss on my kids as they hear about how dad bet the over and watched two high octane offenses combine for 12 points in prime time. Yes, this one will go down in history.

I’ve already responded to all texts from family members asking how my life is going and what my plans are post-graduation with the Pete Carroll GIF after his kicker shanked it so hard it didn’t even hit the net behind the goal post. Yep, this game transcended sport itself. When advertisers say “Football is Family” This is exactly what they meant.

Some will say a tie is un-American. That we should leave the draws to the posh Brits overseas and their fancy scarves and soccer. I say no. A tie is as American as apple pie and mid-90 Chevy trucks. Not convinced? hear me out. When you go to Taco Bell late at night and order an item that isn’t on the value menu and the lady in speaker tells you that they no longer are making that so you settle for two beefy quesaritos, that’s a tie. It might not be what you wanted but you deal with it because you’re a red blooded American and life is hard. A tie is hard it embodies the American spirit.

So when Goodell wakes up early on Sunday to watch the Redskins play the Bengals, he’ll catch some heat for Cincinnati appropriating tigers and eating Skyline Chili, but he’ll persevere because the game itself was saved by the Cardinals and the Seahawks distracting the country from the fact that he is a dictator and suspensions for domestic violence are shorter than celebrating scoring a touchdown. Nope, none of that matters because we got some good GIFs of Bruce Arians and Patrick Peterson. I for one thank God for this game, and I’ll stand a bit taller next week as I watch the games alone in my room when the National Anthem is played, because I believe in this country, this league, and this blessed game more after this Tie.