The Most Terrifying Horror Film Of 2016
Odyssey

The Most Terrifying Horror Film Of 2016

Wake up and realize that the real issue at stake is the fate of our planet. 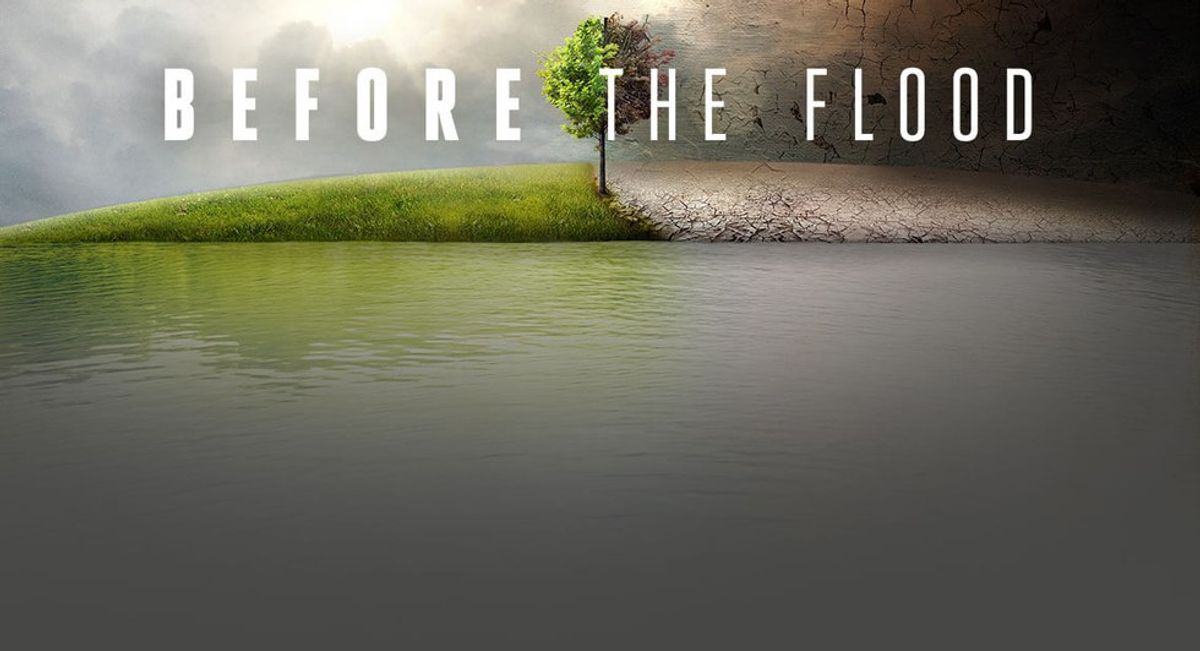 Recently, I watched the most terrifying horror film I’ve ever seen in my 21 years of life. Yes, it was more horrid than the upcoming Trump Presidency, more alarming than the opioid epidemic, and more frightening than global terrorism.

The problem is that the absolutely terrifying effects are not currently an issue at the forefront of our vision.

The effects are only slowly closing in around us like a thick and persistent fog, allowing them to be only temporarily considered, and then tossed aside for another year.

The impending doom is as simple as two little words: climate change. If you’re interested in checking out the horror film, it’s titled Before the Flood. This film is something everyone in the world should see, at least one time. Maybe then, we might begin to understand the implications of where we are headed. (Hint: Towards an existential crisis).

If you’re simply too lazy to watch an hour and a half film, I’ll summarize the points that stood out to me here. The film is produced by Leonardo DiCaprio, who happens to be the UN Ambassador of Peace. Despite a lack of scientific background, DiCaprio readily recognizes and understands the realities of the information he learns and provides throughout the film.

He first travels to Miami Beach, Florida. Keep in mind the state of Florida has actually banned officials from using the phrase climate change. The city has taken on a $400 million project to reduce the flooding of the ocean-bordered streets during high-tide. This flooding would not be occurring if the sea levels were not rising.

Greenland is melting so quickly that the ice is not reflecting sunlight and thus contributing to its own degeneration. In the past five years, the ice has melted 30 feet.

97% of global scientists agree that climate change is real. These individuals make a living out of discovering and presenting real, hard facts. Not fabrication.

One of the most prominent deniers of climate change in the world is James Inhofe. Ever heard of him? He’s a United States senator. It gets better. He is also the head of the Senate Environmental Committee. Oh the irony.

The U.S. is one of the largest consumers of fossil fuels on the planet. At the same time, billions of people are living without electricity. Right now, they would give anything for coal and oil. We need to set a different example, so that they would rather have solar and wind.

Fossil fuels aren’t the only contributors to the warming of our planet. In the United States alone, 47% of the land is used for food production. A large portion of this land is used for raising cattle, as well as supporting the feed for the cattle. When cows chew, they release methane into the atmosphere. Why is this a problem? One molecule of methane is equivalent to 23 molecules of CO2, and cows eat everyday, all day. There are approximately 1.3-1.5 billion cows in the world.

If we produced the same type of energy that Tesla uses in their cars, 100 of these "gigafactories" could power the entire planet.

So, what exactly is keeping us from making a change? Politics. Money. Greed. Oil and gas companies have some of the largest industrial monopolies in the world. Remember James Inhofe? Most of his campaign funding comes from the oil sector. Have you connected the dots yet?

Profits from fossil fuels aren’t the only thing keeping the industry running. Consumers contribute money to environmental destruction every single day. That delicious steak you just ate. The bag of Doritos you just opened.

Yes, I said Doritos—Frito-Lay uses palm oil in its products. Palm oil is largely produced in Indonesia, where thousands of acres of forest are destroyed in order to make room for growing these trees. Deforestation such as this releases large concentrations of CO2 into the atmosphere.

On the trajectory we are headed with rising temperatures, sooner rather than later warm climate locations will become uninhabitable, crops will not grow, and you will be able to “sail through the North Pole.”

After reading this, my hope is that you are feeling a little overwhelmed. I know after watching this film, I was incredibly saddened, disheartened, and effectively terrified.

There is hope, however. You can make minute lifestyle changes; consume less red meat and more chicken, avoid processed goods containing palm oil, and turn off the lights when you leave the room. Vote for and elect government officials who care about this issue. The small adjustments you can make are endless. We just have to think about it. Thinking about it is easier now more than ever, because you can walk outside to 60-degree Ohio temperatures in the middle of January. You have to know. Something is wrong with that. Do not rejoice in it. Let it motivate you to make a change.

Someday, we are all going to die. We may very well die from global warming. Imagine dying in 20 years. Imagine dying tomorrow. Leave this world by making one small impact for the future of our planet. It doesn't matter how far away the impending doom is. We have to make change now. As DiCaprio puts it, “You will either be lauded by future generations, or vilified by them.”

Imagine the shame. I’m terrified of it.

Whether you believe me or not, please, please consider watching the film.