Why I'm against vegans like Freelee the Banana Girl. 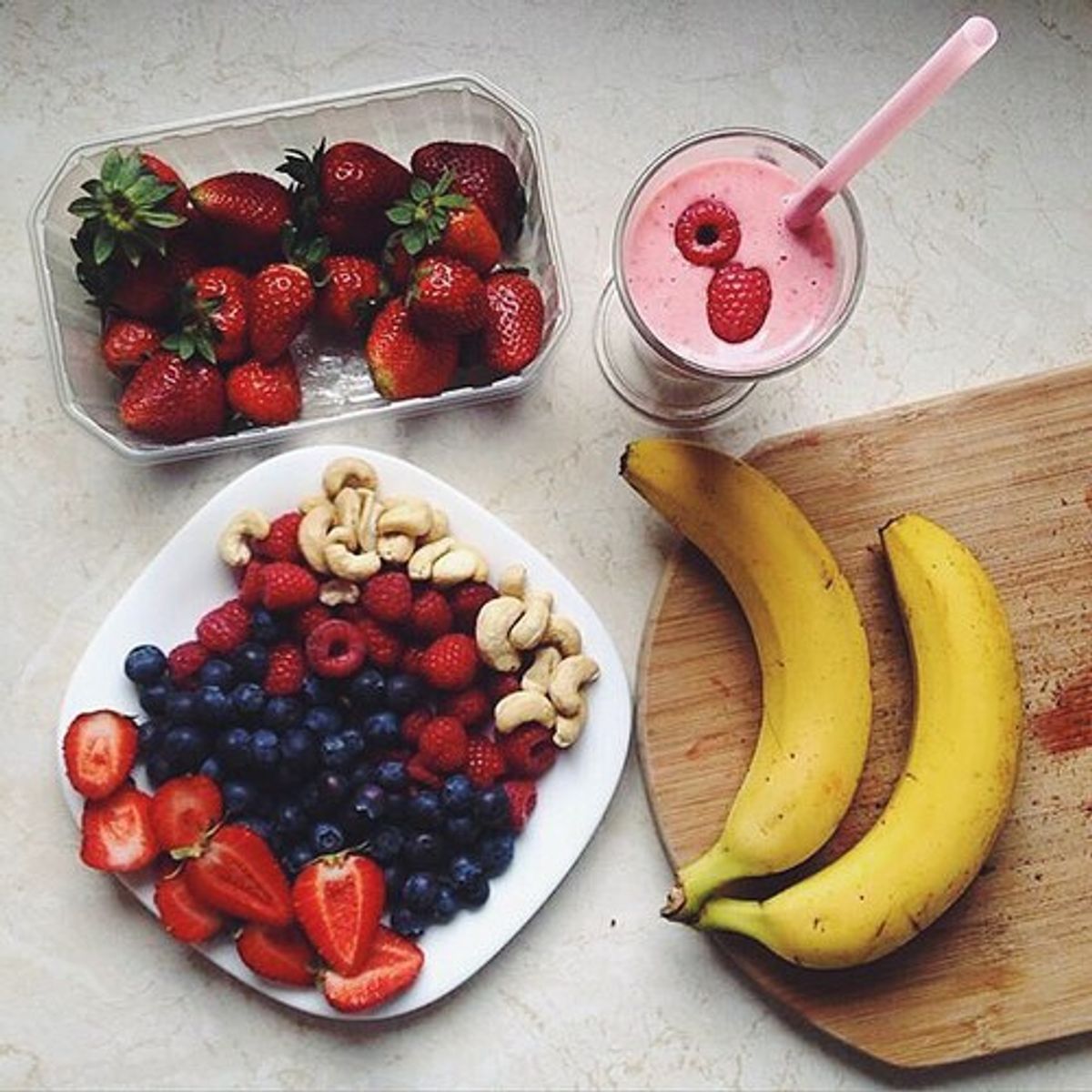 As an avid YouTube watcher, I can't help but notice a trend. A ton of my favorite YouTubers have turned vegan. Most recently, Tana Mongeau converted to the popular plant-based lifestyle.

Mongeau is known for her insane "Story Time" videos that range from vulgar, raunchy topics that will most likely have you laughing out loud. She curses a lot, she's comical, and her videos have a natural trademarked tone that can only make you hit subscribe.


But Mongeau has touched on her eating habits and exercise lifestyle in the past. In one of her videos, she talked about how to stop bored eating and how to stay fit. Now with her recent announcement of going vegan, drama has broken out.

Meet Freelee the Banana Girl. With more than 700,000 subscribers, Freelee posts videos about the vegan lifestyle. Just like her channel suggests, she's an avid eater of bananas and actually promotes eating mono meals (one of the same type of fruit for an entire meal). She is also a competitive biker and eats at least 2,000 calories from fruit alone a day. Her book, "Rawtill4 Diet," showcases recipe after recipe about the raw vegan lifestyle and about carbing up.

Freelee promotes veganism on a health level and ethical level. But it goes one too far. If you browse through her videos, it is obvious that while Freelee is promoting a great thing like veganism, her videos lack anything positive or great.

Freelee bullied Mongeau prior to her becoming vegan and continues to bully YouTubers like Niomi Smart, Nicole Arbour, Ingrid Nielson, and Blogilates.

If you've never heard of Freelee before or are not involved with any form of the food community on YouTube, this can be hard to understand. But, as a viewer of hundreds of YouTube videos a day and a supporter of veganism, I am frankly disgusted with the vegan method that YouTubers, like Freelee, have adapted.

Mongeau fought back and challenged Freelee to not post a negative video during a certain time period; the vegan community on YouTube exploded with dramatics from all sides and corners of the interwebs.

But Freelee isn't the only one using bullying tactics and straight fear to corner YouTubers with big fanbases to support her and her lifestyle.

Other YouTubers like Sorsha post similarly styled videos to Freelee. This trend is only expanding, even into the comments on videos of non-vegan food YouTubers.


I don't think people should attack others for being different. Further, eating is a personal thing. An individual has complete control over what they put in their body. If they decide to eat McDonald's every day and McDonald's is a franchise that is open and continuing to serve food, let them decide. While it may be a poor choice you maybe wouldn't make, it's not up to someone else to control such a personal, intimate thing. Shoving opinions down someone's throat is bad enough, but shoving food even further is worse.

Yes, veganism is great. There are health benefits, environmental benefits, and ethical benefits.

“The global livestock industry produces more greenhouse gas emissions than all cars, planes, trains and ships combined, but a worldwide survey by Ipsos MORI in the report finds twice as many people think transport is the bigger contributor to global warming,” an article in the Guardian reads.

"According to one study, 'vegetarian and vegan diets are effective in treating and preventing several chronic diseases.' The adaptation of a low-fat vegan diet can substantially mitigate the impacts of type 2 diabetes, rheumatoid arthritis, and Parkinson's disease. Veganism reduces the risk of colon cancer. Vegans have a better 'antioxidant status' than non-vegans. Veganism is more effective at combating obesity than other prescribed diets, such as that promoted by the National Cholesterol Education Program. Veganism has been shown to lower risk factors associated with cardiac disease. As Dr. Michael Greger, director of public health for the Humane Society of the United States, explains, 'A plant-based diet is like a one-stop shop against chronic diseases,'" an article in the Atlantic states.


Through multiple studies done in the health community, it is shown that veganism is a lifestyle to lead if you want to avoid diseases and health issues, at any age.

However, people are allowed to eat meat or indulge in animal products, because that's the freedom of choice. A freedom of choice that's personal and not up for discussion, even by a well-grounded, famous YouTuber.

Shaming people into eating vegan is not the way. Even though I don't agree with influencing other people to eat a certain way just because it's what you do, I think if vegans do want to spread their message, it should be correlated to a positive one, an understandable one.

And let's not act like everyone eats meat or animal products because they love them, it's because it's easy, it's embedded into society, it's cheap, it fits their lifestyle.

It's a shame because Freelee has a great message. Why wouldn't you want to influence the planet, society, and your body in a great way, with one single action? But isn't it diminishing that positive message with leaving a bitter taste of insults and clickbait video titles of people's favorite YouTubers?

I know that the opposing side, people who support Freelee and YouTubers alike, are going to say, "But when you pick it apart, eating animal products is wrong." Yes, it's absolutely horrible that cows are slaughtered and there are still a million question marks over the humanity in all of it. But the hard answer is that this doesn't matter for some people, and even if it does, it's not an accessible or realistic concern.

Eating vegan and living a vegan lifestyle is not just costly in terms of what money leaves your wallet at the register at Whole Foods; it's costly in the time and overall energy spent on food.

Freelee and vegans on Youtube, even those who create positive, great videos, are on YouTube because it's more or less their job. While Freelee does do other things and every YouTuber has a different story, whether it be a million side jobs or pursuing an education, the videos and the lifestyles they paint and represent are those of an exclusive subset.

Is it possible for the woman sitting beside me on the uptown N train this morning, herding three small children off the 42nd Street stop, to eat vegan? Is it possible for the person who's working 20+ days to worry about if the cheese on their pizza is made from almond milk or dairy milk? Or what about the college student, rattling empty coat pockets for pennies to pay for her next meal? Or what about the person who simply likes cream cheese on his everything bagel and has no desire to change?

Is veganism possible, realistic, and accessible for everyone?

According to a Huffington Post article, "Forget Saving The Planet: Being a Vegetarian Is Cheaper Than Eating Meat," more studies show that eating at least semi-plant based won't break the bank.

"According to the research, by eating a plant-based diet that uses olive oil—instead of lean animal protein—as a healthy source of fat, you could save nearly $750 a year compared with the average cost of a 2,000-calorie diet that follows the federal MyPlate nutrition guidelines. Not only was the meatless diet cheaper than eating meat, but it provided more of the fruits, vegetables, and whole grains that are generally considered to be integral to a healthy diet."


However, the fact still remains that the average American is more likely to be a meat-eater rather than a vegan.

Instead of attacking people who eat the same way people have generally eaten since modern times, maybe focus on why veganism isn't the norm and how to make it easy for everyone, like the YouTubers below:

Food is personal. Schedules are personal. And above all, whether you agree with veganism or not, I think everyone should be allowed to have that personal decision secured for just themselves and their forks.


You are what you eat. You aren't what other people eat and vice versa. Eat 32 bananas a day or eat a slab of red meat for dinner. It's up to you. And whether your neighbor is munching on American cheese or unsalted almonds, it doesn't affect whatever is on your table for your next meal.