Rushing the Field in College Football - A Privilege, Not a Right
Odyssey
CurrentlySwoonLifestyleHealth & WellnessStudent LifeContent InspirationEntertainmentPolitics and ActivismSportsAdulting
About usAdvertiseTermsPrivacyDMCAContact us
® 2023 ODYSSEY
Welcome back
Sign in to comment to your favorite stories, participate in your community and interact with your friends
or
LOG IN WITH FACEBOOK
No account? Create one
Start writing a post
Sports

What's the deal with everyone wanting to rush the field after every semi-important college football win? 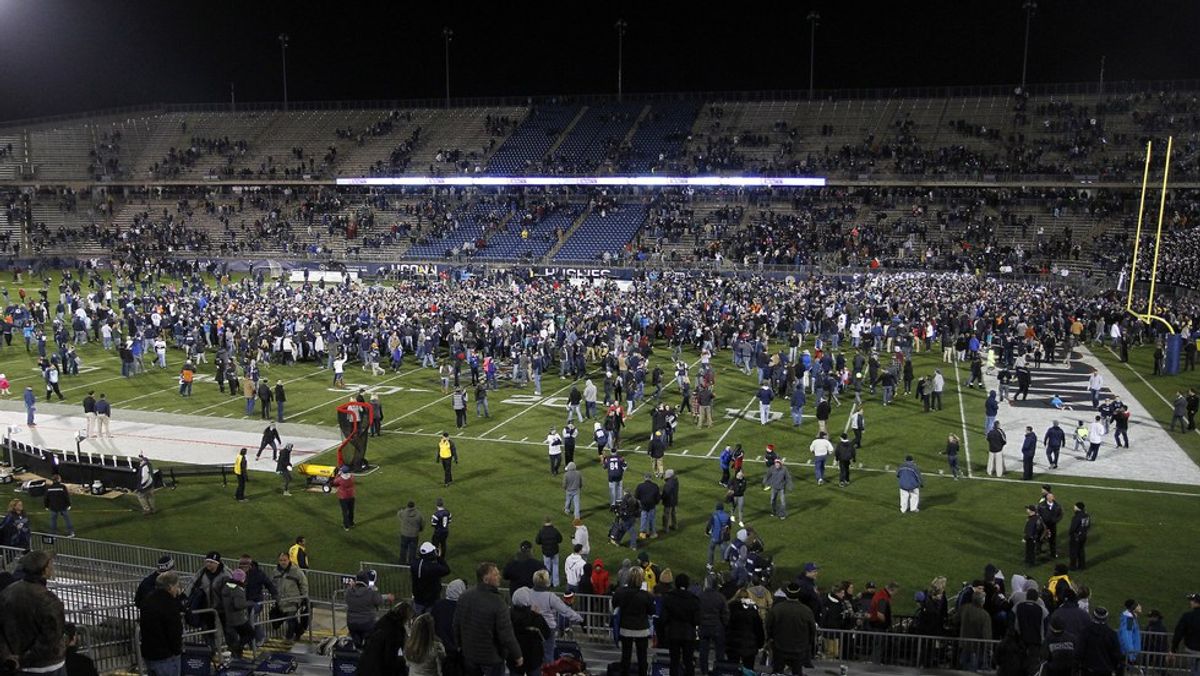 If you're a fan of college football, you know some of the great traditions of the sport. From the flaming spear at Florida State games, to the cowbells at Davis-Wade Stadium, college football provides a unique atmosphere that integrates traditions and fandom so much stronger than any other sport.

For many years, rushing the field was one of those traditions, and one that was reserved for the most exciting of occasions. In times past, you didn't just rush the field for the sake of creating a mob, or trying to be cool. You did it because your team pulled an upset, a BIG upset, and you needed to show the world how excited you were for your team. And in those days, those moments were fantastic.

Today, however, it appears rushing the field (or the court in college basketball) has become a right of passage for many college students. In an age where social media is king, students seem to almost be encouraged to rush the field. Why? Because rushing the field means instant fame (even if only brief) on social media.

I used to be a fan of rushing the field. I remember back in the late 2000s when Rutgers was on a meteoric rise to prominence and defeated Louisville, ranked in the top five at the time. The students rushed the field in Piscataway after the game, as they should have. Rutgers had limped through years of losing records, and was now finally being recognized on a national scale for its football team.

Fast forward a few years, and now rushing the field seems unbearable to me. Again, going back to Rutgers, they have shown an example of when not to rush the field. In Brady Hoke's final year of coaching the Michigan Wolverines before Jim Harbaugh came aboard to right the ship, the maize and blue would drop a game at Rutgers. This would be the first Big Ten win for the Scarlet Knights, and the students decided to celebrate by...you guessed it, rushing the field.

I get why they did it. Rutgers had just won their first game in a power conference, which was important. However, do you really rush the field when you beat a 2-4 team? That just seems pointless to me. Almost as pointless in fact as when Kansas fans ran onto the field after defeating North Dakota State...an FCS team.

So to all the college football fanatics out there, remember what rushing the field truly is about. Many fans are tired of watching you all flock onto the field after a run of the mill win, and long to get back to the days of exciting wins that are celebrated appropriately.

Nicole Marie Nigro
Individual Creator
6509
c1.staticflickr.com
Where to start...... Let me start with the cliche that life throws us curveballs and what we do with it is what counts.