The Pros And Cons Of Tumblr
Odyssey

The Pros And Cons Of Tumblr

'You should make a pros and cons list. That always works for me.' -- Leslie Knope 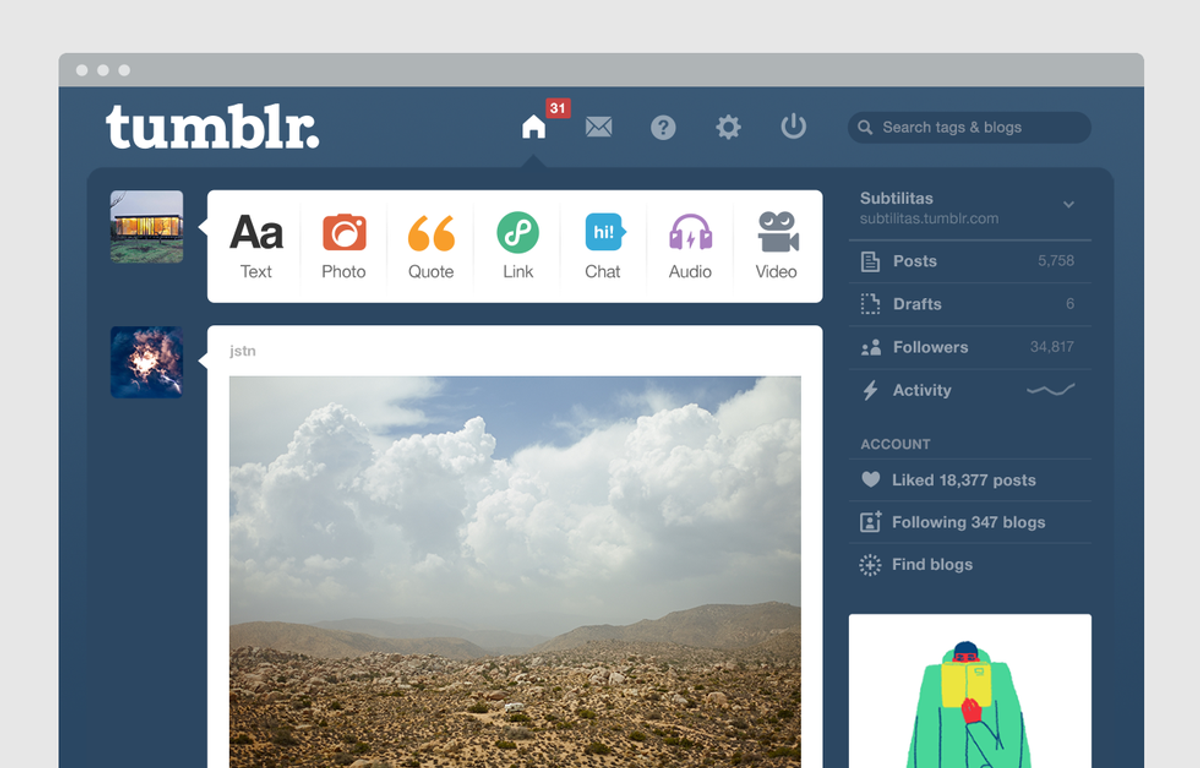 Since its creation in early 2007, Tumblr has transformed into a worldwide Internet phenomenon. As of 2016, there are 555 million users registered for the blogging website. It basically has its own culture at this point. But the website seems to fall under extremes; some people hate it while others don't go a day without it. Here are some of Tumblr's best and worst features:

1. You can find all interests on the site. There are blogs dedicated to everything from TV characters to flowers, to food to sh*t-posts. It's like an incredible virtual jungle. You can use tags or suggested blogs to find stuff you're interested in following; the more you follow, the more posts will show up on your dashboard.

2. Tons of memes and jokes and text posts become popular through Tumblr, to the point where there are many Facebook pages and Instagram accounts that are dedicated to posts made on Tumblr. It's pretty common for a Tumblr user to think "Yeah I already saw that on Tumblr a month ago" when someone shows them a meme.

3. It's not exactly social media, so you don't have to add people you don't want to. You were always warned about strangers on the Internet, but sometimes they're just cooler than those Facebook "friends". You can peruse through blogs without it being weird if you hit the follow button.

4. People actually have serious discussions on it. World events, issues of racism and sexism and intersectionality, opinions on politicians, it's all there. And a lot of the time, the dialogue is great! These posts can highlight different perspectives from all over the world.

5. You can have multiple blogs if you want. When you register, you start with one but can add more if you want to focus on specific posts. Many people have a personal blog (where they reblog whatever they want) and side blogs that focus on one thing in particular (like photography, books, fandoms, etc).

1. If you think arguments via Youtube comments are bad, Tumblr is worse. So much worse. It's a blogging platform so people can write what they want, and anyone who sees it can respond to it.

2. Misinformation can spread really easily, especially because each reblog is a separate thread. Unlike Reddit, you can't see all the chains that one post branches out to, so sometimes you'll see an original post with one series of responses but then see the original post again with a different series of responses. While it doesn't mean everything you see is a lie, it means absorbing what seems like factual information with a grain of salt (or a good Google search).

3. Sometimes people repost instead of reblogging. This means that, rather than reblogging the original post with the original caption, they'll copy/paste or download the post onto their computer and make it into a new post. Many artists get their work stolen or republished without due credit because of this. While Tumblr is great for showcasing art, this possibility makes people hesitate to share.

4. Anonymous asks. This feature can sometimes be abused, especially by people who have a large number of followers or tend to their own work/opinions. It can even lead to cyber-bullying. You do have the option to turn this feature off, so if you start to receive anonymous messages that you don't like, you don't have to respond or read them.

5. The mobile app is horrible. Don't even bother unless you like emotional pain.