Proof That Donald Trump Has Insulted Every Demographic Except For White Men
Odyssey
CurrentlySwoonLifestyleHealth & WellnessStudent LifeContent InspirationEntertainmentPolitics and ActivismSportsAdulting
About usAdvertiseTermsPrivacyDMCAContact us
® 2023 ODYSSEY
Welcome back
Sign in to comment to your favorite stories, participate in your community and interact with your friends
or
LOG IN WITH FACEBOOK
No account? Create one
Start writing a post
Politics

Would you trust this man with our nuclear codes? 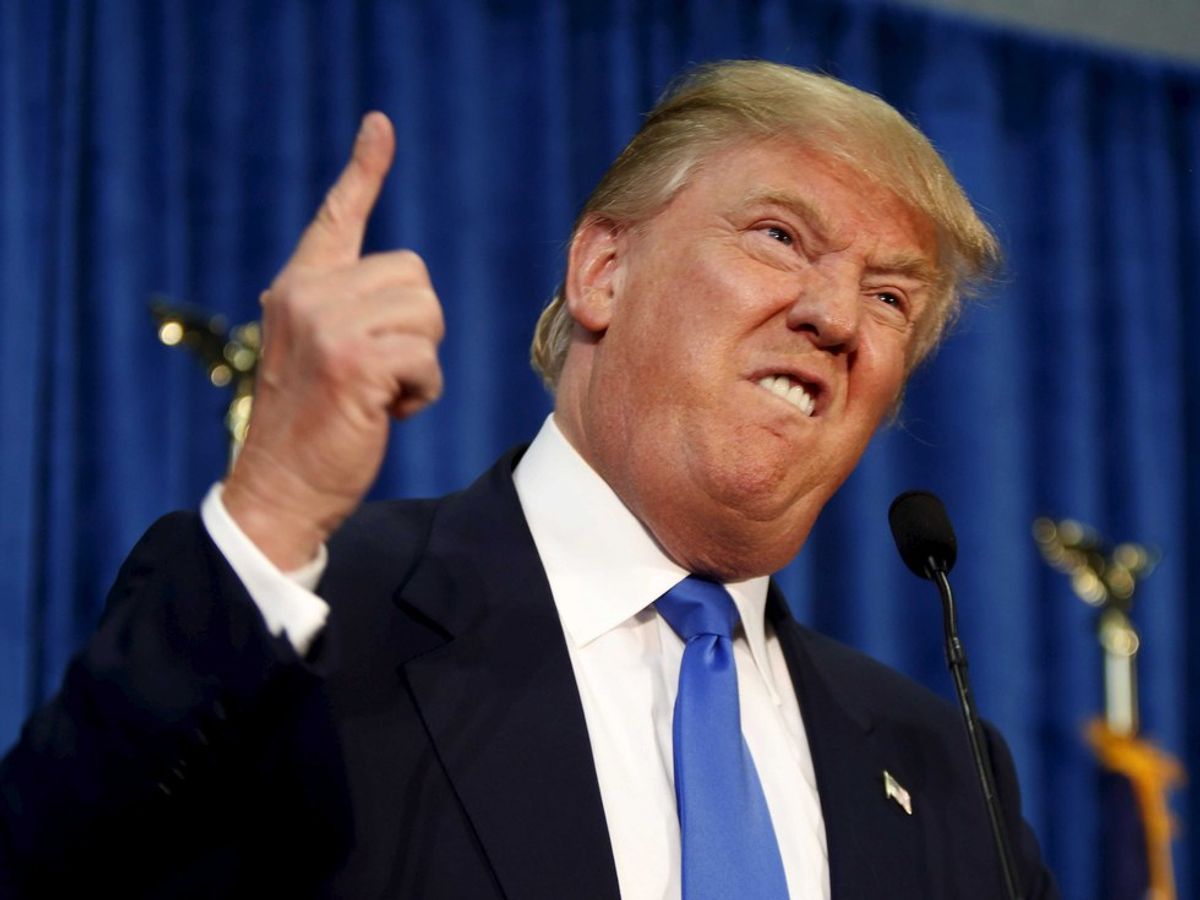 Ahh yes, the U.S. election, or basically, the only time once every four years that people actually give a damn about politics. The US election is greatly followed in the US and around the world, and even more so this year, with the Republican candidate being an arrogant orange baboon that can't seem to shut up. It feels like I can't go one day of living my life without Donal Trump saying something offensive, rude and untrue. Some days his victims are Muslims, others it's women, and if we're lucky he'll just say something untrue about US policy (like the Iran deal). Over the past couple of decades, the Republican party has had some problems with diversity, and being more accepting of women, people of color, and people of different socioeconomic levels. I'm sure there are people that are working to change this, but their nomination of a misogynistic, racist pig digs them further into this hole. So let's take a look at some of the insulting things Donald Trump has said to basically every demographic group except for white men.

We all know Donald as a less than stellar opinion on half the American population. And this isn't on just one front, but has spanned over many areas of what it means to be a woman. From telling women that they would "look good on their knees" to wanting to date his daughter, and of course, let's not forget that he would want his daughter to find another job if she were sexually assaulted at work instead of wanting her to fight and make sure that her assaulter reaped the consequences. There's also threatening Ted Cruz's wife on Twitter, and implying that the only reason why Hillary Clinton is gaining so much support is because she's a woman. Speaking of Hillary Clinton, Mr. Trump also feels like her husband's infidelity is her responsibility, and her "inability to satisfy her husband" means that she'll be a bad president.

For a wonderful, compiled list of 18 other things that our dear Donald has said about women look no further than this article on Huffington Post.

Donald Trump's racist attitudes towards African Americans are decades, yes DECADES old. In 1973 he was sued because his family company was screening people based on race, and weren't letting apartments to Black people. In 1991 he was quoted saying "Laziness is a in blacks" to of course something more recent like implying that President Obama wasn't academically qualified to get into Columbia and Harvard Law and got in because of his ethnic background. Let's not forget that he accepted the beating of a Black Lives Matter protester, and it actually took him ONE DAY after an interview with CNN's Jake Tapper to issue a statement after his interview saying that he does not like former KKK grand wizard David Duke endorsing him. Everything from this section was taken from this link.

Think anti-semitism is a thing of the past?? Well look no further than Donald Trump to disprove this point. In a meeting with Republican Jews in December, he told the audience "you're not going to support me because I don't want your money". There's also his failure to immediately disavow the KKK (which is also very anti-semitic) and of course the numerous times that he has retweeted messages from anti-semitic blogs, and encouraged or not said anything to his supporters saying anti-semitic things. We have to remember that being a bystander is also part of the problem here people. There's also the stereotyping of Jews as good negotiators and political masterminds.

His thoughts on Mexicans are obviously the most well known. To saying things like Mexico is only sending us their drugs, crime and rapists to posting a photo with a taco bowl on Cinco De Mayo (a Mexican holiday) with the caption, "I love Hispanics!" it's no secret that our good 'ol Trump doesn't have the best opinion on Latinos. Let's not forget another victim of his abuse: former Presidential candidate's wife Columba Bush by tweeting (and then later deleting) "Jeb Bush has to like the Mexican Illegals because of his wife". He also insulted Jeb Bush and many other Latinos months later by claiming that Jeb Bush spoke "Mexican". By that standard if Jeb Bush speaks "Mexican" then you speak "Paedophile". Continuing on with the common theme, he also supported the beating of a Hispanic man by 2 of his supporters, calling them "passionate".

5. Our favorite friend's thoughts on Muslims:

Ahh yes, I'm sure then entire world knows about Mr. Trump's thoughts on Muslims. From proposing a "complete shutdown" of Muslims entering the United States, to stating that Ghazala Khan's reason for not speaking at the DNC was because she wasn't allowed to due to her faith, we know that Trump has the least favorable opinions on Muslim Americans. There's also the ban on Sadiq Khan (the mayor of London) from entering the US, and his statements saying that "Islam hates us", implying that every Muslim is out to get the United States. To really get a sense of the hatred Donald is stirring up amongst his followers, I suggest reading Aziz Ansari's fabulous essay.

6. Our Republican Orangutan's thoughts on Asians:

Asians have actually been the least talked about demographic group in this election (not that I'm complaining). While Trump has obviously insulted Muslims, mainly of whom are of South Asian origin, he has also insulted Chinese people very briefly, mocking their English. But the main thing that insults Asian Americans the most is Trump's stance on immigration. When 75% of the Asian American adult population emigrated from Asia, it's no surprise that immigration is something that matters to Asian American voters.

There are some demographic groups that I might not have elaborated on but he has still clearly insulted. Like called Elizabeth Warren "Pocahontas" due to her Native American heritage, and making fun of a reporter with mental disabilities. As we countdown to election day, I only hope that the people of this nation open their eyes and see this man for who he really is: a bigot, racist, and someone that is clearly unfit to rule our country.