"I have really bad PMS too!" 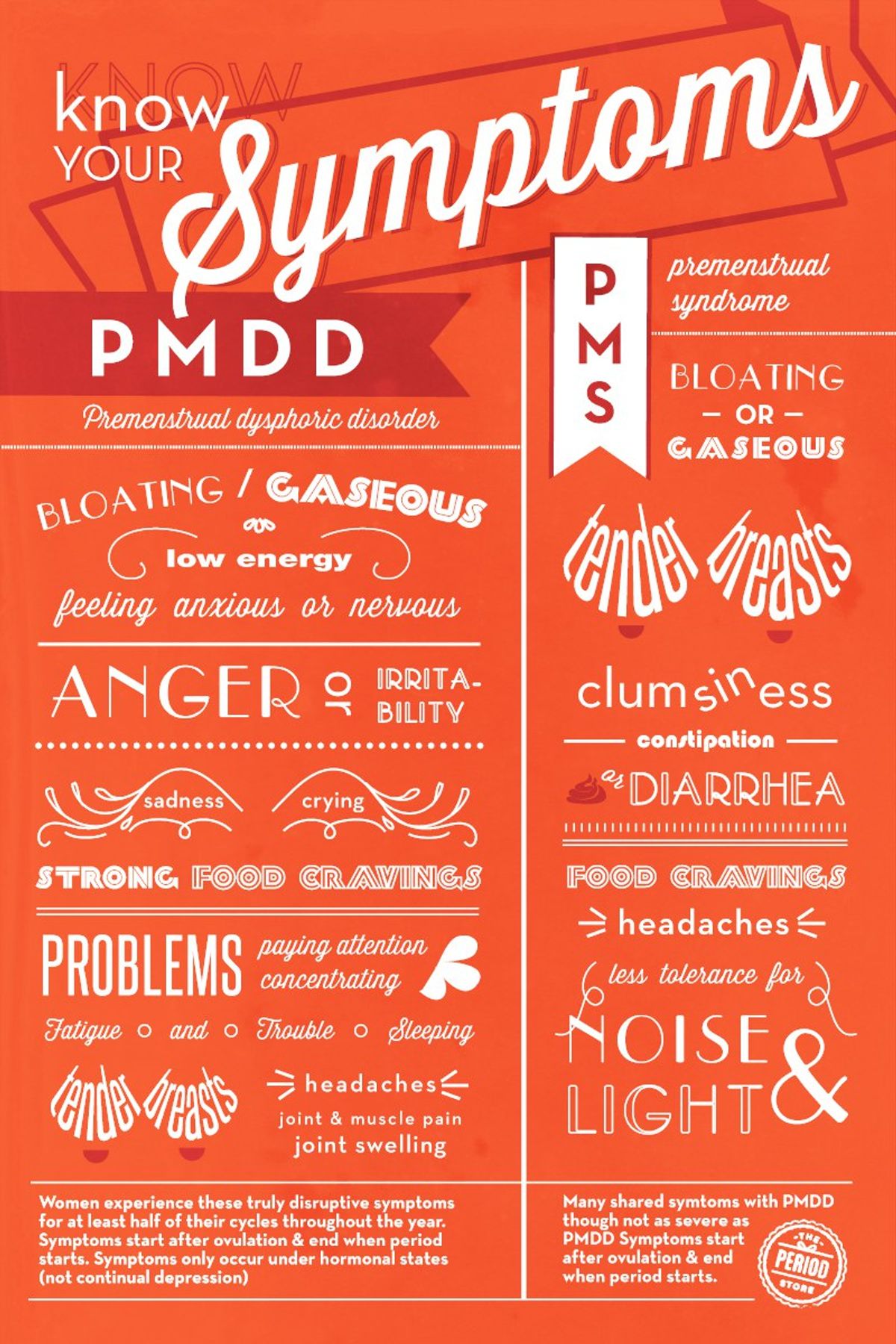 PMDD is for more than half your month. So that makes half your life in a constant stage of anxiety, depression and extreme mood swings, along with the classic PMS symptoms. It usually begins once you begin ovulating, that's when the real horror starts.

The irritability is the worst for me, personally. I've lost relationships over my irritability. My PMDD got so bad that my ex-boyfriend couldn't be with me anymore. I would go from completely normal to extreme screaming and crying and throwing punches.

Next to the irritability comes the mood swings, which are somewhat like the irritability. I could go from angry, to happy, to sad all within an hour. It's uncontrollable, you never know when it's going to change.

Then finally, when your period comes its like a whole new world opens. You're suddenly cured! Until two weeks later when you go through the exact same thing. It's a tiring, debilitating disorder, that's a never ending cycle.

PMDD is classified as a mood disorder in the DSM-V. You can see it there along with bipolar disorder and depression. Sometimes I think and I believe it's weird that I personally have something that's classified as a mood disorder, but it makes sense. A lot of people with this disorder are often misdiagnosed originally with bipolar disorder, because a lot of doctors don't really realize that this disorder exists.

If you search PMDD, it will either come up that it is very common, or very uncommon. The statistics are unknown because a lot of people don't realize this illness exists, because like I said, many people are misdiagnosed with bipolar disorder.

I was diagnosed when I was fourteen. My PMDD personally ruined a lot of my high school years, and there's a lot you can do for PMDD, but my parents didn't think it was as debilitating as it was.

Commonly, this disorder is treated using birth control (which is what I'm being treated with). This is an effective way of controlling someone's hormonal imbalance. You can also be treated using an antidepressant, commonly, Zoloft. I have also used that method of treatment and have figured it works okay, but not nearly as well as birth control.

PMDD is out there, and there are many everyday people battling this horrible illness. It's not "just PMS" and it's not just "moodiness". It is an extreme disorder that should be talked about more.