Osweiler in, Griffin out for the Cleveland Browns
Odyssey

Osweiler in, Griffin out for the Cleveland Browns

Robert Griffin III struggles to stay with a team 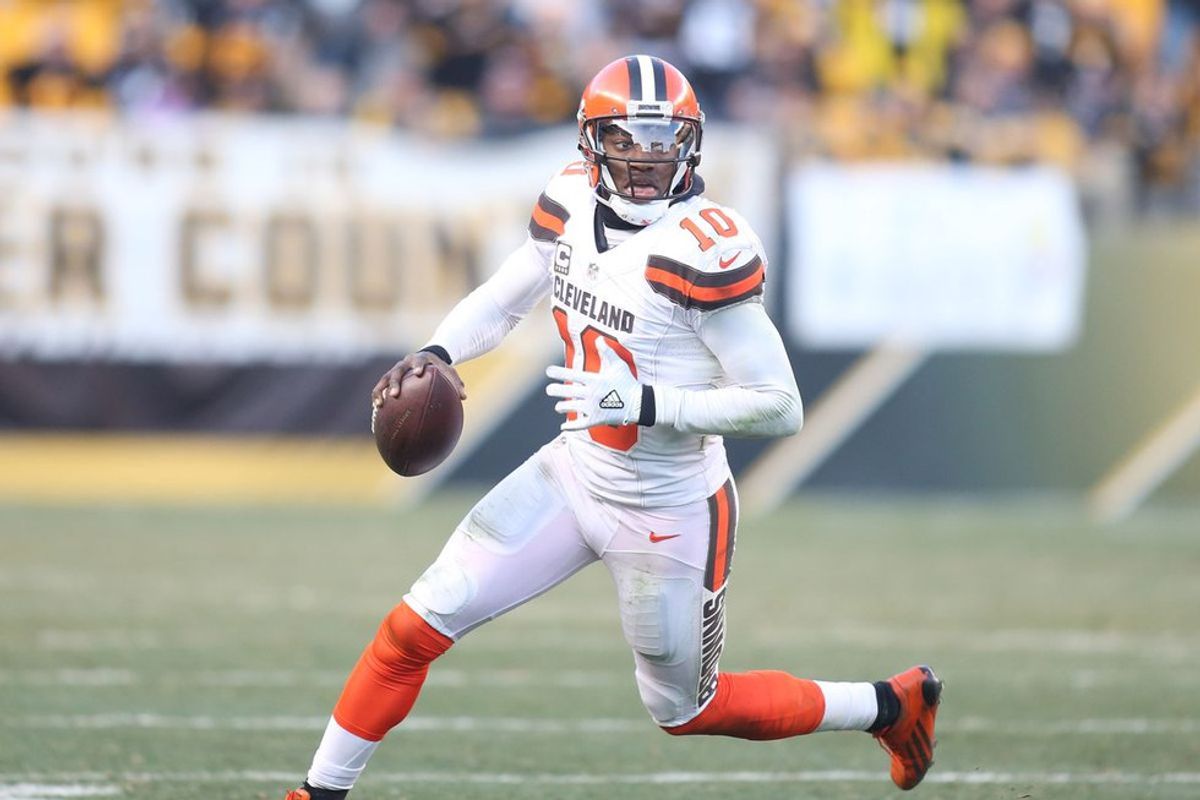 It was a Sunday afternoon in Philadelphia, where the Cleveland Browns and the Philadelphia Eagles were set to play on the gridiron for the first game of the season. Griffin was making his debut as the Browns quarterback, after being released from the Washington Redskins.

With 3 minutes and 41 seconds left on the clock, down 22-10 and desperate to make something happen, Griffin did what he does best. With the ball his hands, Griffin started running to gain yardage. Rushing from the Browns’ end zone, Griffin slanted towards the sidelines where Eagles cornerback Jalen Mills meet Griffin on the same sideline. Mills tacked the quarterback after bouncing off the Browns tight end Gary Barnidge.

The collision between Griffin and Mills left Griffin with a shoulder injury, where it was later announced that he suffered a broken coracoid process in his left collarbone. He was benched for 11 games.

Griffin played in the last four games of the season, but acknowledged he wasn’t fully healed from his injury.

But little did Robert Griffin III know that he would play his last four games as a Cleveland Brown after his injury.

RGIII will be released by the Cleveland Browns and will become a free agent once again, according to a source that spoke to ESPN. The decision to release Griffin comes after the Browns made a trade with the Houston Texans to obtain quarterback Brock Osweiler.

Since Griffin has been in the league, he has been released by two teams.

The second round overall draft pick was first released from the Washington Redskins after the 2015 season, when he tore his ACL in the wild-card round of the playoffs.

He was the Redskins quarterback for four years while leading the Redskins to the playoffs as a rookie, but lost his starting position to Kirk Cousins and didn’t play in 2015.

During his time with the Browns, Griffin has played five games and completed 87 of 147 of his passes for 886 yards. He has had two touchdowns, three interceptions and a quarterback rating of 72.5. Griffin likewise led the offense on a Christmas Eve game, to grab the Browns only win of the season.

The former Heisman trophy winner and NFL AP Offensive Rookie of the Year as thrown for 8,983 yards as an NFL quarterback, resulting in 42 touchdowns and 26 interceptions.

However, his only downfall is being able to stay healthy during a season and landing on a team who is willing to help build him back up again from his rookie year.

With many of the surprising trades and releases happening in the NFL, Griffin might have some difficulty trying to find his next home. Nevertheless, it will be interesting to see where in ends up in 2017.

Emma Hyatt
3750
The Truth About My Parents' Divorce