Once A Runner, Always A Runner
Odyssey

Once A Runner, Always A Runner

Running isn't just a hobby; for me, it's a way of life. 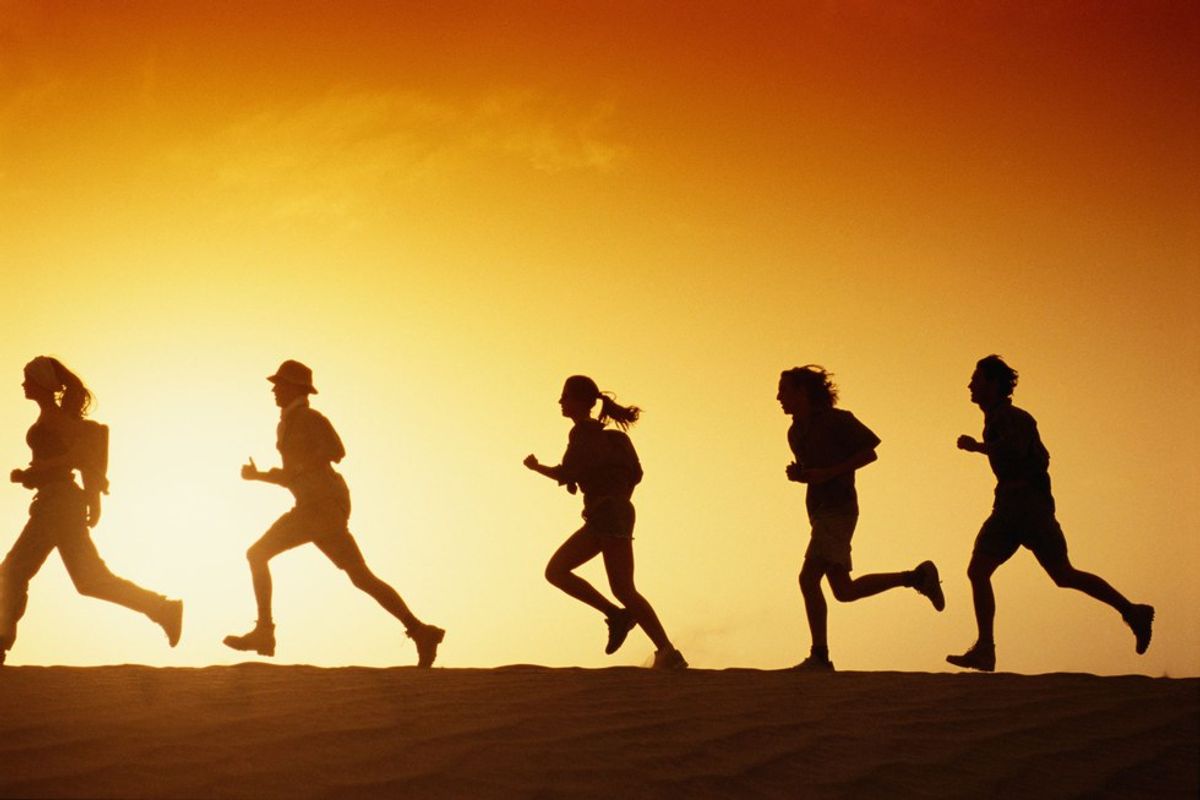 If you're like me, or any other runner on the planet, that's ultimately what running comes down to. It's a never-ending cycle of "I'm feeling great!", "Oh, that cramp is starting to hurt", "Yeah, I'm going to die today". Although that is somewhat of an exaggeration, I'm sure, at one point or another, all of those thoughts have crossed our minds during runs and workouts. As runners, we welcome pain with open arms, we embrace it, because that's what it takes to improve. We relentlessly put ourselves through countless miles up grueling hills, and onto uneven, grassy terrain. Needless to say, when I first started running, I had no idea what I was getting myself into.

To this day, my choice of substituting soccer for cross country and track fills me with conflicted emotions. I reminisce over my seven year soccer career, imagining what it would be like to have actually participated in a fun sport in high school. Then again, had I not given it up, I would not have been introduced to the rewards(and horrors) of running. I made my transition in 7th grade, jogging (I was too slow to be running) on the treadmill for up to 3 miles, pushing through the burning pain that lanced through my calves and quads. It wasn't until the year after that I convinced myself to join the cross country team. Here's where my naieveté really kicked in, because although practices were only 2-3 times a week, and each practice consisted of a timed 1.5 mile run, I didn't think it could get any harder. Not because of the distance (although high school was a rude awakening), but because of the pace we were expected to run at. I was introduced to cross country races that year, experiencing the intensity and pressure to perform well. Anxiety fluttered through my stomach before every meet, but I felt a strong sense of accomplishment after crossing the finish line. Before long, I had caught the running bug, joining the track team in the spring, and signing up for high school cross country without a second thought. I was about to embark upon the greatest journey of my four years in high school.

I still remember that first practice, curious, interested, not knowing what to expect. The coach explained our workout for the day, a "rabbit run", in which groups based on ability would try to catch each other. If caught, a group would have to run additional laps on the track. I was immediately apprehensive. This was triple the amount of an average middle school practice's mileage, not to mention everyone around me looked extremely fit and fast. In retrospect, I'm glad the first practice was so difficult (for me at least), because it shocked me into understanding the dynamic of high school cross country. I wasn't in the little leagues anymore. Day in and day out, rain or shine, we were outside pounding out 5-7 miles. It became a routine, to the point where my life was comprised of three constant parts; school, practice, and home.

And yet, despite the strict time commitment, despite the often painstakingly long workouts, despite all of it, I wouldn't have traded those four seasons of cross for anything. From starting out as a freshman, to joining the varsity squad my sophomore year, to becoming a captain during senior year, I not only grew as a runner, but as a person. My coach once told me that running is 90% mental and only 10% physical, because if you have the grit and the determination to succeed, there is no limit to what you can accomplish. The physical, and more importantly, mental, strength that I developed during each race was proof that I had more fortitude than I could have imagined. Above all, though, I cherished the relationships I built while on the team. After suffering through mile repeats and 6:30 AM bus times for meets, you can't help but become close friends. Cross country has individual elements, but success is derived largely from its team components. We all struggled with our mental barriers, learned from losses, and celebrated victories, together and united as one team. That was our greatest asset, taking strength and solace from each other when we didn't have strength of our own.

This isn't to say I enjoyed every part of my high school running journey. Pain was like an irritating fly you could never get rid of. It kept coming back, day after day, until eventually it became a constant as well. Friday speed workouts were especially interminable, poor race performances silenced the entire team on bus rides home, and for me, running while fasting over the summer was a true test of willpower. While these experiences were not enjoyable, however, they contributed to making me a better version of myself, constantly improving and learning. And that's why, from day one, I was always proud to call myself a runner.