"Wicked" jokes aside, Odyssey has truly shaped who I am, one year after beginning. 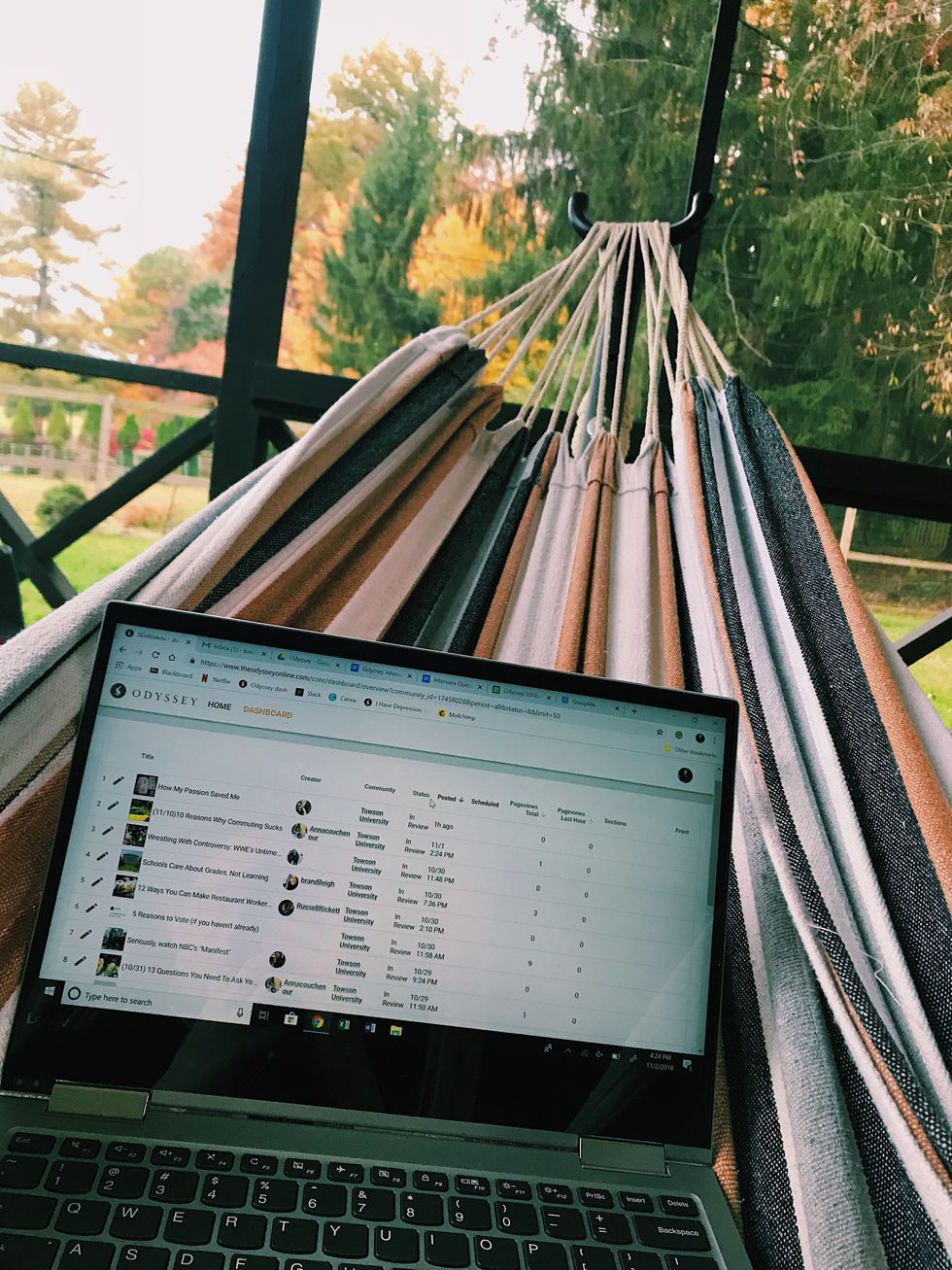 When I first heard last October that Towson University was re-starting their chapter of Odyssey, I immediately knew I had to apply.

I had been following the page for a while by that point and enjoyed what I read. I found some of the articles incredibly relatable, especially those on mental health. To read what others had written, to see those shared experiences, made me feel less alone. It made me wish I could do the same.

Last October, I officially applied. By November, I had interviewed for and made the team. And lord knows I had no idea just how much writing for this team would change me.

Odyssey helped me grow as a person.

Those weekly chances to write about topics and issues that were important to me shifted something within. I had returned to therapy only a couple months prior to joining the team, and writing became my outlet to process all the anxious and depressed thoughts and feelings whirling around in my head.

I wrote on past experiences. I wrote about being without a friend group, returning to therapy, and how music saved my life. With each piece that I wrote that reflected on my past, I could feel myself changing inside. Writing about times that had been hard for me forced me to realize how different things were now, how far I'd come and how much I'd grown as a person. Those articles allowed me to look back and realize, "Hey, I'm actually okay about that now." I could feel the inner wounds beginning to heal.

Writing for Odyssey helped me find my voice.

I had always liked writing, but writing for Odyssey took that further. I realized that I loved writing: the act of putting into words everything that I wasn't quite as confident to speak aloud. I was never a good speaker, but I could always say exactly what I wanted and how I wanted to say it when I wrote.

My writing got better as time went on. I developed a writing voice that both stated my own experiences while generalizing them to others. Inserting a space where others could find themselves within my words, if not my exact story. I wrote pieces that empathized to others who might be in similar situations, such as my piece on suicide, and do my best to address any "what if's" people might raise when reading the article.

I used Odyssey to vocalize my fear and anger after an anti-Semitic attack occurred to two of my fellow Jews and students, just off-campus. The Odyssey gave me a way to speak up in an affluent manner, rather than spew off in a Facebook post.

Writing for Odyssey helped me figure out what I want to do with my life.

The semester I began writing Odyssey, I switched majors. It was a complete 180 from what I had initially planned to do, and I felt like the ground had been ripped out from beneath my feet. Writing every week and learning the best ways to share my articles reminded me of why I had switched majors: to do things I was actually skilled at, to take those skills and turn them into a future career for myself. Writing for the team helped me become more comfortable with my new mass communications major.

I became president of my team in July. Carrying out the responsibilities of this position has only confirmed that marketing is where I want to head in life, and has given me experience in areas I just know I'll be using down the line.

But most importantly, Odyssey gave me a community.

I've spent hours chatting with my teammates, gabbing with my team co-leader over life and team things, and helping writers out when problems arise. Two of my writers share classes with me.

I was incredibly alone when I first started at Odyssey. I had just walked away from a toxic friend group and was struggling to adjust to being on my own most of the time. Now, I have a whole community of caring people with shared interests, amazing personalities, and a common passion "near" me at all times. I've made friends (and the fact that I'm applying that word is big for me if you know me) who I know I can text about things and make plans (someday soon!!) to just hang out. And it's been incredibly healing for me.

Being a part of Odyssey changed me more than I would have ever thought.

And I'm so grateful for it every day. (Even when I give up homework time to do Odyssey work. Like right now, as I write this.)

All jokes aside, writing for Odyssey changed my life, and I will forever be grateful for it.

odyssey
Report this Content
This article has not been reviewed by Odyssey HQ and solely reflects the ideas and opinions of the creator.