How slam poetry has developed from personal expression to now making political change. 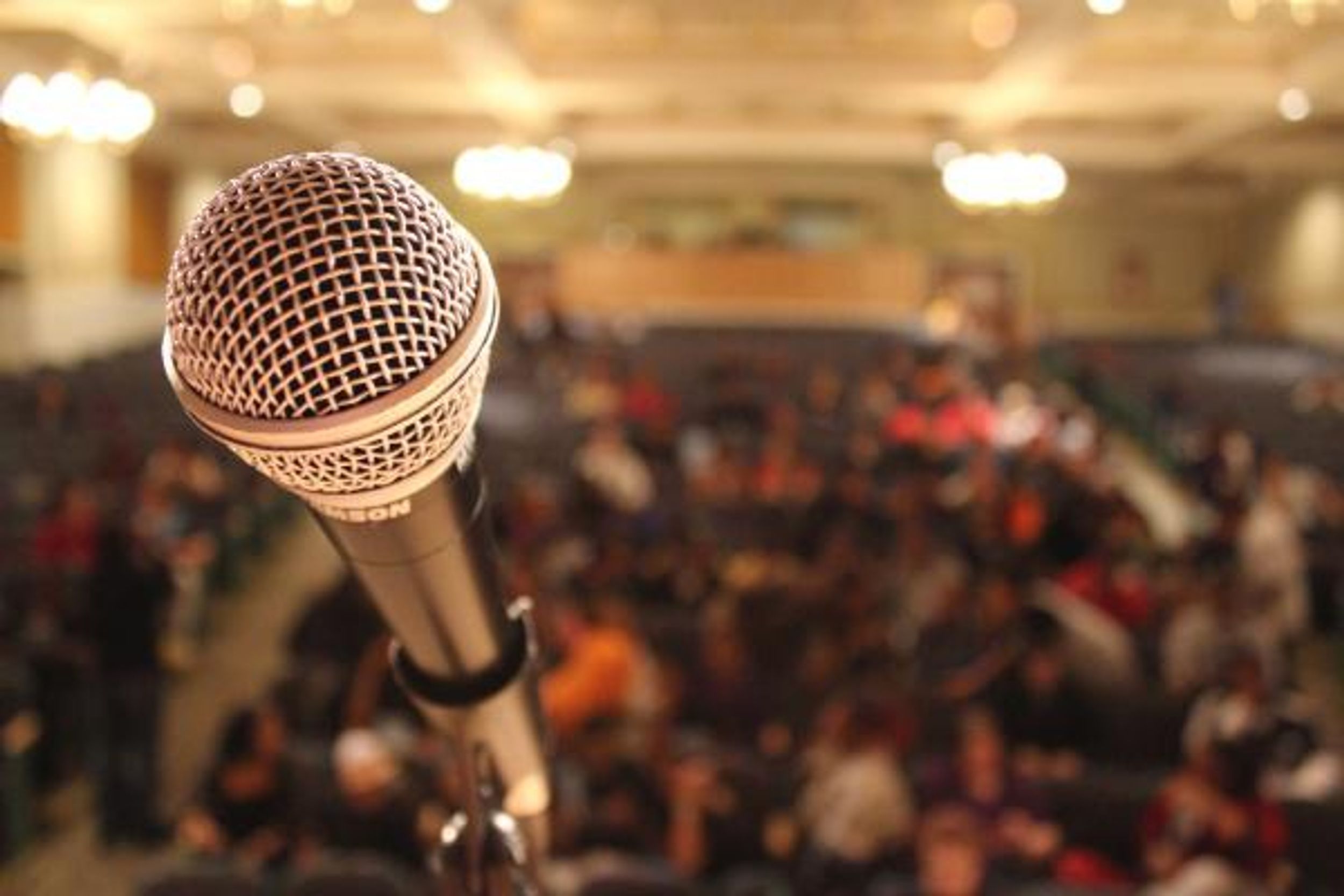 Slam poetry is a spoken word form of poetry, which is largely influenced by free verse, rap, and “beat poets.” In the United States during the 1980s, open mic nights started becoming popular at cafes in cities like New York and San Francisco. In 1984, the Slam Poetry Movement was officially founded by Marc Kelly Smith, otherwise known as “Slam Papi.”

The culmination of the art form began at the Get Me High Lounge in Chicago, Ill. in November; it was called the “Monday Night Poetry Reading.” Marc Smith believed that academic poetry was far too structured, so he introduced this new form of poetry which incorporated more artistic freedom and expression.

Slam poetry was on the rise: in 1990, the first National Poetry Slam took place in San Francisco and was organized by Gary Mex Glazner, featuring teams from Chicago, New York and San Francisco. "Russell Simmons' Def Poetry Jam," an HBO show which ran from 2002 to 2007, helped popularize slam poetry in the mainstream.

Now, there are various organizations across the United States promoting slam poetry; you can watch tons of poetry slams on YouTube from some groups, such as Button Poetry and Poetry Slam, Inc. There are also various slam competitions you can attend, like the 2016 National Poetry Slam and the Women of the World Poetry Slam.

Slam poetry is an important medium of communicating a story or message, which may otherwise go unheard. It is essential in representing the true narratives of performers of all genders, races, sexual orientations, religions and backgrounds.

Slam poets make the “personal political” by articulating tales that oftentimes may be hard to hear or understand, but important in creating a more loving, understanding and peaceful world through educating others on the personal struggles and experiences of marginalized groups, such as those with mental disabilities or rape victims. Below, I have inserted my 10 favorite slam poetry videos from YouTube.

This is an awesome poem by Samantha Peterson; it is extremely empowering to women. I would describe it as a feminist social critique of the practice of "catcalling," and her personal experiences with being catcalled. If you are unfamiliar with the term, catcalling is "a whistle, shout or comment of a sexual nature to a woman passing by," it is a form of sexual and street harassment, which often does lead to other forms of aggression.

In this poem, Neil Hilborn, one of the most incredible slam poets out there, eloquently describes what it is like to live with OCD, to love and to be brokenhearted. This poem is extremely heartfelt, emotional and also debunks some of the social stigmas surrounding mental illness. He incorporates a more academic style in the language within his flow and diction, while still maintaining a hilarious undertone. I love his brutal honesty and realism.

3. "To Be Black and Woman and Alive" by Crystal Valentine & Aaliyah Jihad.

This is one of the most powerful slam poems I have ever heard, by two immensely incredible poets, which debunks the misrepresentation of black women in the media and whitewashing in broad society. They describe how personal the hate that black women experience in a white supremacist patriarchal society is for them as black women in the U.S. This poem is so beautifully sad, it is real.

4. "10 Things You Should Know About Being an Asian from the South" by G. Yamazawa.

In the most hilarious and serious ways possible the poet G. Yamazawa describes being biracial and how he has been influenced simultaneously by both Asian and American cultures. He discusses the forced assimilation and racism in the United States, which is only perpetuated by misrepresentations of his culture in films and TV shows. Making the personal political, G. Yamazawa reclaims his culture by embracing some of the stereotypes and turning them into empowering things through metaphor. It is really inspiring and introduces a new narrative. I believe it is also a social commentary on how globalization may alter how one identifies, and what cultures they identify with.

Lily Myers' "Shrinking Women" is one of my all-time favorite poems, and it's one of the first slam poems I ever watched. It is about how mental illnesses or disorders can be "passed" down, and how we learn social behaviors from our family members, which influence our behavior. She describes what it is like to have an eating disorder in an extremely personal and powerful way. There are a lot of stereotypes surrounding eating disorders, which I believe she does an excellent job of destroying.

This poem is a step into the poet's past. I think of it as advice for girls out there, and advice she wished she had received when she was a young girl with pink hair. While not saying it directly, this poem smashes the patriarchy and allows young girls to be whoever they want to be. It recognizes the strength in girls and their power to overcome.

7. "Asking for It" by Anna Binkovitz.

This feminist and anti-slut shaming poem by Anna Binkovitz has a special place in my heart. It reminds me of the fight that organizations like "Take Back the Night" are for: ending sexual violence against women, the stigmas surrounding rape, and debunking the myths that rape culture only perpetuates. A common misconception about rape victims is that they "deserved" their assault because of the clothes they were wearing; this has been used as an excuse for rape in court, which is absolutely ridiculous. She reminds us all of the importance of consent in preventing rape. Anna Binkovitz attacks the idea that someone would be "Asking for It" with this slam poem.

In "Lost Voices," Darius Simpson and Scout Bostley switch voices -- they speak for one another in terms of racism and gender oppression. It is a truly empowering poem, while it does not compare what it is like to experience misogyny and racism, it does a fantastic job of explaining how ridiculous both are, and how we as a society should more accurately represent their voices and change the way we treat both marginalized groups. Their stories are all too common, and the personal is political here because they introduce important counter-narratives, which are missing from mainstream media.

9. "Explaining My Depression to My Mother" by Sabrina Benaim.

In an emotional, but empowering and realistic poem called "Explaining My Depression to My Mother," Sabrina Benaim tells a very personal story of life with mental illness; a life that millions lead, but few talk about. The social stigmas surrounding mental illness often create a divide in families, and make those living with them feel extremely alone. The negative way we treat people in society with mental illness only makes the quality of life worse and promotes harmful stereotypes.

These poets so eloquently say what oftentimes most people do not have the courage to say. Their self-expression and solidarity with those like them, allows their personal stories to become political. They, like many other young women, already know patriarchy, know misogyny, know systematic issues and other societal injustices that occur in America. It is also a commentary on the lack of free thinking, and the way we educate children in different states, oftentimes telling history through a lense of white privilege and colonialism. They talk about how the lack of education and ignorance in society, only make these conditions worse. Our society is not as perfect as we like to think it is.