The Macaulay Marauders Are Doing College Sports Their Own Way
Odyssey

The Macaulay Marauders Are Doing College Sports Their Own Way

Learn more about the captains. 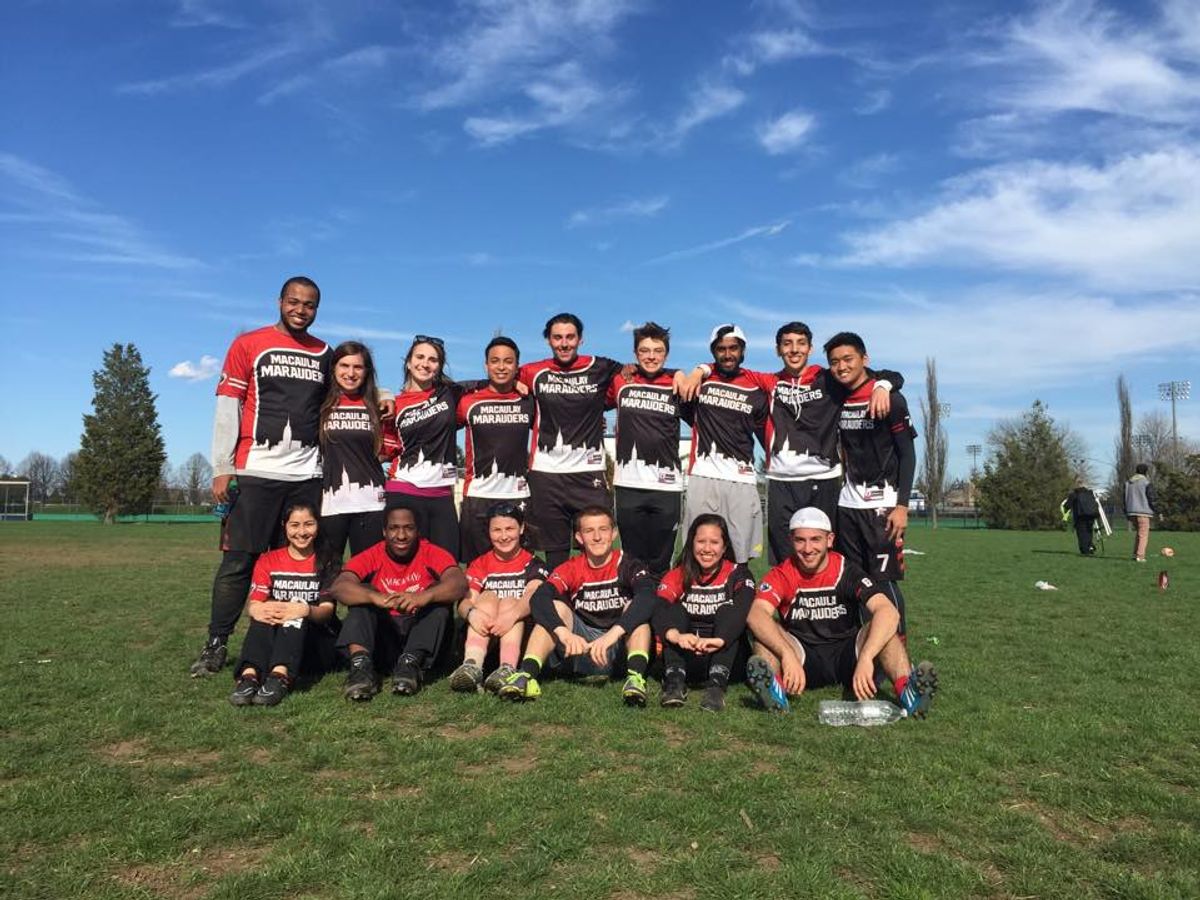 Steven Ficurilli, Jennifer Freund, and Christian Barnes are not your average collegiate athletes. They don’t compete in Division I, Division II, or Division III; in fact, they’re not affiliated with the NCAA or any collegiate athletic association at all. They compete in the Big Apple Quidditch Conference and the Northeast Region of US Quidditch. Together, the three captain the Macaulay Marauders, a team from the City University of New York’s honors college, Macaulay Honors College. Individually Freund, Ficurilli, and Barnes are just three students from a relatively unknown school playing a relatively unknown sport, but together, they’re making an impact on the New York quidditch scene.

Although the three play a sport from the Harry Potter universe, they all started college with sports histories. Ficurilli, a native of Lindenhurst, NY, played baseball his entire life and is a black-belt in karate. Freund, who grew up in Brooklyn and Staten Island, was a softball player at New Dorp High School. Barnes, who was born and raised in Fort Greene, wrestled for Brooklyn Tech. Macaulay, however, has only one sports team: the quidditch team. Despite their athletic backgrounds, they didn’t join to be considered athletes, but rather because they fell in love with the Marauders and the quidditch community at large.

According to Barnes, it was “meeting the people on the team and seeing how fun Quidditch was” that made him join the team. Ficurilli joined the team after being recruited by a friend from high school, but ended up loving it because it’s “filled with kind and weird people sharing a lot of common interests.” Perhaps the strongest testament to the benevolence of the team and the community is Freund’s reason for joining. “While I was studying abroad in China I made a really good friend who happened to be on the quidditch team.” He kept recruiting Freund, who was initially resistant. However, when Freund returned stateside, she “wasn’t in a good place,” and joined the Marauders in an effort to take her mind off things. She hasn’t looked back since, and refers to joining the team as “the best decision [she’s] ever made.”

While the three are clearly having fun, they are also serious about the sport and the team. Beyond leading weekly practices at East River Park in lower Manhattan, the three play in house and recreational leagues that allow them to improve themselves as players and as leaders. By all accounts, their efforts are paying off. Saif Zihiri, a freshman on the team, lauds Barnes’ abilities to push the team while being an astute, observant coach. “Christian tells us not only what he sees, but how we can improve. During every practice, every scrimmage, every game he is cheering us on the sidelines and as soon as the game is over, he's taking us to the side discussing what he saw and how it could be better,” Zihiri says. “He focuses on our constant improvement and refuses to accept our arguments that we are at our max.”

Aliyah Meyer, also a freshman Marauder, points to the first practice as an example of Ficurilli’s leadership: “after the practice was over, Steven called us in for a huddle and discussed the strengths he saw in us, but more importantly, the strengths he couldn't wait to see as we grew as athletes. Rather than telling us he hopes to see us next week, he told us that he would see us next week, as if there was no doubt in his mind that we would all be coming back to become better and more effective athletes.” Meyer said that it was nice to see someone who was so enthusiastic and interested while still being genuine. “I knew right away that it wasn’t forced. Steve genuinely cares.”

Freund, on the other hand, has drawn praise from her teammates for pushing them to be the best that they can be while being sensitive and understanding. Ross Scopellite, a sophomore on the team, commented on how Freund “looks to each of [the Marauders] and sees a better player.” However, Scopellite made sure to stress how Freund looks at each player individually and pushes them to exceed as an individual and as a member of the team. “Jennifer has the ability to see our limits. She understands what each one of us is currently capable of and what we can be capable of.”

While the trio has made an impact on their team, they’ve also made impacts on the quidditch community. Freund was recently featured in The Quidditch Post’s “7 Players to Watch,” and has been praised as one of “the very best in the region.” Ficurilli, who has dove head-first into the sport, has gone to as many tournaments as possible and played for the New York Titans of Major League Quidditch last summer. Barnes has made a similar effort to be involved, and has attended countless fantasy tournaments and spent the summer training with some of quidditch’s best players.

Despite their quidditch acumen, however, it seems as if quidditch might not be in all of their futures. When asked about their post-grad quidditch plans, all three gave different answers, but their love for the Marauders was clearly evident. Ficurilli stressed that while he loves quidditch, it’s time-consuming, and he’d like to focus on his career in counter-terror. “Plus, I doubt I would enjoy playing on a team that wasn't Macaulay.” Barnes, on the other hand, was less certain. “I grew to love this sport with my team,” he said. “Without a bond with a team, Quidditch becomes more of a chore than a sport, and it loses a lot of the fun that draws so many people in.” However, Barnes would continue to play if it meant continuing to see his pupils progress. “If I do find a bunch of friends and join another team after I graduate, I would love to play in with the underclassman I’m training now and continue to watch their growth.” Freund gave me the most direct answer when asked whether or not she planned to play after finishing at Macaulay, sparing but ten words. “No. I only want to play for the Macaulay Marauders.”

It is evident that Freund, Ficurilli, and Barnes all love the sport, but more importantly, the team they captain, and it is even clearer that they are respected and adored. What the future holds for the three is yet to be decided, but it is evident that they are well-poised to be leaders in whatever they do. While quidditch may not be considered by all to be a “real sport,” there is no question that the three are real athletes and true leaders, whether it be on the pitch or in the community.

Emmaline B
The Narrative
31932
https://unsplash.com/photos/O0T1SIgHAfM