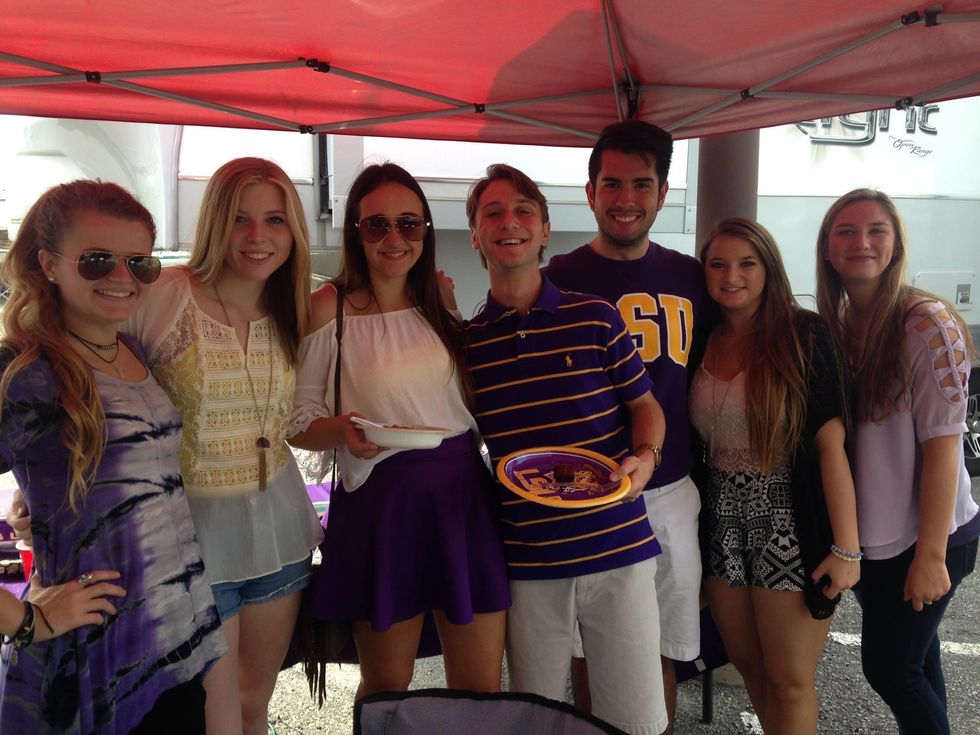 One year ago, the death of LSU student Max Gruver shocked the campus. This tragedy called for a social change in the Greek Life community and the entire student body.

Following Gruver's death, LSU President F. King Alexander ordered an immediate suspension of all Greek Life activity and announced the formation of the Greek Life Task Force (GLTF), Mari Fuentes-Martin, the dean of students and board member of the GLTF, told me.

"Rules related to tailgating fell under my responsibilities," she said.

To provide student safety, these new restrictions require that all fraternities must host their tailgates in their chapter's house. This new policy, labeled PS-78, ensures the parameters necessary for safe tailgating by banning hard alcohol, common source containers and requiring a third party vendor. Also, each member of a fraternity is permitted only three outside guests, limiting the number of people at each tailgate, she said.

The support to alter the tailgate culture remains wide, but she continues to receive mixed reactions toward the new restrictions, Fuentes-Martin said.

"This is complete bullshit," said Michelle Buie, a senior at LSU. Holding tailgates in a frat house creates an even greater risk of drug and alcohol abuse because it is a closed environment, she said.

When the parade grounds hosted the Greek tailgates, everyone easily saw everything, this reduced the risk of hazing and other dangerous activities. Since Greek tailgates now occur in a private location, fraternity members are able to resort to their rooms for drug use or hazing, she said.

These restrictions also put a potential increase on sexual assault incidents. If a student passed out on the parade grounds, there was no hiding it and they received immediate help. Now, if this were to happen in a frat house, the student could easily be taken advantage of, she said.

"I'm scared these new rules will only backfire, leaving us with another tragedy or even worse," Buie said.

These restrictions are not only potentially dangerous, but they also reinforce the stigma that Greek Life is exclusive. Students are now forced to create their own, unorganized and unsupervised tailgates, where in the past, the parade grounds offered all students a comfortable and close environment with adult and police supervision, Buie said.

"These rules ruin the legendary LSU tailgate culture of accepting all game day lovers," she said. In the past, tailgating was open for all, but now a student must be on a guest list.

Overall, Greek members' reactions toward the restrictions remain negative, but understanding to the Administration's efforts to establish a safer environment, Buie said.

The GLTF spent countless hours of planning and discussion when it came to the restrictions, Fuentes-Martin said. With these restrictions, the GLTF expects the elimination of all assaults and confrontation.

After meeting with stakeholders and listening to their concerns, the GLTF complied the feedback and found trends in priority matters that required alterations, with the tailgate culture as a top concern, she said.

As the administrative supervisor for Greek Life, Campus Life and Student Advocacy and Accountability, Fuentes-Martin collaborated these units for the creation of the new procedures and enforcement necessary for the new tailgate plan.

"I am very proud to have worked on this massive project for the past year and see the significant changes that have already occurred," Fuentes-Martin said.

As a student affairs professional for over 25 years, Fuentes-Martin continues to work with a community of colleagues concerned about high-risk behaviors and how to proactively prevent harmful situations on campus.

The GLTF realizes this year will bring the most challenges since significant change often begins with resistance and chaos, but they hope that over the next five years these new restrictions will create a safer environment, Fuentes-Martin said.

"The response from every division of our huge campus is supportive of a new normal for LSU," she said. No one wants to see another student harmed.

"There has to be a true fear of repercussions to prevent violations," said Melissa Salamoni, a retired captain of the Baton Rouge police department. Students will fall to peer pressure and follow the violators of the new tailgating restrictions, she said.

Some students will follow the new restrictions without hesitation, but others will always find a way around it. Violators will either tailgate on other campus locations and not identify as a student organization, or they will tailgate off campus, she said.

"Swift and sure punishment for violators is a must," Salamoni said.

Administration must randomly inspect tailgate parties to ensure the student body's compliance with the restrictions. Students also need better education regarding the dangers of binge drinking, she said. Salamoni worked all of the LSU home footballs games throughout her 32 years as a law enforcement officer. During this time she encountered endless cases involving student injuries, sexual assaults, and illnesses, all caused by binge drinking.

Within one month, 37.9 percent of college students reported binge drinking compared to 32.6 percent of other people the same age, according to the National Survey on Drug Use and Health.

The new tailgating restrictions will greatly benefit the student body, but only if the LSU Administrations strictly enforces them, Salamoni said.

"Football season always causes an enormous spike in ER visits," said Steven Ragusa, an emergency room doctor at St. Elizabeth Hospital. As a father of three sons, each involved in Greek Life at LSU, Ragusa is aware of the risky activities and potentially dangerous outcomes that each tailgate offers.

When students submerge themselves in an environment ruled by alcohol, they lose their senses and convince themselves that binge drinking is normal college fun, he said.

Students forget how to drink this time of the year. Hopefully, these new restrictions will lower the number of stomachs pumped and serve as a proper guide to healthy tailgating, he said.

No parent should ever undergo the death of their child, especially to something so preventable, Ragusa said.