How The Letter From Birmingham Jail Applies To Colin's Protest 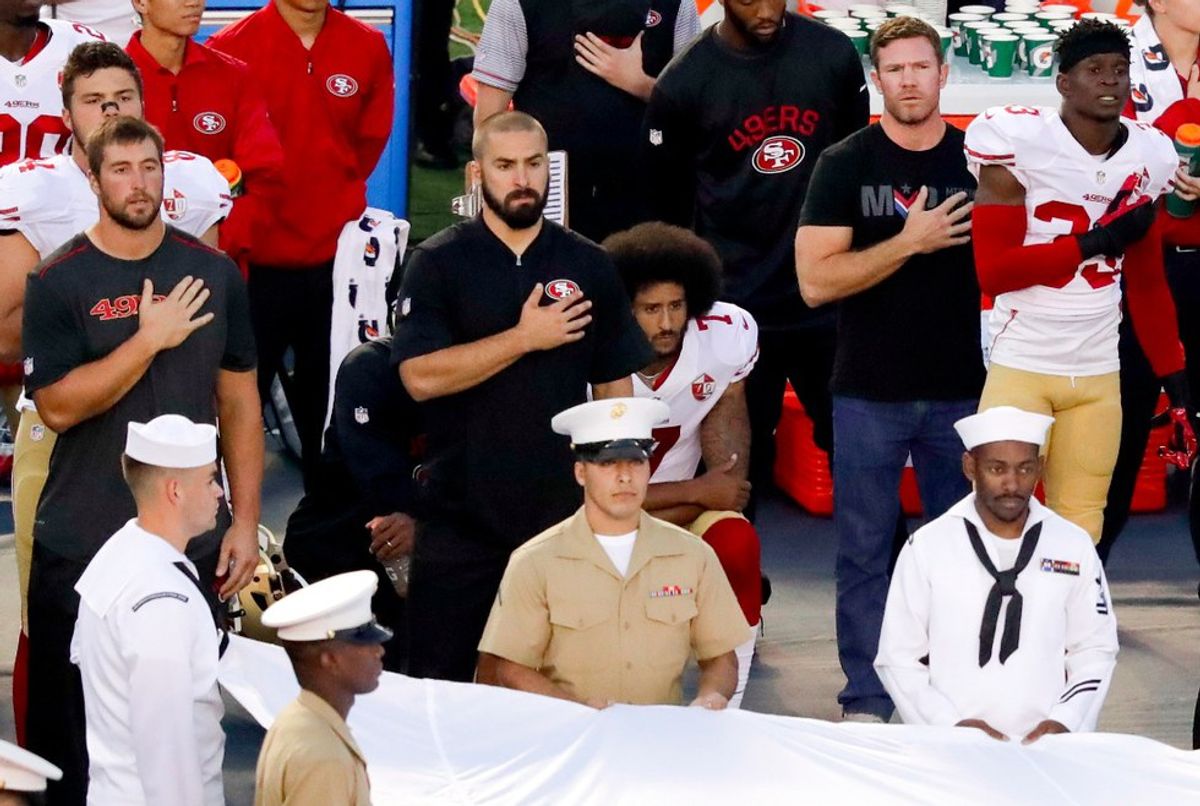 "I am not going to stand up to show pride in a flag for a country that oppresses black people and people of color. To me, this is bigger than football and it would be selfish on my part to look the other way. There are bodies in the street and people getting paid leave and getting away with murder," Colin Kaepernick told interviewers after the San Francisco 49er’s pre-season loss to the Green Bay Packers. The game was not what sent the press abuzz, but rather it was Kaepernick’s refusal to stand during the National Anthem. In response to the highly publicized police killings of Black and Brown people and the lack of justice for victims, Kaepernick refused, and is refusing, to stand for the National Anthem.

As an American citizen, he decided to exercise his first Amendment right. The symbolism of the National Anthem and the American flag creates confusion, a sort of dichotomy, in the minds of some Black people. It represents the abstract ideas of freedom, liberty and justice for all, but it also reminds them of the brutal past (and present) reality of Black people in America. This makes sense to many, and Kaepernick was clear and precise in his message. Immediately, he was met with backlash, labeled as un-American, anti-troop, anti-veteran. Many veterans spoke up on Twitter with the hashtag #VeteransForKaepernick, combating the idea that Kaepernick was protesting to insult the military.

The negative reaction was not surprising. Many criticized him for it, many saying that they understood why he did it but do not support his methods. This raises the question: which methods of protest do you actually support? If the act of not standing, a fairly peaceful, and non-disruptive form of protest is offensive and inappropriate, then that leaves very little room for any type of protest. No marching, no organizing, no rioting, no anything. So when people say they, ‘don’t agree with his method’, it seems to me as though they don’t approve of him protesting all together. They don’t want Colin to speak up about injustices affecting people in America. They just want him to throw the football and make touchdowns.

Those who have criticized Colin have been on the far right of the political spectrum, but there have also been many moderate critics who disapprove of Kaepernick protesting during the National Anthem. Seeing some of these comments, I was reminded of Dr. Martin Luther King’s “Letter From A Birmingham Jail”. Dr. King wrote the open letter as in jail after being arrested for marching in Birmingham. It was written in response to “A Call for Unity” a letter criticizing King’s actions written by eight white clergymen. King’s letter is poignant and as powerful as ever. I could probably write an essay on its relevancy. As you read along, I want you to remember Kaepernick’s actions. The excerpt from his letter is below (emphasis added):

“I must make two honest confessions to you, my Christian and Jewish brothers. First, I must confess that over the past few years I have been gravely disappointed with the white moderate. I have almost reached the regrettable conclusion that the Negro's great stumbling block in his stride toward freedom is not the White Citizen's Counciler or the Ku Klux Klanner, but the white moderate, who is more devoted to "order" than to justice; who prefers a negative peace which is the absence of tension to a positive peace which is the presence of justice; who constantly says: "I agree with you in the goal you seek, but I cannot agree with your methods of direct action"; who paternalistically believes he can set the timetable for another man's freedom; who lives by a mythical concept of time and who constantly advises the Negro to wait for a "more convenient season." Shallow understanding from people of good will is more frustrating than absolute misunderstanding from people of ill will. Lukewarm acceptance is much more bewildering than outright rejection.”

King’s words still ring true today. As we see community organizing, marching in the streets, and activists voicing their frustration with white supremacy, there is always harsh right-wing backlash. But more subtle, and more worrying, is the slight resistance of white moderates. It is this “silent majority” of Americans, both white and non-Black, who deep down do not approve of any Black liberation protests, whether they be aggressive protestors or a quarterback who refuses to stand during the National Anthem.

Glorie Martinez
1204
Why I Write On Odyssey