If the success of Zootopia brings a sequel, Judy Hopps and Nick Wilde's relationship will have to be defined. 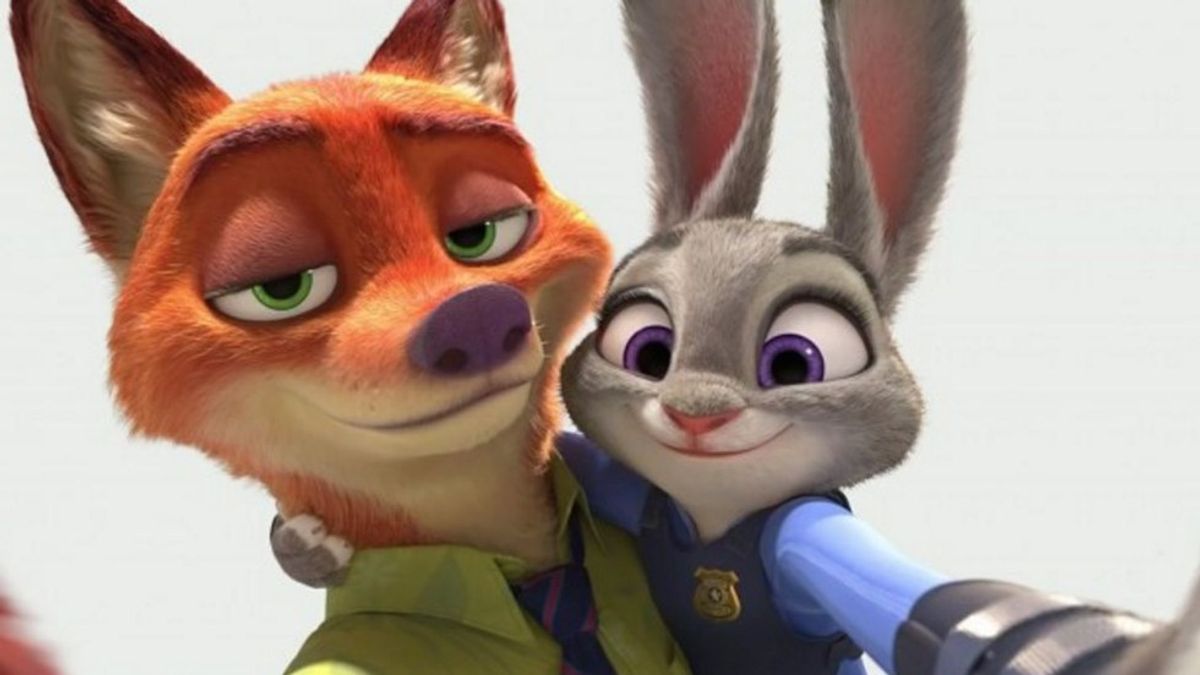 Disney made history for their animated films in the past few years tackling: the first black princess and an interracial marriage on the big screen with "The Princess and the Frog" (2009); having the protagonist female fight against marriage and end up alone in "Brave" (2012); promoting sisterly love and being anti-'love at first sight' in "Frozen" (2013); and upcoming film "Moana" (2016) which Disney has highly advertised as having no love interest. In line with this list, brings "Zootopia" (2016), where online fandoms and commenters have argued over the relationship of protagonist Judy Hopps and just as featured main character Nick Wilde. The ending is somewhat ambiguous, where the two share this exchange:

Is there a possible sequel in store for "Zootopia" fans? And which fandom will win the battle between platonic and romantic love? Until the creators officially make these decisions, we can only speculate, but ultimately having Nick and Judy get together may just be the type of groundbreaking move that Disney needs.

The main reason for those wishing for Judy and Nick to stay platonic is simply that the public is craving a male-female friendship that does not end in romance. And so far, Disney has not shown many examples of this. For those yearning a platonic relationship between Judy and Nick, revisit Toy Story 2 and 3. Although Jessie and Buzz do end up together in the third movie, this Pixar film broke ground by not coupling the cowboy Woody and cowgirl Jessie, letting them remain close friends. It indeed would be monumental for Disney to present viewers a new close opposite gendered bond that only stays friends, even when they could be easily written as romantic interests. And Disney should do that soon...but not with "Zootopia."

What a "Zootopia" sequel could accomplish is an array of other big ticket issues. The first movie handled topics like racism, sexism, and individuality. Here are the five revolutionary situations that the "Zootopia" franchise can tackle if they put Judy and Nick in a relationship:

1. Actually liking and being friends with their love interest

This is a huge one that Disney has failed to present so far in their animation. How many Disney princesses marry their love interest because of immediate attraction? Realistically, many relationships form out of friendship first, and those tend to work better in the long run because they actually like each other. Although Judy and Nick had a rocky start full of his wit and her blackmailing banter, they quickly became friends as the case unraveled. Losing him to her own her subconscious prejudice, brought Judy to tears. And later, she offered him the application to attend police academy and become a cop. This was a true sign that she felt completely safe with him and that she could stomach being around him every single day, together side-by-side. One has to wonder if Ariel and Cinderella got bored of their princes years after their whirlwind romance. "Zootopia" gives faith that Judy won't.

2. The Taboo of Interspecies Marriage

In 2013, outraged fans of the General Mills cereal, Cheerios, caused an uproar. Why? Because the company featured a Cheerios ad with an interracial family. Is America still prejudice? Considering the messages pushing for acceptance and fighting stereotypes, "Zootopia" proves we still need to learn this lesson. And what a better way to conquer that than interspecies marriage! Even the directors said that they had planned interspecies couples, but had no room to add them in the final cut of the movie. Judy's parents were so adamant that foxes are killers, that they gave her fox spray before going to "Zootopia." Even though at the end they had partnered businesses with the neighborhood fox, how would they react to her daughter dating one? With only being shown a bunny couple and otter couple, one can assume that interspecies marriage is somewhat uncommon. It is 2016, and children should be exposed and taught that interracial marriage is normal and common. This lesson is way too easy to slip into "Zootopia" to be ignored.

Feminists have said that Disney has not shown enough powerful women, citing movies like "Sleeping Beauty," or only shown women being involved as a love interest, citing movies similar to "Aladdin." Disney has responded to this outcry with productions like "Brave" and "Lilo & Stitch," respectively. Judy Hopps would never let anyone, including a love interest, stop her from pursuing her dreams. Keeping Judy Hopps as a feisty, gung-ho, rabbit that does not let anyone stand in her way, is critical for a sequel and helps Disney better their feminist image.

There is no evidence to suggest that Judy and Nick have an unequal power balance at the end of the film. This is a perfect chance for a children's movie that provides the audience with a healthy relationship, even if they are predator and prey. With the knight in shining armour troupe and the vampire obsession coming to a close, it is time for some healthy, balanced relationships to be seen onscreen.

To add to this, one of the early drafts originally had Judy gunning for a higher position at the ZPD. In a sequel, with her success rate she could work her way up the ranks to chief of police. Undertaking the complicated situation of being married to a coworker, or employee, it would be an interesting turn to see Judy and Nick try to maintain their harmonious balance without jealousy or workplace issues. Although a more difficult subject to deal with, the writers have accomplished so much already in "Zootopia," that in a sequel, this complex plot could be simplified and full of laughter.

"Lilo & Stitch" brought the heartwarming tale of a broken family, where two sisters beat the odds despite tragically losing their entire family. Familial relationships are just as important to show to impressionable kids. However, even though Disney is famous for having movies following the non-traditional and nuclear families, the subject of adoption is not often touched. There are many couples that cannot conceive, and with the legalization of gay marriage, adoption is now even more prominent, and therefore is overdue for more Disney movies. Adoption is a touchy subject, often having parents wondering what the best way to explain it to their children is. With choosing to have Judy, a bunny, and Nick, a fox, settle down and wish to have kids, the adoption subject comes up rather smoothly. We all would love to see some "funnies" and "boxes" but maybe in the "Zootopia" universe, interspecies couples cannot have kids. What a better way to show that adopted children can still be loved and cherished as any other child, than by our two lovable protagonists.

5. Not Making the Movie Completely Based Around Their Relationship

To all those wishing Judy and Nick will stay simply as good friends, may I offer a compromise? "Zootopia" was hardly a lovey-dovey movie, and the sequel should follow suit. If Judy and Nick date, get married, adopt--that should stay a subplot. Seeing their relationship escalate, maybe with a funny wedding toast, would be a nice opener to "Zootopia 2." But just like Judy following her dreams of becoming the first bunny cop, her personality would not allow for the abandonment of her ambitious ways just for love. And with Nick completely changing his life around from con artist to cop, it would be unlikely that he would give that up either. Judy and Nick, even if parents, would still go on daily adventures and work hard at cracking their next case, side by side.

There is a way for everyone to be happy, allowing new lessons to be taught to the impressionable youth, and keeping the playful banter of our beloved rabbit and fox. As Judy said, "real life is a little bit messy," and if we were to ignore that life happens and people fall in love, get married, have kids, it would be a lie. So let us just agree that Judy and Nick make a good team and see where life takes us.

Caitlin Marie Grimes
University of South Florida
6434
Beyond The States