He's no Gretzky or Lemieux, but John Scott may be more important than either in the long run. 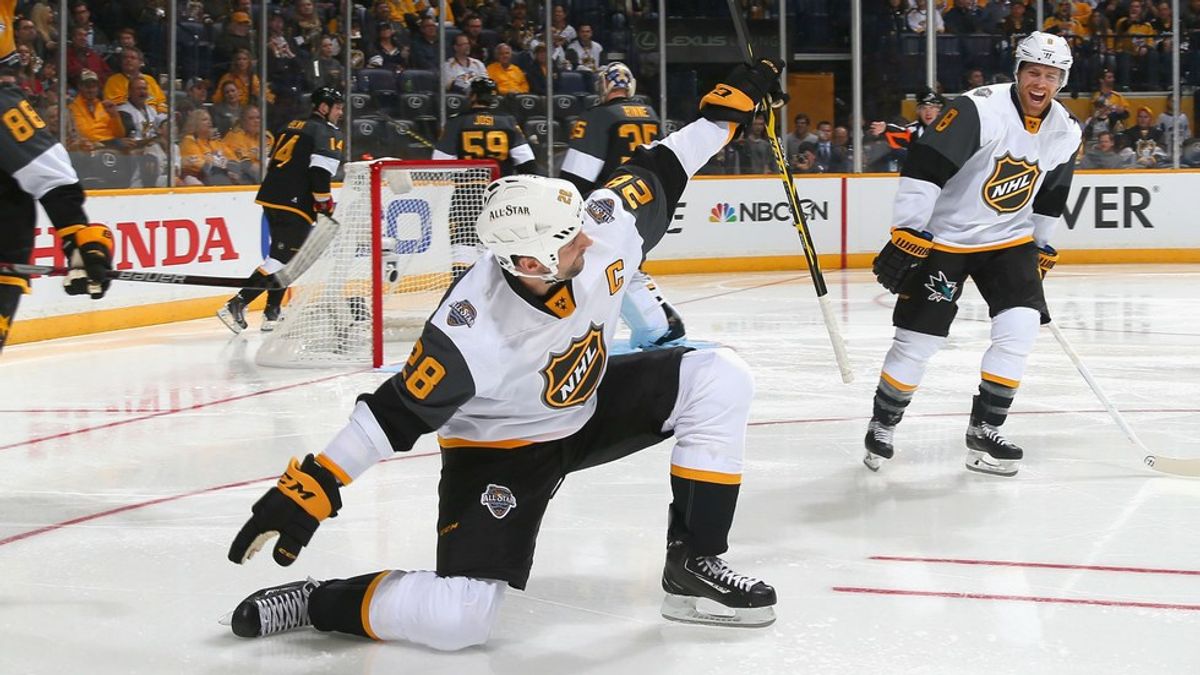 Welcome to stardom, John Scott. Despite what the National Hockey League says, you've earned it.

He wasn't a star until recently. In fact, for almost his entire career he's been reviled as a goon, a relic from a past era of hockey when brute force could match raw skill. He was among the last of a dying breed, someone who fought other guys because there wasn't much else he could do. So far, he's played in 285 NHL games and has a total of five goals and eleven points (goals and assists). He hasn't scored since the 2014-2015 season, and that was the only time he's scored more than once in the same season. He was a journeyman; he had never stuck with a team for more than two seasons. He had no fans outside of the people who knew him personally. He was a complete afterthought.

Until the All-Star Fan Vote, that is.

On some level, it started out as a cruel joke. The league allowed fans to vote for captains of this year's All-Star team. The top vote-getter in each division became the captain of their team. Simple enough. But the league forgot to account for one thing: hockey fans have a sick sense of humor. Somehow, fans decided to collectively vote for Scott as many times as they were allowed to, purely to mess with the league by voting for the worst player they could find. The league attempted to dissuade fans from doing this. Scott himself told fans to vote for his teammates, who were more deserving. But hockey fans are not so easily deterred. As the deadline passed, Scott was easily named the captain for the Pacific Division.

At first, some fans felt regret for actually voting him in. After all, Scott was the butt of a joke. The reason he was voted in was because the league wouldn't want him there. He's a human being with a young family. Had fans, in their desire to anger the league, messed up the life of an innocent man? Thankfully, they didn't, as Scott began to embrace his role. The more he got into it, the more fans embraced him. This really had the makings of a good story.

Then the league had to preserve the sanctity of an All-Star Game.

A week before the All-Star Game, John Scott was traded by the Arizona Coyotes to the Montreal Canadiens, who then immediately demoted him to the American Hockey League. The league said he couldn't play in the game anymore. You can read Scott's account of the events here, in his own words (language warning).

It didn't take a genius to figure out that the league was probably behind the trade, so fans revolted. Many demanded that Scott, who had been voted into the game by the fans, be allowed to participate. After a brief period, the league assented to the fans and allowed Scott to captain the Pacific Division for one weekend.

This was already shaping up to be a weird All-Star weekend, between Scott's captaincy ad the new format for the game. Instead of one game, four 3-on-3 teams would play a tournament for a total of three games played.

And you know something? Scott did great. He scored two goals in two games! He even got into a "fight" with former teammate Patrick Kane! He threw the only hit in the tournament! He led the Pacific Division to victory! He should be a shoo-in for MVP, right?

Leave it to the league to kill fun again. He wasn't among the league-approved finalists for MVP. During the game, analyst Jeremy Roenick asked Scott's teammate, Brent Burns, if they were trying to set Scott up for easy goals. Commentator Mike Milbury totally disrespected Scott throughout the night. It almost seemed like a concentrated effort to bring Scott down. And the fans had none of it.

They wrote Scott in for MVP. He won in a landslide. Teammates carried him on their shoulders after the Pacific Division won. It's a great story on its own. But it doesn't end there.

For years, sports leagues have trampled on their fans with impunity. Every sport has a major issue plaguing it; the executives ignore these issues because it's bad for business. That's all sports are to executives: a business. Never mind the lives that can be affected by "business decisions"; as long as commissioners and owners keep the money rolling in, they literally could not care less.

NHL fans drew a line. No more would they let "business decisions" get in the way of the right thing. John Scott was voted into the All-Star Game through the system the league promoted; therefore he should play in the All-Star Game. Not a difficult concept. But because the league saw Scott's presence as bad for business, they did everything in their power to remove him from it. They might have gotten away with it if fans were as apathetic about Scott as they were about other issues the league got their way on. But fans took a stand. Whether it was getting to know John Scott the human being, or just general frustration towards the commissioner and his lackeys, or some other reason altogether, or some combination of those reasons, is difficult to figure out for sure. But the fact that fans didn't let the NHL get away with this shows that there may be a fundamental change in American professional sports.

There is frustration across the board among fans of all major sports. Commissioners are some of the most hated men in America. So why let them get away with their misdeeds? The NHL All-Star Weekend may be a wake-up call to fans.

We have all the power. Whether or not the league makes money is entirely dependent on attendance and television ratings. Since money is all they care about, why not send them a message when they step out of line? Leagues are confident that they can get away with whatever they want because they know that no matter what, fans would always come back for more sports. So let's prove them wrong. Let's make the leagues earn their money for a change. The door has been opened, consciously or not, and now is a great opportunity to take advantage of it.

So thank you, John Scott. You were easily the most entertaining part of the All-Star Weekend, and that's significant. You've earned the spotlight.