INFJ Is The Rarest And Perhaps Most Fascinating Personality Type
Odyssey

INFJ Is The Rarest And Perhaps Most Fascinating Personality Type

An article for the dreamers and night-thinkers. 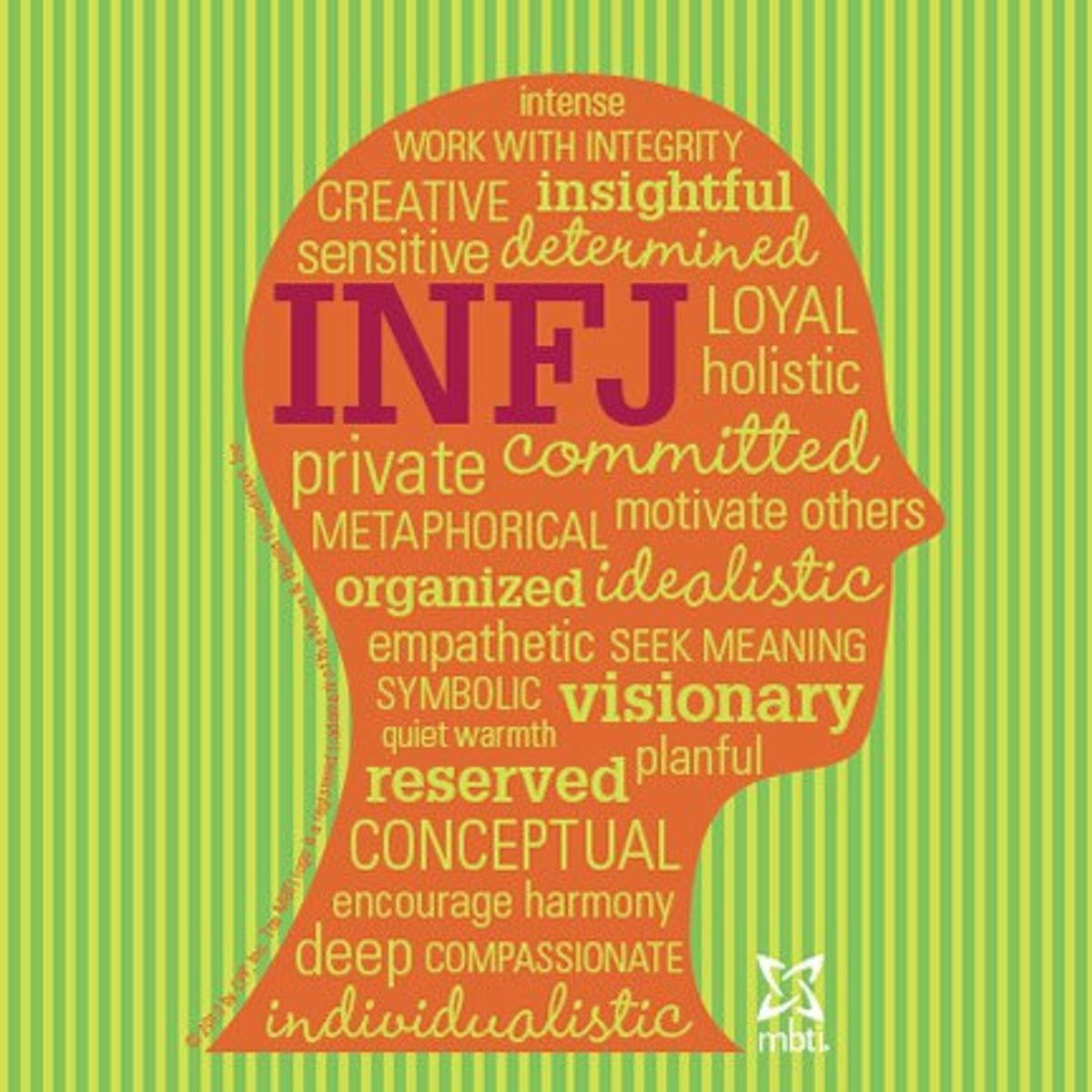 It was one of those 2 o'clock in the morning nights. The kind where you are tossing and turning and you almost wish those voices in your head could have the decency to take form as monsters or boogie men because at least then you could turn on the lights and they'd disappear. But, the mind is a persistent little thing, and it wanted me to stay up and play. So I fed my racing thoughts by Pinteresting. For those of you that don't know, Pinterest acts as a personalized Internet feed; you choose what categories you want to see and by liking or "pinning" content, you allow the site to learn your interests (hence the name Pinterest.) Eventually the feed can become so personalized that it looks like a little part of the internet was created just for you, because it was — through the pinning and viewing and clicking — you did most of the work and helped make your own feed. Anywho, I opened my Pinterest app and decided to casually scroll through. To be honest, I was thinking more about what I would make for breakfast in the morning and if my dog was actually comfortable sleeping upside down on my bony knees, than anything my glaring phone had to offer. But then something popped up that caught my eye:

And I felt connected to the quote, something worthy enough to debate about going on my quote wall. Last year I decided to designate one wall in my bedroom for all of my favorite quotes. I painted them, one by one, upon my graham cracker colored wall with use of various sized paint brushes to give a variety of letter sizes and shape. I have quotes such as Andy Warhol's, ''Don't think about making art, just get it done. Let everyone else decide if it's good or bad, whether they love it or hate it. While they are deciding, make even more art'' saying as well as Buddha's "The trouble is, you think you have time" mantra and even a quote my yoga teachers and I came up with, "The opposite of love is love." As soon as I saw Björk's simple but dense quote, "I am half child, half ancient," I felt a little jump in my heart and I instantly thought Maybe I can add this beautiful mixture of words to my wall! My wall is almost full, and I am very selective on what quotes I put up. So a new quote is a big deal for me because I'm constantly looking for new wall-quote-worthy contenders, but only a limited few make the cut. It's like American Idol and I'm Simon Cowell.


Björk's quote was easily a Hollywood-worthy quote and I kept on looking under the tags that went with Björk's six words and I saw, "INFJ personality" pop up again and again. INFJ? Where have I heard that before? It was 2:30 a.m. by now and I was asking my brain to remember this random four letter acronym. My mind surprisingly agreed to help me out, and brought me back to high school when my therapist and psychiatrist and school counselor all forced personality tests down my throat until I was blue in the face. And every time I resulted in the INFJ personality — Introversion, intuition, feeling, judging. I didn't pay much attention to it, until a couple nights ago on Pinterest when I discovered INFJs make up only one percent of the population, being the rarest personality type out of the 16 the Myers-Briggs Type Indicator has. This fact didn't fascinate me that much either, it was the quotes on Pinterest written by fellow INFJs that made me feel understood, at home, and it explained everything that I was as a person in a few "Pins."

The Myers Briggs Type Indicator (MBTI) is an introspective self-report questionnaire designed to indicate psychological preferences in how people perceive the world and make decisions. I like to view it as a psychological horoscope, but instead of predicting your future, it helps explain why you act a certain way.


INFJs are hard to condense but in short this comment under a Pin explains them well, "As the rarest type in the population, INFJs tend have very contradicting personality traits such as wanting to be noticed but hating attention, or having a logically oriented mindset but disregarding logic in situations where their intuition tells them something different. A difficulty many INFJs struggle with is balancing their contrasting personas. Highly perceptive of people’s feelings, INFJS are very attentive and empathetic listeners who enjoy helping others realize their potential." I felt like it spoke to me, I started searching INFJ all over Pinterest and found these quotes that made me feel content, and intrigued. It was the following 'Pins' that made me think that someone was reading my mind, making my thoughts visual and beautiful.


^This explains my social complex to the core.

Can I get an amen for this one below?

And this is spot on, with an added bonus for the cute drawing...


I've been reading a lot about my personality over the past day and it helps answer the questions I always asked myself. Why do I love being alone, but fear being lonely? Why do I feel everyone is worthy and lovable but yet I can claw your eyes out if you do one thing I deem "immoral"? It makes sense. INFJs are the most susceptible to mental disorders like depression because they are so deeply emotional — either all in or all out. INFJs are very intuitive, almost like mind readers, they understand almost too much of the world, both the good and bad. They are introverted people who want to be with people — well the right people. INFJs are just a big complexity, using both the right and left side of their brain equally, jumping back and forth from the creative side and analytical side with almost every thought. The students with the highest GPAs and who are most likely to graduate college are those who have the INFJ personality. These people are usually the outcasts, the quirky ones, the crazy dreamers but also the accomplished doers. INFJs are likable though, because they listen and understand and make great, loyal friends — but they also have a universe inside them that the other 99 percent aren't even close to comprehending. Some famous INFJs include Plato, Gandhi, George Harrison, Lady Gaga, and Oprah Winfrey to name a few.

As an INFJ myself, it's hard. I'm in a constant battle with myself, and trying to explain the thoughts that either bring me trouble, or leave others terribly confused. This helps explain my depression, anxiety, and bipolar. It makes sense why I chose to become a writer, and how I see the world.

Scrolling through Pinterest during the small hours of the morning usually leads to cute little dog pictures, gorgeous shoes I pin but can never afford, and DIY crafts that I have no intention of making. But this week, I found my Pinterest scroll worth while and eye-opening. It's great how technology nowadays can make the excluded feel included, and how it can help connect you to other people that are experiencing the same situations you face. I know it doesn't change much, I'm still the same person, but being able to see an outpour of other INFJs try to explain the same life I'm leading makes me feel a little less weird, kinda cool, and a lot understood. It's nice to understand yourself, and how your brain is wired. Take the test. It's fun and interesting to see what you are categorized as, or don't take it - that's fine too — I don't want to exclude anyone, it's not who I am. ;)