Should we all be connected telepathically? 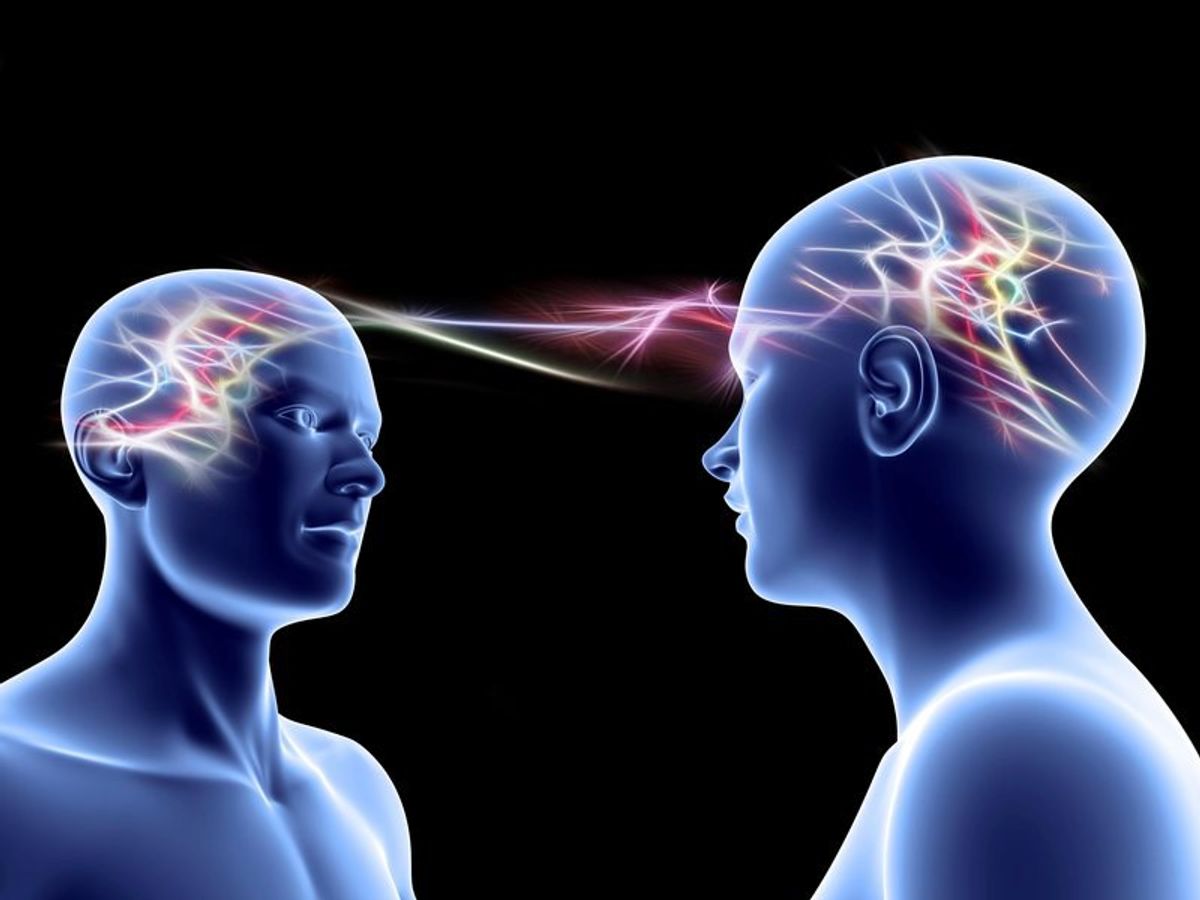 "Just look at humans. All that conflict. I wish they were more like organisms."

In science fiction, a "hive mind" is a single consciousness which lives in and controls multiple bodies. In real life, the term is also used to describe a "superorganism," when a group of organisms acts as a single social unit. Examples include bees in a hive, ants in a colony and you.

You are a hive mind like a swarm of bees, since your brain makes decisions based on a consensus of its parts. For example, if your brain was cut in half, each half would act like a different person —

only when they are connected do they act as a single unit.

Let's take this up a step. Another type of hive mind is becoming increasingly possible due to progress in developing technology integrated with the human body. What if humans formed a hive mind by connecting all of our minds together? What if all thoughts and experiences were shared?

Recent research has made direct brain-to-brain communication over the internet possible, but the technology is in very early stages. Linking all minds to share all thoughts and experiences would require technology that is not yet realistically possible. But let's assume that it will eventually be possible, in order to discuss its benefits and drawbacks.

Here's an idea to consider as a starting point: the creation of a human hive mind could be an unprecedented step forward in communication and education. More than that, it could be the solution to most, if not all, interpersonal problems.

Compare a human's approach to learning with a computer's. Once a computer learns how to perform a task when someone creates a program, any other computer can in principle download that program and "learn" the exact same "skill" immediately. Computers would be nearly useless if they needed someone to write a new program, but people must learn almost everything themselves.

The main problem with that reasoning, though, is the phrase "usually." Over-communication can be as socially harmful as under-communication. Maximized communication means that no one could keep secrets, so everyone would know that which you would prefer them not to — including embarrassing memories and negative thoughts about others.

Arguably, if all thoughts are shared, then it is extremely unlikely for any individual person to be judged or criticized. That would minimize the problem of embarrassing secrets, but leads right into another notable drawback — if all thoughts and experiences are shared between people, then there would be no more individual identities. Anyone would have access to memories previously considered personal, and no one would have a unique memory or experience.

Another potential drawback is that closer connection between people could increase vulnerability to strong emotional reactions. One can imagine terrorism becoming much more effective when striking fear into one person can strike fear into every person. To be fair, that scenario does assume that there would be people outside of the hive mind who would fight against it. However, that line of thinking brings us to the elephant in the room — realism: is it really plausible to connect everyone to a single mental network?

Alright, so a full-on hive mind may be a bad idea. But we should not throw direct mind-to-mind communication technology out the window. Voluntary direct communication between brains, a kind of technological telepathy would be much less radical and conveniently dodge all of those objections. Imagine it as a more convenient, effective, and intimate version of a cell phone.

As long as telepathy technology can make the sending and receiving of thoughts voluntary, its benefits can outweigh its drawbacks. Communication would be faster and easier, but still filtered for social reasons. People could understand each other without fusing their identities. Some memories could be made public for download, while others are kept private at each person's discretion. Miscommunication could be reduced while individual choice and identity are preserved.

Ultimately, it is up to future generations to decide how they would want to use a technology that allows such a close connection between minds.

Gizmodo: "How Much Longer Until Humanity Becomes A Hive Mind?"

ExtremeTech: "In the future, will we all be linked telepathically?"

The Guardian: "Mind reading may one day be possible, researchers say"