How Hillary Clinton And The Democrats Are Like The Atlanta Falcons

Sadly, Hillary, like the Atlanta Falcons played not to lose instead of playing to win and America lost as a result. 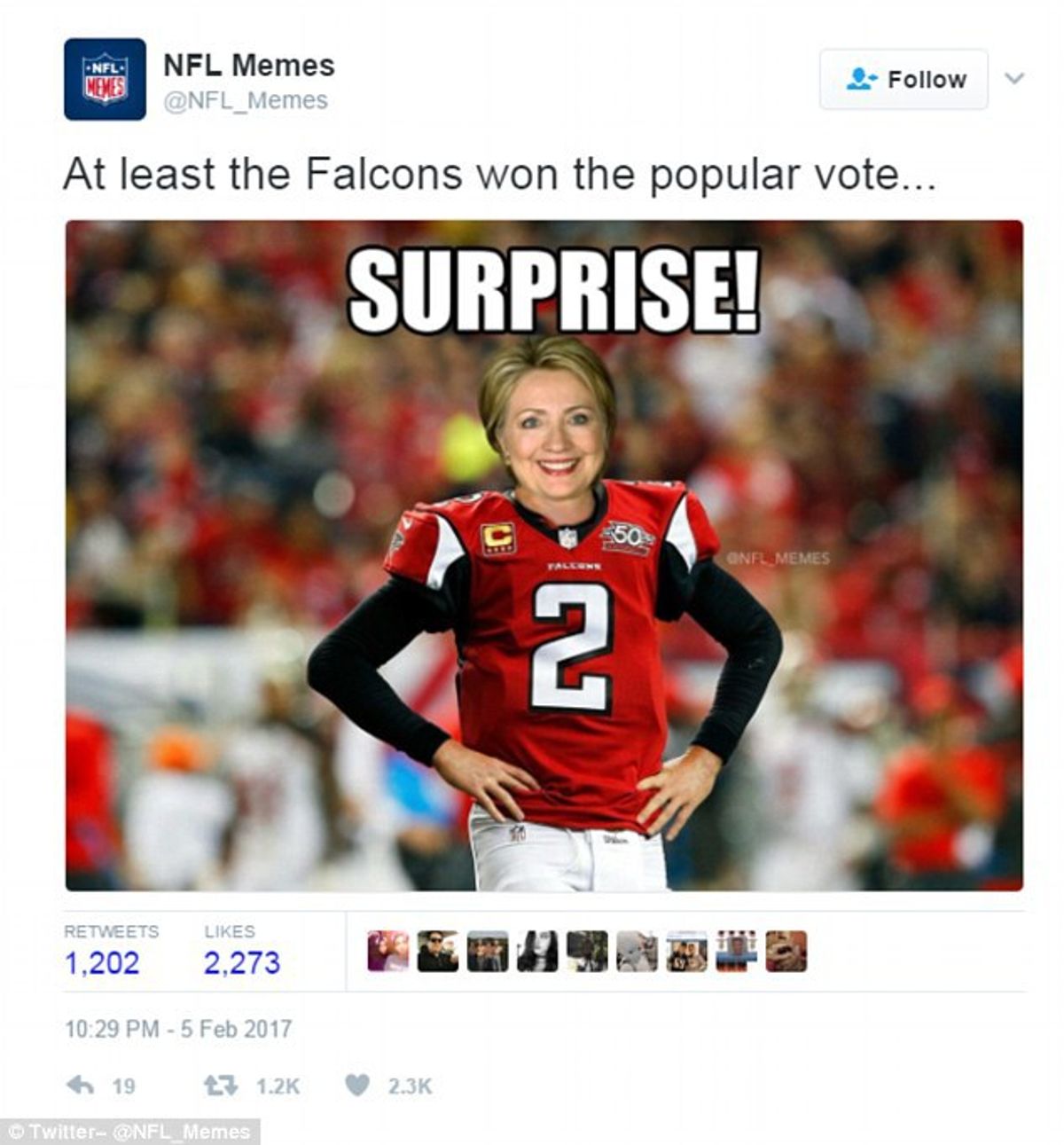 Whether you like football or follow sports at all, unless you live under a rock, you know the New England Patriots won the Super Bowl in dramatic fashion over the Atlanta Falcons 34-28 in the first overtime game ever in Super Bowl history. Before I continue, I want to first say congratulations to the England Patriots, their fans, Bill Belichick, and Tom Brady who I said is the greatest quarterback of all time even if the Patriots got blown out yesterday. The Super Bowl wouldn’t have changed my mind in any way, but I’m sure the game essentially solidified in most people’s mind that Tom Brady is, in fact, the greatest QB ever. I used to write sports articles in the past, and anyone who has read any of them knows that I this is what I thought about Tom Brady, and the game no matter the outcome would not have changed my opinion of him.

Now back to the point. As amazing as Tom Brady and the New England Patriots were, we have to acknowledge the fact that the Atlanta Falcons blew a huge, seemingly insurmountable 25-point lead. Does that not sound familiar? If you are an avid Hillary supporter, or if you tepidly followed her throughout her political career, you should know where I am going with this. If not, please stay tuned.

Hillary Clinton whether it was her senate race against Rick Lazio where she had a large lead and barely held on to win, her primary loss to a black guy with a Muslim name that nobody heard of Barack Hussein Obama, her barely beating Bernie Sanders who is an 873 year old Jewish, socialist with bad posture, is always grumpy and always yelling, in the primaries, or losing to Presidency to an orange, fascist, admitted sexual predator Donald Trump, Hillary Clinton like the Atlanta Falcons is unable to hold a large lead. The Atlanta Falcons held a 25-point lead over the New England Patriots at one point when they lead the New England Patriots 28-3. Here’s why that’s significant, the largest lead ever overcome in Super Bowl history was a 10-point lead which has happened multiple times. The Falcons after leading 28-3 lost the Super Bowl 34-28.

Now when you look at Hillary Clinton, she blew a 25-point lead opening lead to Barack Obama and lost the primaries to him in 2008. There it is, that allow draws eerie parallels. I can end the article right there but it's better to continue to explain why she's so horrible. She blew nearly blew a 60-point lead to Bernie Sander and barely held on to win by 6 points despite the DNC biasing the primaries in her favor. Worst of all, she blew a 19 point opening lead to the annoying orange in the General Election. Donald Trump was the most unpopular candidate in presidential election history. Just like the Atlanta Falcons, the Hillary Clinton lost in the most impossible way possible.

The problem with the Falcons and the Democrats/Hillary Clinton is that they both had a large and seemingly insurmountable lead. Instead of playing to win the game, the Atlanta Falcon became conservative and played the game not to lose. Hillary Clinton and the democrats did the exact same thing. The democrats thought they could not lose because the orange spray tan gone wrong was so horrible they and had an insurmountable lead. They played not to lose with Hillary instead of nominating the best candidate (Bernie Sanders) to win the election. Most football fans hate the Patriots just like most Americans hate the Republicans and Donald Trump who is the most unpopular President in American history. Hillary, like the Atlanta Falcons, knew what it took to win. Instead of doing what it took to win, both were content with more people wanting them to win. Sadly, due to a horrible game plan from both, America lost as a result and like the Atlanta Falcons, Hillary will never reach the pinnacle. You both had your chances, and you blew it.

Actually, this article is very disrespectful, I apologize to you Atlanta Falcons fans. Falcons fans didn't go around calling their fans sexist, racist, Bernie bros, the alt-left, idiots, basement dwellers, and blamed Russia for hacking the game. The Falcons and their fans handled the loss with dignity... Only if that could be said about Hillary and her supporters. I'm sure the Falcons won't be as disrespectful to their fans by attending the Patriots Super Bowl parade) like Hillary attended Donald Trump's parade, who admitted to being a sexual predator instead of the Women's Marches. Hillary's slogan throughout the Primaries and General Election was "I'm with her." I have yet to see her there with you since she lost to the Republican's new daddy, Donald "Tiny Hands" Trump.

I guess that means you were supposed to be with "her" as in Hillary, it never meant that she was with you. This election revealed Hillary's true colors, what any person with sense could have seen from a mile away. We will see what kind of character the Falcons have next season by how they respond to adversity. As for Hillary, we know her character is well... SHIT. But she doesn't care. She has Universal Healthcare to heal her broken heart just like every member of congress has lifetime Universal Healthcare. But if you have cancer, she has no problem saying to you, single-payer Universal Healthcare "WILL NEVER EVER COME TO PASS."

If you like my articles, you will love my podcast. This month, I will be talking about America’s War on Brown people. When I say Brown people, I am talking about Black people, Natives, Muslims and all other shades of Browns. I will be publishing it on my YouTube channel and here on The Odyssey Online. If you would like to subscribe to my YouTube channel, click here. Next month, I will be talking about America’s War on Women. If you would like for me to interview you, please email me at millerdiandre@gmail.com or message me on Facebook or Twitter. Until then, enjoy the memes: