Things You Hear When You Go To SUNY Oswego's Whiteout
Odyssey
CurrentlySwoonLifestyleHealth & WellnessStudent LifeContent InspirationEntertainmentPolitics and ActivismSportsAdulting
About usAdvertiseTermsPrivacyDMCAContact us
® 2023 ODYSSEY
Welcome back
Sign in to comment to your favorite stories, participate in your community and interact with your friends
or
LOG IN WITH FACEBOOK
No account? Create one
Start writing a post
Sports

Things You Hear When You Go To SUNY Oswego's Whiteout 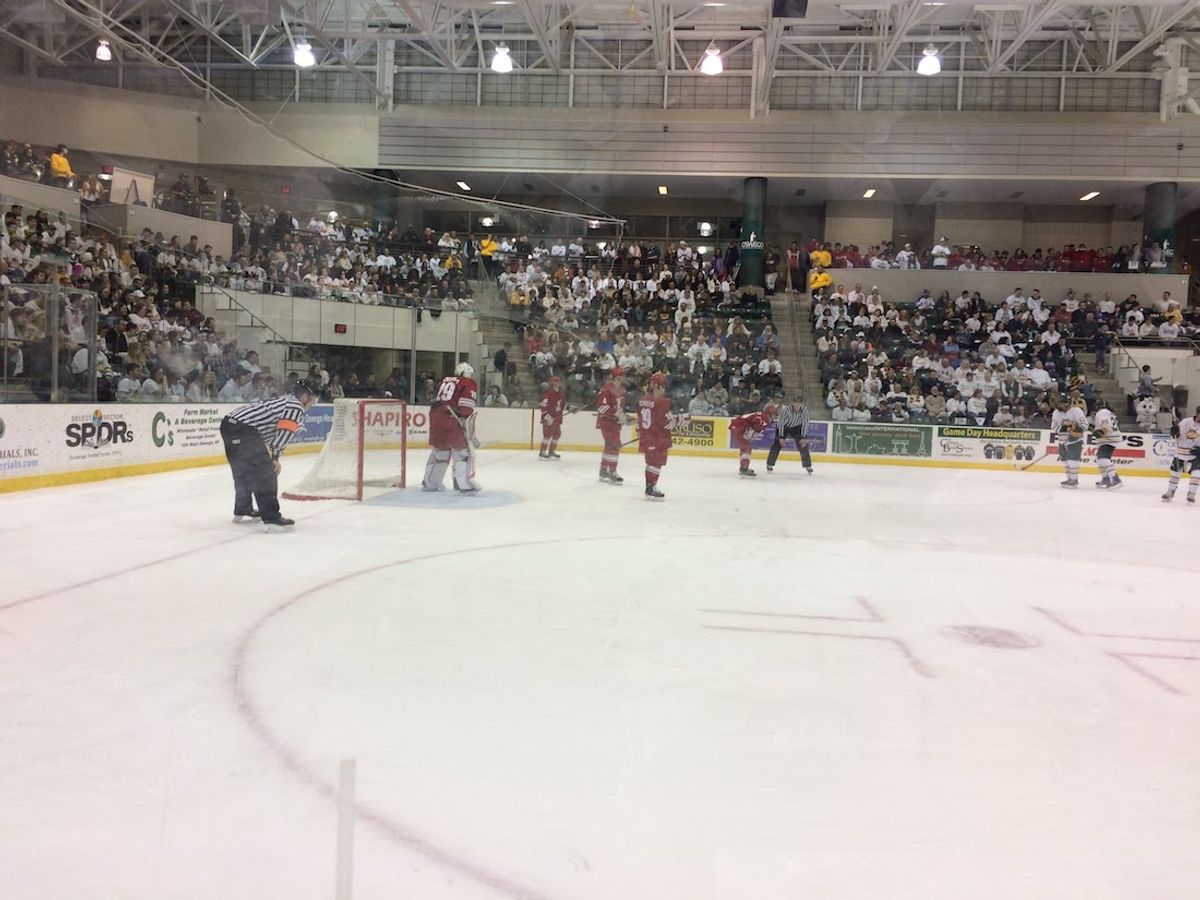 Whiteout is the biggest hockey game of the season, therefore everyone who is anyone goes to this game. It does not matter if you have been a fan all year or if you are just going to go, you will have to realize that this is no rookie game. This season, most people waited in line for 2 plus hours just for tickets to this largely known event. If you think going at 11:30 on the prior Sunday is the correct time to go, you are wrong, the box office opens at noon.

This is typically said when people first enter the stadium line on the day of Whiteout. How long that statement lasts is related to how long the fan has to wait in line. The game begins at 7 pm, but the line is not allowed to form until 2 pm. My friends and I got to the Marano Campus Center at 1 pm and waited in line for 6 hours, yes, 6. When we first got there we were excited but knew this was going to be a long experience for the seats we wanted, so we planned ahead and brought a backpack full of things to do. Also this is usually said when people have pregamed and then attend the game, even if we are losing i am sure they would be saying that.

Yeah, you will probably hear this the most out of everything mentioned in this article. Plattsburgh is our biggest rival (if you want to read more about that read it here) and that is who we always play for Whiteout. So it is kind of a big deal to be playing them at home. There is no student section comparable to Oswego’s, we are loud, proud and not afraid of anyone. It also has to do with the time of the season this game is played, it always occurs close to the end of the season. This year Whiteout was the last game of the season before playoffs, so there is a lot at stake in this game.

This was what everyone heard me saying all game. The night before, our team had our first SUNYAC defeat against SUNY Potsdam, and even though it had been 24 hours, I was still mad. The game all in all was very interesting. Because of the obvious tension between the two teams, the Lakers were playing better than they had the night before, but Plattsburgh was definitely guarding them closer than they needed to (but I am also a bias source).

I mean it is not Plattsburgh’s fault that some of our best players were hurt, but it was their fault that Cameron Berry was out part of the first period. We are just all frustrated because of the amount of failure we feel when we do not hear the infamous song that we all dance to when goals are made (listen to it here).

I am sure from the last two numbers you are aware of the outcome of the game. Yes, we once again, unfortunately, lost to Plattsburgh. It was not such a great day to be a Laker, but hey, we are still number one in the division!