It won't make you "endearing" or "special". Having a mental illness is a struggle that shouldn't be taken lightly. 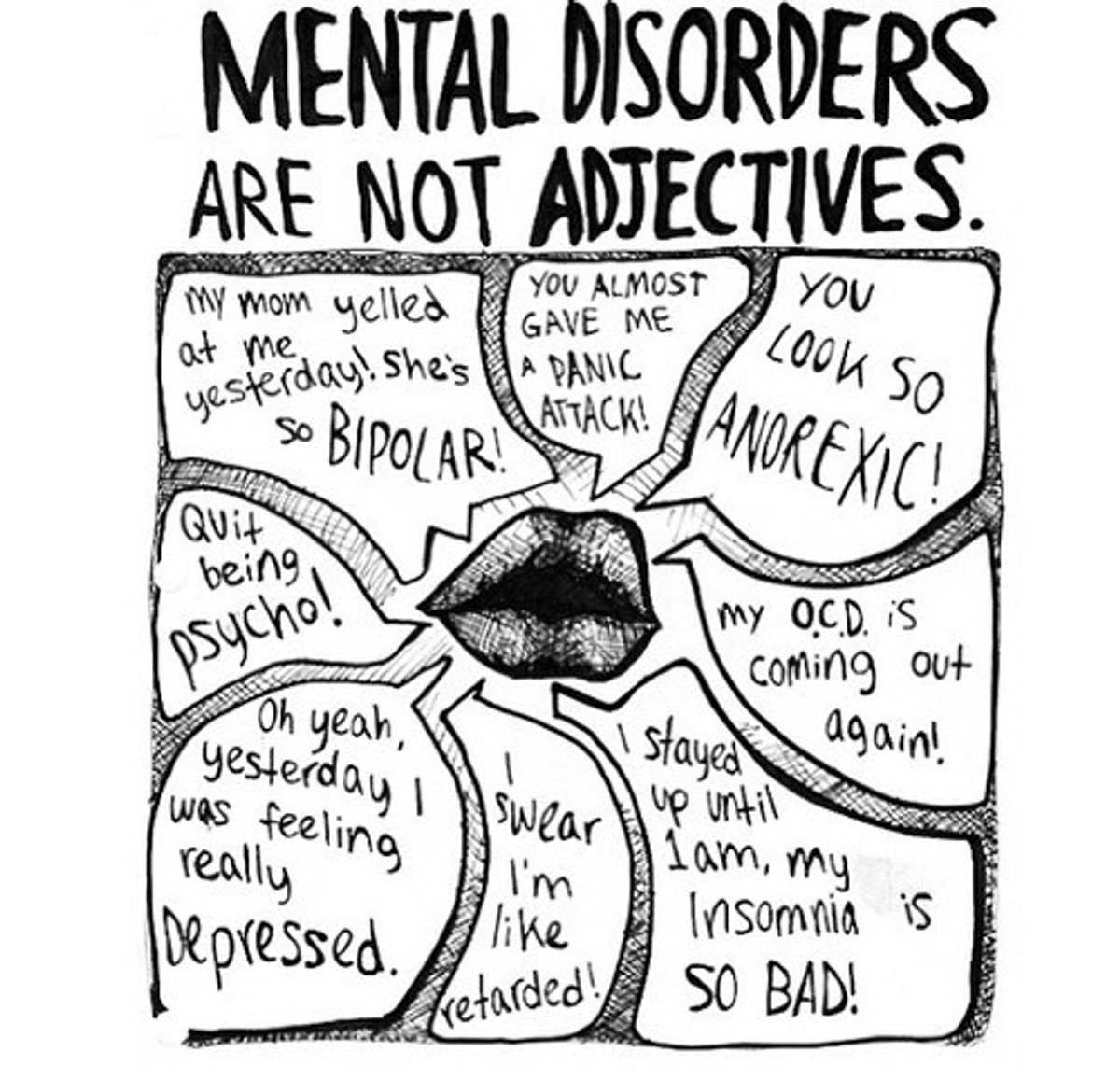 We hear these things almost every single day . . .
"You're so moody today. Would you stop being so bi-polar?"
"I'm so depressed, man."
"I just cleaned the kitchen again. I'm so OCD!"
"I talk to myself a lot. I swear I'm schizophrenic. It's kind of funny."

We hear these statement daily, and there is more where it comes from. Because people say it so much, we have become overall immune to understanding it's actual seriousness. Someone might say "I am so bi-polar today" without even thinking about what might mean to the next person. Or another individual could say something along the lines of "I cleaned my bathroom again, talk about Obsessive Compulsive!" and the listener wouldn't think too much about it. For each person, it's different. One might not even hear the comment because we're so used to it, but another might take offense to it because they are part of the population who is battling that specific mental disorder.

I personally believe that mental disorders should not be taken lightly, and frankly, I don't understand why people have morphed these serious illnesses into everyday language - just something to add for "humorous" effect, or for additional description. But that doesn't matter at all. There are other ways to describe how you are feeling, or what you're like without using something that is actually hurting people each day behind closed doors. They're battling depression, bi-polar disorder, generalized anxiety disorder, and schizophrenia and you're simply saying that you "must have OCD" because you scrubbed your bathroom toilet for the third time this week? I know it seems as thought I'm getting defensive, but this hardly recognizable issue has been going on for awhile now, and it's only been looked at insensitively. I feel as though most people still think that physical illnesses and diseases such as lung cancer, or having heart issues is more important of an issue than having severe depression. But that is false. Both hurt. Both are hard to cope with, and each day can be equally debilitating. Just because you can't see the depression physically all the time does not mean that they aren't dealing with their own traumas.

Bipolar Disorderis a brain disorder that causes a lot of shifts in moods - from extremely elated and full of energy, to the very lowest of lows in depression. Symptoms of mania or manic episodes include an overly long period of feeling "high" of an overly happy and outgoing mood. Another example of mania is extreme irritability. People with bipolar disorder who experience episodes of mania are usual fast talkers, have racing, creative thoughts (usually stay up late, insomnia, finishing projects at rapid rate) behave compulsively, usually with spending an excessive amount of money or making poor decisions to get a thrill or a rush, and sleeping too little or too much. After this subsides, people with bipolar disorder are hit with an extreme low, resulting in severe depression. They end up feeling "slowed down", they are extremely irritated, have issues making decisions, they can be restless, or they can end up thinking about suicide and death - or attempting suicide.

Still think it's "cute" to claim these disorders, or talk about them in an insensitive light?

Obsessive Compulsive Disorder involves a lot of unwanted, disturbing, and intrusive thoughts usually brought on by triggers. It can also be accompanied by urges - or compulsions - that intrude into the person's mind which causes extreme anxiety and discomfort. This results in repetitive rituals and behaviors to decrease the anxiety, but someone only makes it subside for a little bit before the anxiety and compulsions return. I can resonate with this a lot because I have Obsessive Compulsive Disorder. Examples of OCD symptoms are when people need to wash their hands an excessive amount each day, and the exact times. If someone says something and it doesn't sound "right" to the person with OCD, then they have to add something to it to make it sound better. An example is when someone says "Cake", and the person with OCD finds the "k" sound at the end of "Cake" to be disturbing and uncomfortable. Therefore, they quickly add an "s" sound at the end of each "k" sounding words. A few obsession are fear of contamination, symmetry and exactness, accident harm to self or others, and unwanted/forbidden thoughts. And if each of these rituals aren't done in a timely matter for the person, it results in them having panic attacks, depression, and major anxiety. Compulsions include constant toilet wiping and cleaning, hand washing, showering rituals, counting, ordering, mental, tapping, touching and rubbing rituals.

Schizophrenia is looked upon greatly as being the "crazy" illness. However, it's a chronic and severe disorder that has effect A LOT of people in history. People who have this illness may hear voices that other people do not hear. They tend to believe that other people are reading their minds, and that they are plotting against them, planing to hurt them or harm them. Symptoms of schizophrenia are hallucinations, delusions, thought disorders, speaking little - even when forced to interact, trouble focusing or paying attention, and not making sense when they talk. I've met someone who had severe schizophrenia, and I could see the changes in them from when they were in a good mood, to when it was a bad day. They would get very aggressive and snappy if they were in a energetic mood, and when they were sad or angry - they were quiet for the most part, and irritable the next. This person who tell me about the voices that they would hear, and whether or not they were quieter that day. It was truly interesting, but I couldn't begin to imagine living a life with that much stress and debilitation.

Borderline Personality Disorder is a disorder that I've known a few people to have. It is a serious mental illness that causes unstable moods, behavior, and relationships. A signature trait of having Borderline Personality Disorder is when the patient pushes someone away, but wants them to not leave them at the same time. They have problems regulating their emotions and thoughts, which causes them to lose train of thought and organization. They are impulsive and they sometimes demonstrate reckless behavior. Being in a relationship with someone who has BPD can be a struggle, because they have constant mood changes, and they can't really control what is going on in their minds, or what they want. Other symptoms include fear of abandonment, unstable or changing relationships, suicidal behavior or self-injury, varied or random mood swings, feelings of worthlessness or sadness, stress-related paranoia, loss of contact with reality as well has being more prone to starting fights - physical or verbal.