Here's to all the bittersweetness that lies in the aftermath of losing an animal. 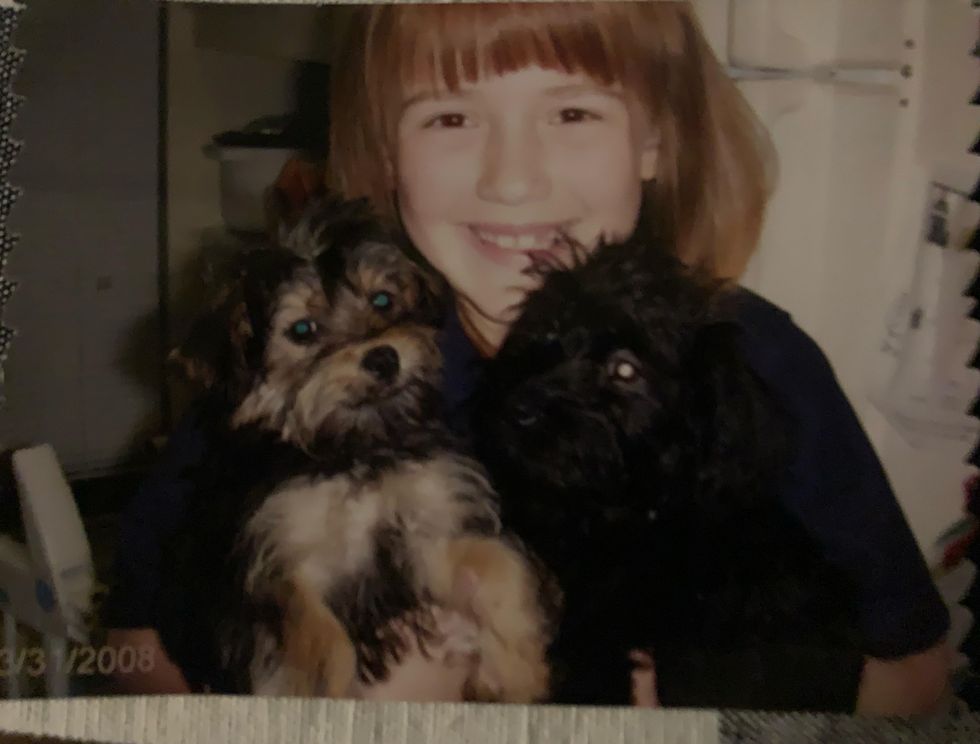 When I was 7 years old, my family was expanded by 2 when my two dogs, Romo and Otis, came into our lives. They were a little bigger than a can of soda, and from the moment I saw them they stole my heart. They were brothers from the same litter of Yorkipoo puppies, but they couldn't have been any more different.

Romo (yes, like the Dallas Cowboys quarterback Tony Romo) was the rambunctious one. I remember holding him before we brought them home, and he was squirming so much I was afraid I would drop him, and he'd run away.

I taught him how to sit, play fetch, and I would encourage him to jump up on my bed against my mother's wishes. Romo ran faster than a bullet, and we affectionately referred to him as a rabbit because he could jump higher than any dog I'd ever seen. He had a mixture of tan and black in his fur, and he followed me around like a shadow. Romo was always way too eager on a leash, but he was the friendliest dog you would meet.

One of my favorite memories of Romo was the first day he ever swam in our pool. We had to practically drag him out because we were afraid he'd swim so much to the point his heart would give out. Romo was a bundle of lovable energy and there was never a dull moment with him around.

Otis on the other hand was a quiet soul. He contrasted his brother in almost every single way. Where Romo was energetic, Otis was calm, cool, and collected. While Romo was running along our fence with the neighbor's dog on the other side, Otis was exploring the bushes and sniffing around the trees in our backyard. While I was carrying Romo to the car after getting him, I got so afraid that I would drop Romo, I traded with my dad and held Otis instead. He was a small, shivering little puppy and all I wanted to do was cuddle him and let him know he was safe. Otis was all black with a curly head of fur, and it was obvious that he got more of the "poo" than the Yorkie.

Otis didn't understand the concept of fetch. In fact, every time Romo would have a toy and play with it, Otis was right there plotting to steal it. When he succeeded at thievery, Otis would parade around his trophy and seemed to shove it right in his brother's face- typical sibling behavior ... even in dogs.

Otis was the best at cuddling. Romo never really sat still long enough to relax, but Otis would sleep soundly on my lap for as long as I would let him.

Romo and Otis made the perfect pair and I loved getting to grow up alongside them. It broke my heart to leave them when I went off to college, but getting to come home and be greeted by their wagging tails and sweet puppy kisses made it all worth it.

Romo died on Thanksgiving in 2019.

It was unexpected, and I cried for weeks. The next couple of visits home were always accompanied by tears and the pain of knowing one of my best friends in the world was not with me anymore.

But at least I still had Otis.

Otis ended up becoming diabetic, and that eventually made him develop cataracts and lose his sight. While this was sometimes a challenge as we had to make sure to feed him and give him insulin at the same time twice a day, he still was able to show the same love and affection as when he was a puppy. While he would clumsily find his way around our house, one of the only rooms he could always find was my bedroom. Without a doubt, he would be lying on the floor next to my bed, as if he was waiting for me to come in there.

This past Monday, about a week after going home and seeing him, I got the call that he had passed away in his sleep.

This time, I had been mentally and emotionally prepared- he was 13 years old, and there was only so much more life he had left.

But it still hurts just as much.

It feels weird to know that I no longer have a dog waiting for me when I come home. Honestly, I'm dreading walking in and seeing his spot on the couch not have his normal pillow and blankets with Otis snoozing quietly among them.

As I'm writing this article, I am reminiscing on all of the wonderful memories that both Romo and Otis have given me. I look back at all of the photos and videos throughout my time with them, and I can't help but smile (and also cry).

The best and worst part of owning a pet is the knowledge that they will eventually have to leave this Earth without you. On the other hand, it's a beautiful thing to know that they went their whole life loving you and that you were their sole reason for waking up every day.

I can't speak for the owners of cats, birds, lizards, pigs, etc., but I know that I wouldn't take back any of it just so I wouldn't know the pain of losing Romo and Otis.

Yes, the days I lost them will probably be one of the worst days of my life, but my days with them will go down as being the most joyful and fulfilling parts of my childhood.

I love you, Romo and Otis. Thank you for everything.