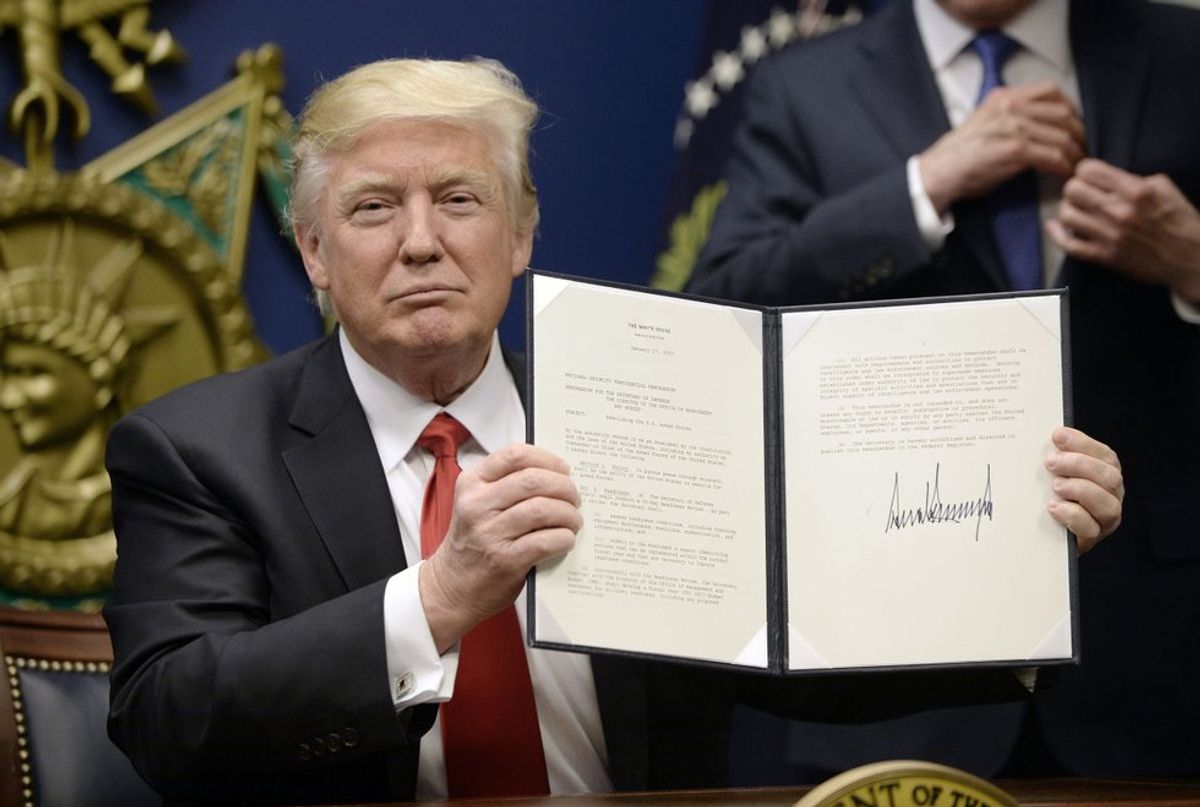 Federal Judge James Robart, an appointee of former president George W. Bush, halted the enforcement of Trump’s Muslim ban yesterday, suspending the controversial order nationwide. The White House has vowed to appeal the decision posthaste. Robart ruled in favor of Washington Attorney General Bob Ferguson, who said following the ruling, “The Constitution prevailed today. No one is above the law – not even the president.”

Trump administered his executive order on Friday, January 27th, issuing a 90 day ban on citizens from seven Muslim majority countries. Citizens legally traveling to the U.S. from Iran, Iraq, Libya, Somalia, Sudan, Syria, and Yemen have been barred from entering the country, detained, and deported. The executive order also suspends all refugees from entering the country for 120 days, while Syrian refugees are barred indefinitely.

Homeland Security has complied with Robart’s order, suspending all enforcement of the Muslim band signed by the president. Immigrants will be allowed to enter the U.S. and some 60,000 revoked visas will be reinstated. Unfortunately, those who had their visas stamped or taken away must reapply, a process that is tedious, lengthy, and shrouded in red tape.

The suspension came just eight days after president Donald Trump signed the executive order which prompted protests to erupt all over the country, and several states and civil rights organizations to file lawsuits. Trump has responded to the ruling in his typical style, issuing a Tweet referring to Robart as a “so-called” judge and deeming the suspension “ridiculous.” The White House issued a statement saying the Justice Department would enforce an emergency stay of the executive order “at the earliest time possible.”

Protests erupted across the nation in response to Trump's unconstitutional order

Shortly after the executive order was first issued, federal judges in New York, Massachusetts, Virginia, and Washington pushed back, enforcing a stay on the implementation of the ban until further notice. However, rogue customs agents ignored these orders and continued to enforce Trump’s unconstitutional ban on incoming Muslims who are otherwise authorized to enter the country.

“Rogue Customs and Border Patrol agents continue to try to get people onto planes,” Becca Heller, director of the International Refugee Assistance Project, told reporters on January 29th, two days after the executive order was issued. “A lot of people have been handcuffed, a lot of people who don’t speak English are being coerced into taking involuntary departures.

Several reports have been made that Customs and Border Patrol agents at Dulles International Airport were blocking those detained under Trump’s ban from speaking to lawyers, a direct violation of due process.

Senate Minority Leader Chuck Schumer said in a statement, “The president’s attack on Judge James Robart, a Bush appointee who passed with 99 votes, shows a disdain for an independent judiciary that doesn’t always bend to his wishes and a continued lack of respect for the Constitution, making it more important that the Supreme Court serve as an independent check on the administration.”

The blatant refusal to respect the order of the Judiciary is in direct conflict with the system of checks and balances that our country has employed. If the Executive branch can ignore the wishes of the Judiciary, we as a nation have a full on constitutional crisis on our hands, according to Ari Ezra Waldman, director of the Innovation Center for Law and Technology at New York Law School.

Should the Executive renege on their promise to respect the wishes of the Judiciary, a judge could be forced to call the U.S. Marshals in to enforce the order, possibly pitting U.S. Marshals against armed CBP agents at airports. “This,” Waldman, wrote, “is what sets us up for a darker, dangerous turn.”

Whether the Executive branch will continue to comply with the Judiciary remains to be seen, but what is evident now more than ever is the audible contempt that Trump holds for anyone who disagrees with his desires. It is also clear that whatever dictatorial power Trump believed he would attain as president will be continually contested by those who believe that our nation’s laws are meant to protect all its residents.