The Facts About Late-Term Abortions 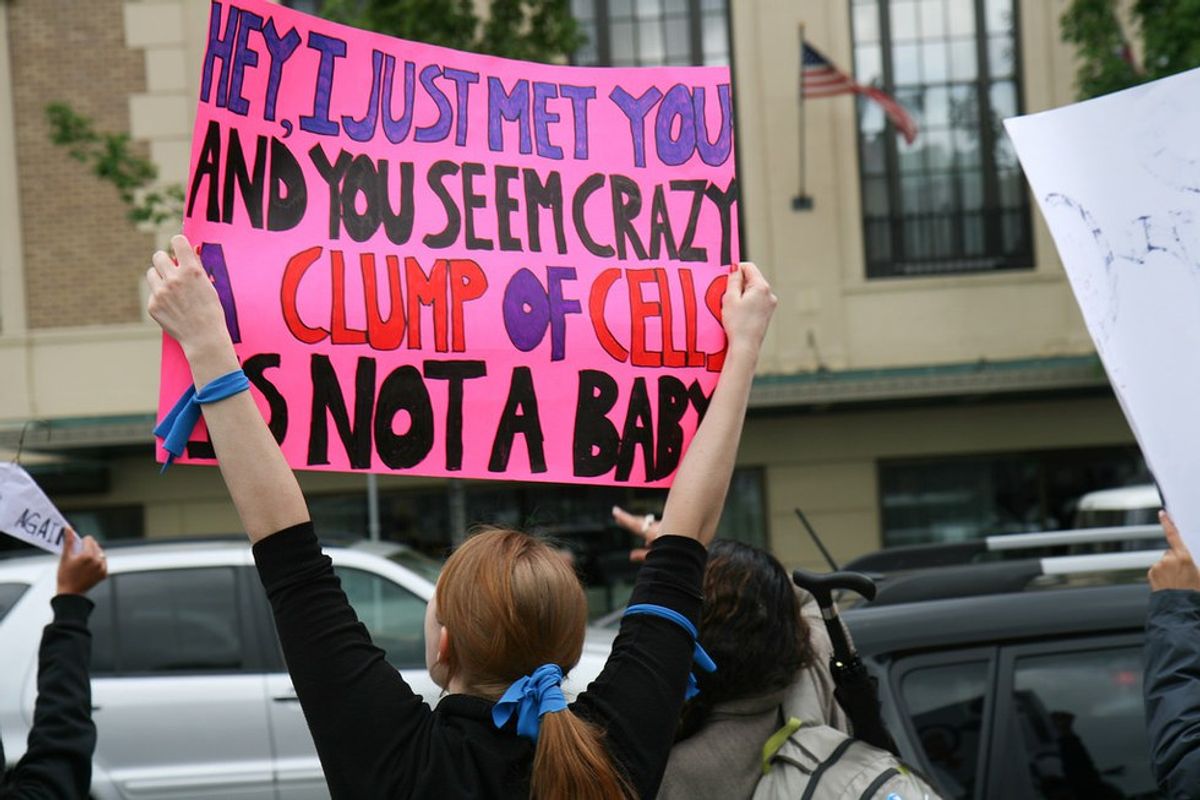 Isn’t it fascinating that Republicans so desperately want a smaller government, yet at the same time they want the government to have full control over women’s bodies? Headlines were made after a bill was introduced in Ohio that would ban abortions after the first detection of a fetal heartbeat. While Gov. John Kasich (R) vetoed this bill, he did sign a second that bans abortions after 20 weeks. This ban does not make exceptions for rape or incest. While the 20 week ban may seem more reasonable than the heartbeat bill, it is still cruel and just as restrictive. Why should a cisgender man with no medical knowledge be allowed to make decisions about women’s bodies?

To have an abortion is a choice that should be kept between a woman and her physician. Despite this, even with the passage of Roe v. Wade, states are still allowed to impose restrictions on abortions. Currently, 41 states have gestational limits, or abortion restraints based on the age of the pregnancy. The most common limitation is on having the procedure after 20 weeks or 24 weeks, depending on the state’s definition of a late-term abortion. However, only one percent of abortions are actually performed during this time; most occur within the first trimester. Therefore, why is there such a push for heavy regulation of late-term abortions if they occur so rarely?

Some people believe in the cultural myth that abortions, including late-term abortions, are used by pregnant people like birth control. This assumption is very illogical, considering that without insurance coverage, abortions are expensive procedures. Late-term abortions usually have an even higher price. According to Planned Parenthood, the average abortion pill costs about 800 dollars. Because the prices rise with the age of the pregnancy, late-term abortions can be as expensive as 2,000 dollars. These costs, as well as the state-imposed constraints, can make it very difficult to obtain any abortions at all, especially for low-income women. Therefore, it makes zero sense that abortions would be a viable form of birth control.

Others might think it is more humane to not allow abortions after 20 weeks. After all, during the 20th week the fetus gains higher cortical functioning due to the formation of the thalamus, and during week 25 the fetus’s brain activity begins to exhibit regular wave patterns; this is based on the medical definition of death, when electroencephalography (which demonstrates regular wave patterns) activity ceases. What these people don’t understand is that late-term abortions are not a simple matter of whether the pregnant person wants to keep the baby or not; these pregnancies are usually very wanted. Rather, these particular abortions are literally a matter of life and death for the mother and/or the fetus.

These abortions are usually performed in cases when the mother’s health and life are threatened by carrying to full term, or if the fetus is not viable, such as if it has already died in the womb or will live for only a few days after birth. Most birth defects, such as complications from the Zika virus, are also not detected until about 20 weeks into the pregnancy, which can leave the mother with a very difficult decision, especially if these defects will give the baby a very brief and painful lifespan. Moreover, 25 percent of women who get abortions are victims of domestic violence. In the case of late-term abortions, there are situations when the partner may become abusive during the pregnancy; the pregnant person might want an abortion to protect themselves from being even more closely linked to the abuser and to spare the fetus of future abuse.

Moreover, many people, such as Donald Trump, have major misconceptions about abortion procedures and think that they can be performed in the ninth month right when the baby is ready to be born. What this actually describes is the process of a cesarean section, which is not a form of abortion; it’s a form of birth. The most common procedure in a late-term abortion is actually the dilation and evacuation method. Osmotic dilators and/or misoprostol are used to soften and dilate the cervix to the necessary width, and then the doctor removes the fetus and placenta with vacuum aspiration, forceps, and a curette. An alternative procedure is the induction abortion, which uses drugs to induce labor. This process is usually chosen by people seeking abortions in the first trimester, though some women choose it in the second or third trimesters if they want to hold the fetus and say goodbye.

There are some individuals who argue that states with very few abortion restrictions, like New Mexico, can allow a situation where the abortion is performed during the 39th or 40th week. However, this is not exactly a fair example considering that only four residents of New Mexico had 28-week abortions in 2014; this number dropped to two in 2015. Moreover, because of the lax limitations, the abortion rate is New Mexico has actually dropped by 24 percent since 2010. The only rise has been in women coming from neighboring states with very restrictive laws to have abortions in New Mexico.

Unfortunately, the stigma that comes with abortions, especially late-term abortions, has caused a shortage of doctors willing to perform the procedure out of fear of violence from “pro-life” groups. In 2010, Dr. George Tiller, a late-term abortion provider, was murdered by anti-choice extremists who for years had harassed his clinic. Dr. Leroy Carhart, who is based outside of Washington D.C., has also experienced extreme harassment and attacks from anti-choice groups both online and in real life; in 1991, they even burned down his farm in Nebraska, which killed many of his animals. So much for being “pro-life.”

Moreover, Trump’s anti-choice rhetoric and ignorant statements about late-term abortion procedures only help fuel the fire that incites violence against abortion providers and the people seeking abortions. This election and Trump’s views only maintain that many conservatives only want a smaller government in terms of economics; with issues like restricting reproductive rights, they want a totalitarian regime. Because of his win, states like Ohio are given the message that abortion bans, even outrageous ones like the heartbeat bill, are perfectly reasonable. With Roe v. Wade’s position now made unstable with a Trump presidency, it is uncertain how much bodily autonomy anyone with a uterus will be able to maintain.
Report this Content
This article has not been reviewed by Odyssey HQ and solely reflects the ideas and opinions of the creator.

Nicole Marie Nigro
Individual Creator
205
c1.staticflickr.com
Where to start...... Let me start with the cliche that life throws us curveballs and what we do with it is what counts.