The Election Reeks of Sexism, and We Need to Talk About It
Odyssey

The Election Reeks of Sexism, and We Need to Talk About It

We constantly ask ourselves why Hillary is unlikable – and yet the answer is right in front of us. 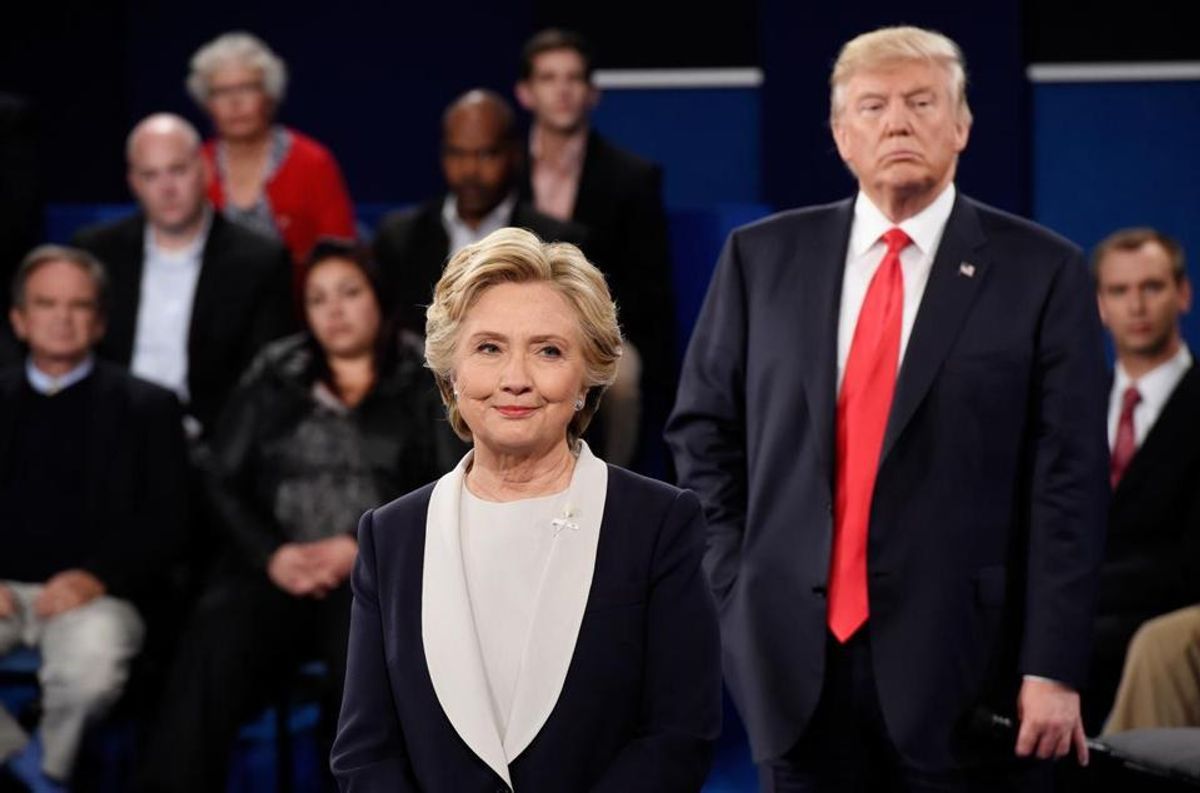 Just when you thought it couldn’t get any worse, the 2016 election did exactly that. Just when you thought that Donald Trump’s comments toward women couldn’t become more appalling, he proved us wrong. And just when we thought that maybe, just maybe, the debates would act as a leveraging tool, revealing to us the more prepared, more insightful, and more politically capable candidate, they instead functioned as a breeding ground for vitriol and toxic masculinity. The year is still 2016, and we’re still totally screwed. Yet, as we wade through stories about sexual assault — pertaining to both sides — and are forced to endure Mr. Trump’s uncomfortable at best, despicable at worst cerebrations on sexuality and gender, we fail to identify a defining factor in setting the scope for media coverage in this election: sexism.

Yes, we hate accusations of sexism. They seem so intangible and arbitrary, thrown around by the dreaded feminists, and serve to disrupt our everyday banter and fun. While this isn’t even inherently a bad thing, and can probably benefit society, our aversion to claims of sexism, particularly in this election as it rises to salience, obstruct us from seeing the full picture. When we identify Hillary as inherently unlikable and throw out arbitrary reasons for it — perhaps it’s her disingenuity (or maybe not), or her cold demeanor (eh), or her politicking (not always) — we circumvent the narrative, and prevent ourselves from solving a problem that reinforces the glass ceiling. Women in power are held to higher standards, and are perceived negatively for their “powerful” attributes. If you don’t believe this claim, the 2016 election is here to act as a beautiful simulation, demonstrating all these claims in action.

To start with the most recent of the offenses, we can examine the sexual assault claims that have haunted both sides. To start, in a refreshing divergence from the norm, with Hillary, we’ve seen her husband’s transgressions come back to undermine her campaign. To be clear, I don’t intend to focus on the actual veracity of the claims of the women who claim Bill Clinton assaulted them, because it’s not my job to judge their sexual assault. Rather, we need to apply a critical lens to how these claims are being employed today, specifically within the context of Secretary Clinton’s campaign. When Mr. Trump brought these women to the debate, giving them seats, he wasn’t trying to amplify their voices, or their individual narratives. He wasn’t trying to rectify the situation of wronged women. He was using these women, and their trauma, as political pawns, positioning them as objects to represent Bill Clinton’s wrongs. And that’s exactly where the sexism lies. The disgusting political appropriation of sexual assault aside, we’re seeing these women — with their own lives, problems, and stories — being put into a box, and manipulated for Trump’s gain. It’s a sexist and gross mistreatment of the issue.

Even if we ignore the technical dynamics of this political power move by Trump, we’re faced with another problem. What point, exactly, is he trying to prove? Is it that Hillary is a sexual predator? That hardly seems logical, given that her husband is the one accused. Yet, of course, former President Clinton serves once again to be one of Hillary’s biggest assets and simultaneously, liabilities. When the Trump camp brings ghosts of Bill Clinton’s past to the debates, and references them in interviews, they reaffirm their commitment to defining Secretary Clinton — a highly accomplished woman in her own regard, regardless of your thoughts on her policies — by her husband. And this criticism is sticking, because America is buying it.

Of course, there is the argument that when Secretary Clinton learned of this assault, she was snarky and rude, silencing the women instead of empowering them and banding together to conquer sexual assault in an act of defiance. I will say it with definitiveness: Every woman deserves to have her voice heard, and no one claiming sexual assault should be silenced without justice. However, we have to consider the ridiculous standard we’re holding Hillary to. Not only are we defining her by her husband, we’re paradoxically holding her to a higher standard than him, which is, well, gross. The woman was cheated on, and while I admit that her reaction could have been more refined, she has the right to be angry, and she has the right to react. The crass attempts to dehumanize her reveal our internalized disrespect for female authority figures.

Finally, within the context of sexual assault, consider that both Bill Clinton and Donald Trump have faced sexual assault accusations. While it’s objectively unacceptable that two of the most politically potent figures today boast this on their record, just examine the way these accusations have operated on the campaign trail. Clinton’s accusations reflect poorly on his wife; Trump’s slide off him in the wake of the leaked Billy Bush video. The video has engendered a national outcry, and while the media hints at stories on the manifest sexual assault allegations, more attention is diverted toward the video.

The leaked video with Billy Bush is terrible, and deserves every bit of backlash it has encountered. Yet, at the end of the day, why is Trump’s rhetoric more inflammatory than his actions? Perhaps it reveals our lack of understanding of the nuances of sexual assault, and our one-dimensional ability to only identify it at its most obvious.

Ultimately, many people hate politics, or at the very least, Donald Trump and Hillary Clinton. This is fair. What is not fair is brushing off the apparent and problematic sexism that pervades our perception of the election. While it may seem to only play out in the media and on the debate stage, it sends an incredibly strong signaling message to the American population of what is acceptable. Donald Trump’s words in his leaked video were reprehensible, yet he, probably inadvertently, was correct in one regard: If you’re a star, you can do anything.

Secretary Clinton bearing the burden for her husband’s actions reveals the impossibly high standard we hold women to, and why sexual assault survivors are so often undermined and mistreated. The shift in narrative from the alleged survivors of Bill Clinton’s assault to his wife’s unseemly actions de-emphasized sexual assault as an issue, and signals that ultimately, we don’t care about the survivors.