Basically, how to get people to stop talking and start working. 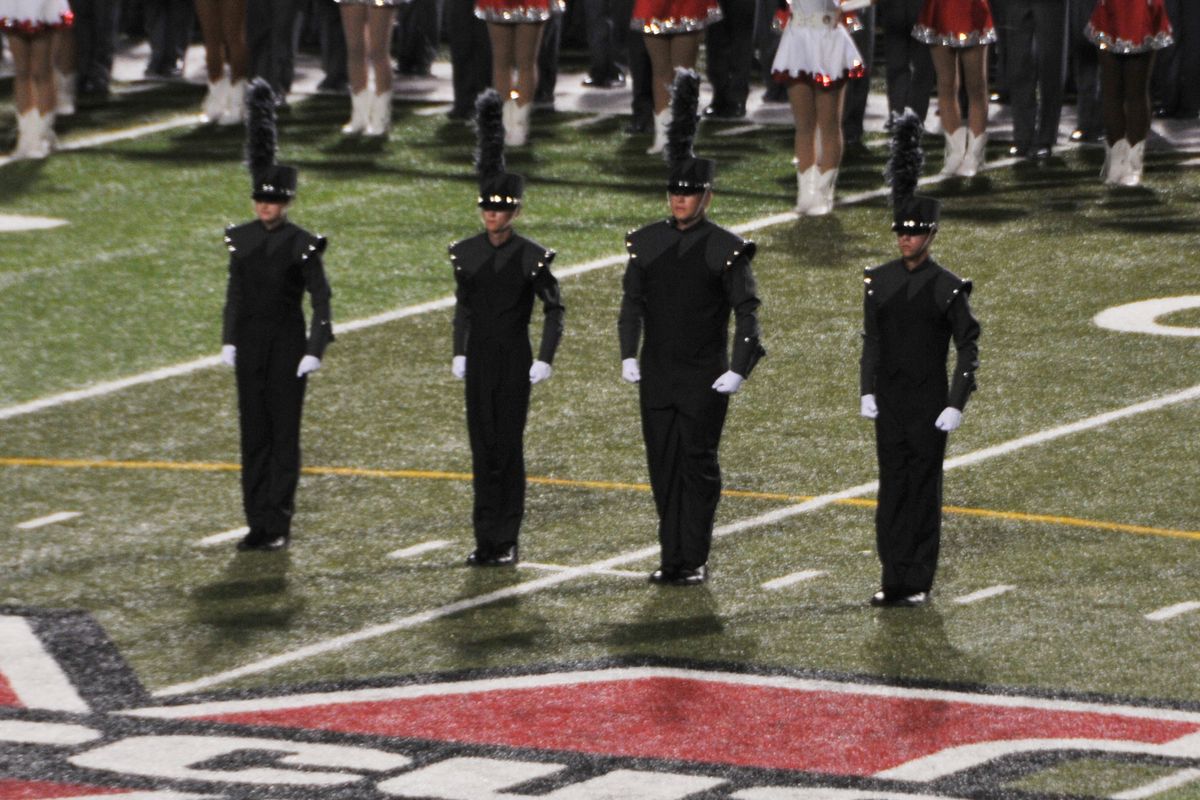 Drum majors: they conduct marching bands during performances, but their most important job is to be student leaders and role models for the rest of the band. How can drum majors lead the band when they themselves are students? In this three-part series, I’ll be explaining three crucial attributes of any successful high school drum major, based on my experience as a marching band member and drum major. In this part, I’ll explain how the best drum majors communicate with other members of the band.

There are many situations in which drum majors need to communicate. They are often responsible for leading warmups or rehearsals, as well as helping students on a one-on-one basis. Often a drum major will help a new student get up to speed on marching technique or drill learning. Drum majors also need to give out verbal commands across a 100-yard football field and need to be able to address the entire band confidently. Let’s dive into these three different types of communication and see how drum majors can better convey their message to the band.

This type of communication was the most difficult for me; I’m not that socially adept of a person, and I struggle to read other people well. However, I knew that there were different kinds of members I would need to talk to in a one-on-one situation. For upperclassmen and more confident, outspoken members of the band, I would be fine with my more stern, serious style of talking that comes naturally to me; this also came in handy for the more goofy members of the band who would regularly need someone to remind them to stop talking or stay focused.

However, I was extremely conscious of dealing with younger, quieter, or less confident members, as I knew that talking to these people in a stern way wouldn’t be effective. Instead, I made a more conscious effort to compliment them, and I repeatedly assured them that their mistakes were fine and natural. I still focused on helping them improve, but I made sure not to crush their spirits by being too harsh.

During rehearsals, drum majors will often need to speak to large groups; they may be leading a warmup or urging the band to stay focused. For group announcements, such as at the end of rehearsals, it’s important to plan with the rest of the drum majors to know exactly what each person will be saying; if you don’t seem prepared, the band won’t respect or listen to you.

Make sure to check with your fellow drum majors before saying something drastic; there were many times when I didn’t think rehearsal etiquette that day was acceptable, but the others didn’t notice the same issue. If I had come down on the band for talking when their etiquette was fine, the band would have gotten frustrated and would listen to me much less, which would have a detrimental effect on the band.

Speak as confidently as possible. Band members will always disagree with something you say, but if you stay too flexible and open, the band will have no direction or progress. It’s important to balance listening to your members and overriding their many concerns to get work done.

Try not to take out your frustrations out on the band. Make sure to keep your emotions in check and give constructive criticism instead of snarky comments or angry shouting. I fell into this frequently, and it was completely ineffective and hurt the band’s morale and work ethic.

Your instructions should be as clear and succinct as possible. Find the simplest ways to describe an action or instruction, and use similes and images that make sense to give members something to emulate. Your goal is to be as precise as possible in your explanations so that there is no confusion or ambiguity.

Finally, analyze yourself, and figure out your strengths and weaknesses. Some leaders are adept at getting along with people and encouraging them to work and improve. These people easily form bonds with others and exude positivity that can convince members to stop talking or practice their music. Others, like me, are better at crowd control and being more stern with band members. Both are necessary, and it’s important to figure out your strengths, work to improve your weaknesses and ask other leaders for help if necessary.

A well-organized, structured drum major team that works well together can tackle any situation and be a huge help to the marching band’s success.