Hillary's entire career has been about serving others. 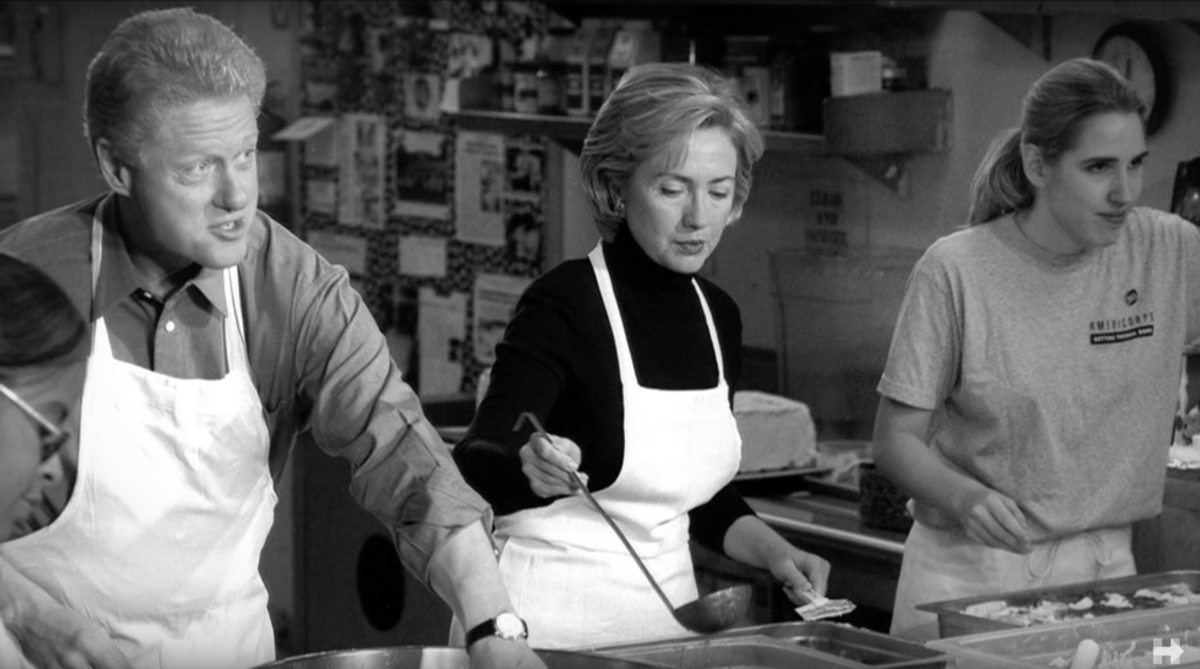 The Religious Right in recent decades has allied itself with the Republican Party. As a young Democrat in the south that grew up in a Southern Baptist church, I was taught growing up that being a Democrat would "send you to hell." The pastor at this backwards church would push politics more than he would Jesus. Was it because he truly believed that being a Democrat was a "sin" or was this pastor simply brainwashed by the Republican Party and the Religious Right leaders into believing that Jesus aligns more with the Republican platform?

Certain Christian fundamentalists, Republican politicians and corporate leaders have vigorously worked hard to impose their version of Jesus on the rest of us; they exploit his name, making it a marketing tool for their power and their profit, and it seems to me that the Republican nominee, Donald Trump, is beginning to do just that.

The Republican version of God is an angry and self-important character. There is only one problem with this, though -- an angry God cannot teach me how to be happy. I do not want to live in his kingdom, where revenge is more important than forgiveness, where judgement is stronger than compassion, and where to hate Trump's love. It is a kingdom of fear, self-righteousness, and pure hatred. It doesn't sound anything like heaven to me... In fact, it sounds like hell. Theologian and author Clint Willis states, "Jesus as I imagine and know him would not support policies that profit the strong at the expense of the weak."


This past week we witnessed Republican nominee, Donald J. Trump attempting to appeal to the Religious Right base of the Republican party by once again bringing up faith. Only this time, he didn't discuss TWO Corinthians, but instead he decided to bring up rival Hillary Clinton's faith. Now, there are only two reasons for doing such. One, he needs to appeal to the religious base and thus, like every other Republican in the last 30 years, he is exploiting the name of Jesus and using a twisted perverted version of faith to do so. And two, he knows that Hillary is more religious and represents the teachings of Jesus more than he ever will, therefore, he must lie and attempt at making her look bad to the Religious Right in order to win them over. Mr. Trump, I am here to tell you that you are flat-out wrong about Hillary's faith. Mr. Trump has said he "just doesn't know" about Hillary's faith... Well, let me tell you about it, then.

Hillary explains in her autobiography, "Living History," that her active involvement in the First United Methodist Church of Park Ridge opened her eyes and heart to the needs of others and helped instill a sense of social responsibility rooted in her faith, something Donald Trump would never know anything about.

The teachings of John Wesley taught Hillary that God's love is expressed through good works and good deeds, which he explained with a simple rule that Hillary has followed throughout her entire political career: "Do all the good you can, by all the means you can, in all the ways you can, in all the places you can, at all the times you can, to all the people you can, as long as ever you can." Hillary states in her book that as a young girl, she took Wesley's admonition to heart.

Prayer became a source of solace and guidance for her even as a child, for her father prayed with her every night. Not many people know it, but as a young girl, Hillary spent a lot of time in her home church, where she was confirmed. She attended Bible school, Sunday school and youth group and was active in service work and in the altar guild, which cleaned and prepared the altar on Saturdays for Sunday's services.

Hillary explains that the teachings of Bonhoeffer taught her the role of a Christian was a moral one of total engagement in the world with the promotion of human development. The teachings of Niebuhr struck a persuasive balance between a clear-eyed realism about human nature and an unrelenting passion for justice and social reform.

Hillary's Reverend, Rev. Jones, stressed that a Christian life was a life of "faith in action," and that is exactly what Hillary has executed throughout her entire political career. After law school, she could have joined a fancy law firm, but instead, she went to work for the Children's Defense Fund and helped disabled kids. She worked to reform juvenile justice in South Carolina, and she went undercover in Alabama and exposed racism in schools. She provided legal aid to low-income families in Arkansas. As First Lady of Arkansas, she brought reform to some of the poorest schools in the nation, and as First Lady of the United States, she worked with Republicans and Democrats to get healthcare passed that today is covering over eight million kids. As Secretary of State, she worked diligently to end the trafficking of young women around the globe and tackled LGBT discrimination around the globe. And as our President, Hillary will continue to live a life of service through her presidency by continuing to break down the barriers holding American families back. Hillary wants every child to have the opportunity of growing up and reaching his or her God given potential, but Hillary realizes we cannot reach our potential as a country unless we all do.

Opposite from the hate and division coming from Donald Trump, with a compassionate and faithful President like Hillary, together we will be a stronger country.