Things To Know Before Dating A Writer
Odyssey

Things To Know Before Dating A Writer

Writers are the some of the most interesting people in the planet, but know what you are getting into. 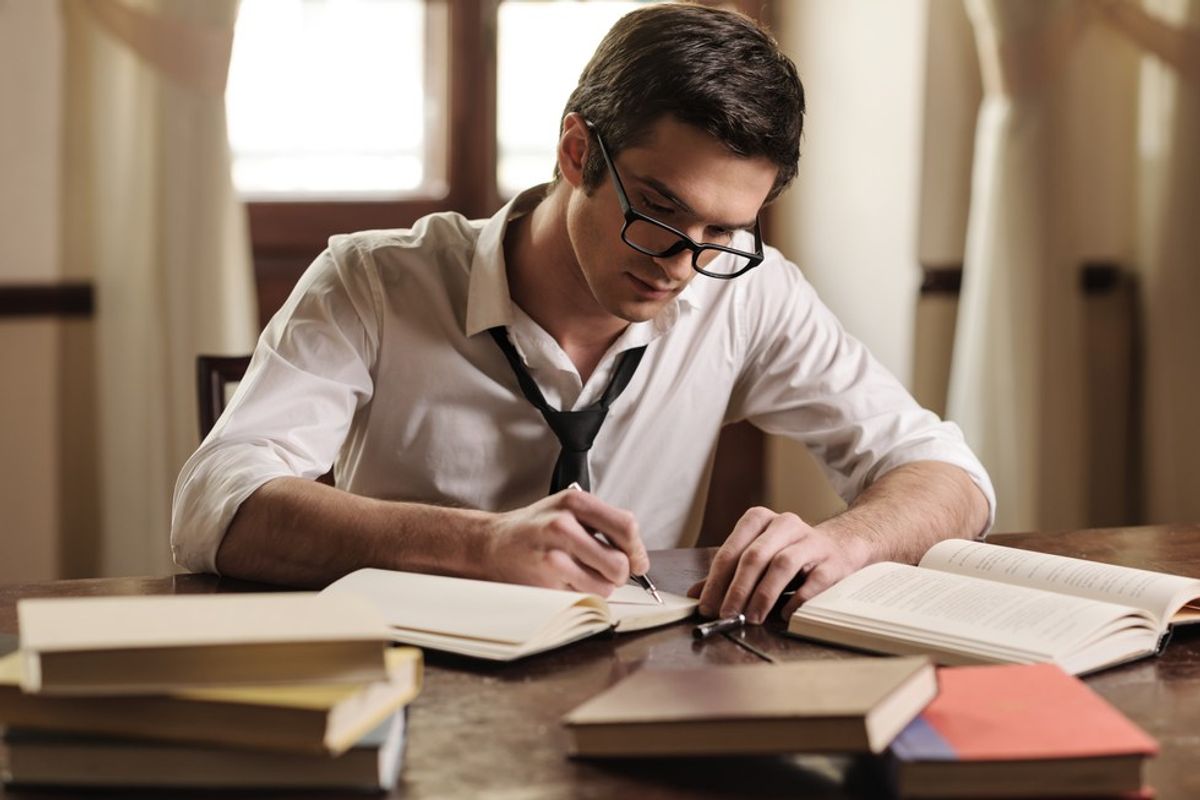 Listen up, ladies, this might help you in your quest to find the best guys in the world—writers.

We writers might act super cool in front of you, talk smooth and just generally have a way with words, but here's the secret: The whole writer thing is the only game we have.

To an unsuspecting potential mate, I’m just like every other unremarkable 24-year-old with glasses. But when they ask me what I do with my time and I reply with, “I’m a writer who covers sports and writes the occasional short story,” they melt.

I understand wanting to date one of us. I can’t blame you. We’re alluring. We’re elusive. We’re romantic. We’re witty. But you really need to know what you’re getting into because sometimes you get a lot more than what you expect.

We have no money.

We writers pour our hearts into soul-sucking work for next to nothing. That means we’re always going Dutch. If going to Capital Grille for nearly every anniversary is what you're looking for, then don't even try and stay with writers. They will get you a nice table at McDonald's or Taco Bell, but rarely we have the cash to drop on a $200 meal.

We can’t help it.

We are storytellers. Personally, I’ve been one for as long as I can remember. As a child, I wrote little short stories about aliens that would come and take over the world, or I would mash my favorite superhero (Batman) and create stories about how he would save the world in difference scenarios.

We are always connected.

Not only are we storytellers but we also have a compulsion for communication, which means we have the writer trifecta, which consists of Twitter, Facebook and Instagram. We are always on our phone but we are good at multitasking and are also listening to you—even though it doesn't sound like it, we are, I promise. Also, if we start "talking" and you text me, I reply instantly. No, it's not because I'm desperate, it's because it's in a writers DNA to always be connected. Don't throw us away because of a few quick replies. Please note: If you are not a great texter, let him know ahead of time or else he will feel you are uninterested.

Writers are dramatic, often gossipy and tend to exaggerate.

No matter what type of writer someone is, we all love hearing other people’s stories and we all love telling them. We tend to also exaggerate... a lot. I didn't jump a thee-foot fence, I jumped a 50-foot high wall with sharks swimming in the moat around it. We’re also prone to dramatic episodes and operate in hyperbole. We’ll never admit how dramatic we are, but truth be told, we love drama. If you date one of us, expect nothing less than improbable plot twists and extreme character development when recounting our trips to Wal-Mart.

We always have "a guy" for anything.

Sometimes I have a flash of inspiration and I have to handle it then and there.

I’ll apologize now for flaking on you or for taking a break from whatever we’re doing to jot some stuff down. (See the above note about not being able to help it.) If I’m in the mood to write, I have to take advantage of it, especially when I force myself to write for pay all the time. You just never know when it’ll strike.

You’ll probably see yourself reflected in the work.

If you’re dating a writer and they don’t write about you—whether it’s good or bad—then they don’t love you. They just don’t, pack up your things and leave because it's not going to get better. Writers fall in love with the people we find inspiring. If you don’t set my pen on fire, how are you going to set my heart on fire?

You can find out more than you’ve ever wanted to know about us on the Internet.

I don’t mean crazy in the way people throw the word at anyone we disagree with, I actually mean insane. Like I said earlier, we have a flair for the dramatics and so we are often misunderstood. But I'll be honest, we have to be at least a little bit on the crazy side, or we wouldn’t be any good at what we do. Really, who wants to read something a boring sane person wrote, anyway? Not me.

We’re actually not cool at all.

I know, it may seem cool to earn money from writing, but it’s not. It’s just what we do. I do not lead a glamorous life, and no, meeting famous people isn't "awesome." I mean, it used to, be but now it just became part of the job and because you see them often, they become regular people. Writing is mentally taxing labor—albeit conducted while in sweatpants on my couch—but labor just the same. And we almost never see the sun. Seriously. Take us on a midday stroll or something. We probably need a break from staring at those two paragraphs we were working on all morning.

All writers need a good editor, but that editor is probably not you.

We may ask for your opinion on our work, but unless you’ve won a Pulitzer or something, we’re gonna get pissed if you’re critical of our lifeblood. This works in reverse, too. I’ve had girlfriends ask me to review their work, only to balk when I rip it to shreds. What did you expect? People pay me to edit their work. If you don’t actually want my professional opinion, don’t ask for it.

We might come off as pompous jerks, but we are not.

If I had a dollar every time a friend told me that when they first met they thought I was a pompous jerk, I'd be the richer than Donald Trump. Sure, we love to talk about ourselves, but that doesn't mean it's not for nothing. As stated above, we are storytellers and so we love to talk about our day, or things that happened to us. But deep down, we aren't being pompous jerks, we are just being friendly and hoping you love us for talking about how our day went.

We keep irregular schedules at best.

One day I'll have three 1,000-word pieces due and a feature to fact check that I’ll work on until 4 a.m., and the next day I’ll be home watching "Justice League" all day. Just because I don’t have a job I go to, doesn’t mean I’m not busy.