Confessions Of A Narcissist

A journey from normalized self-hatred to loving every roll on my tummy. 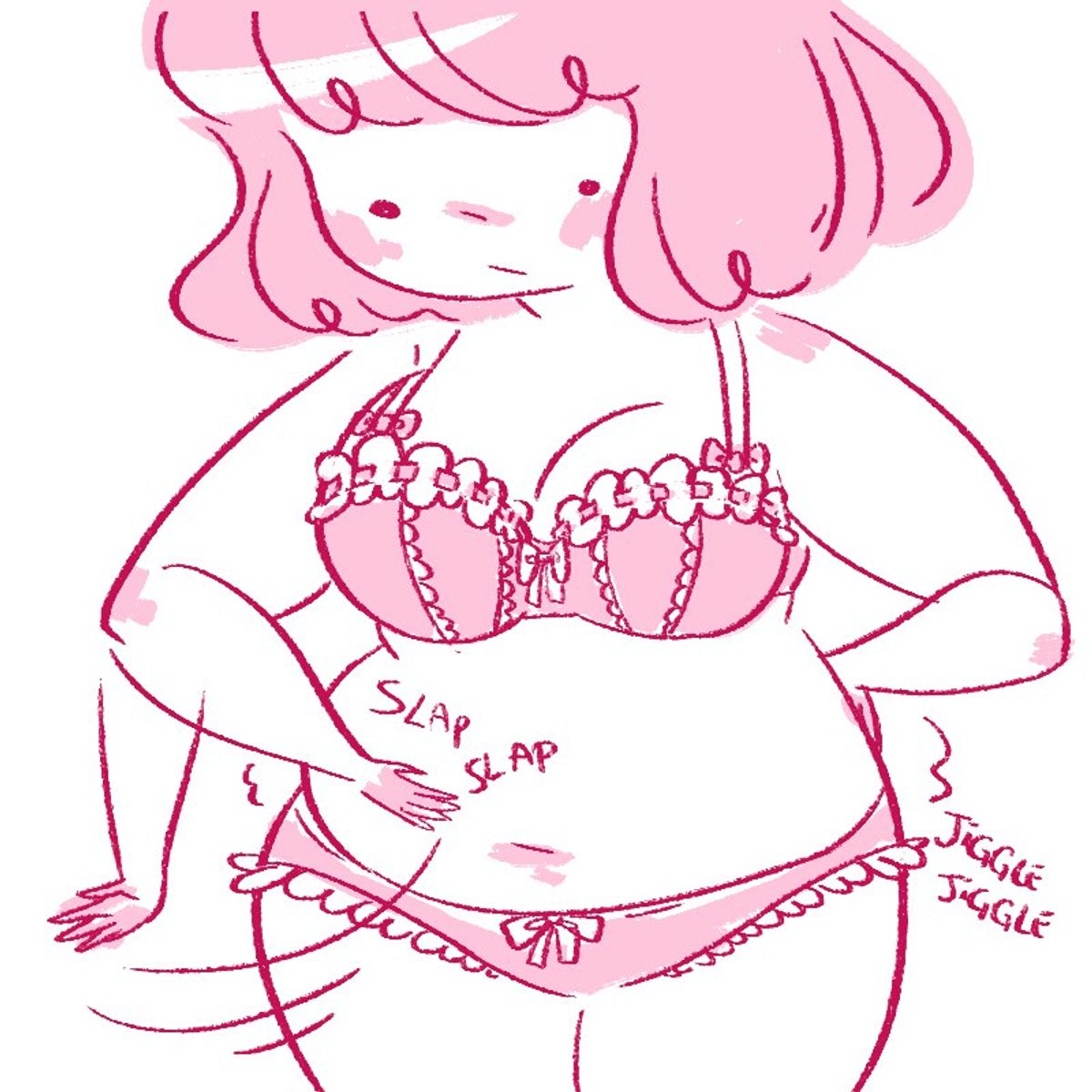 It wasn't until this decade, it seems, eating disorders and self-destructive behavior as a result of body image issues became recognized as an epidemic. Statistics show that around 20 million women and 10 million men suffer from a clinically significant eating disorder at some point in their life, and nationally, around 80 percent of individuals understand eating disorders as serious illnesses. I feel a little lucky to live in this age of body positivity, because not long ago, being curvy in the slightest was to be shamed, shunned and shut down.

As a child, I knew the world wasn't as forgiving to fat girls. I grew up when flattering clothing meant clothing that made you look thinner. Where fat was an insult more often than a noun: not just a physical description, but a reflection of a personality. Where “You look healthy” is what you say when a girl gains weight, and “You look good” when a girl loses weight. I was raised in a society that taught girls that it's our responsibility to be as small as possible. Do we not deserve to take up space?

One of my earlier memories is racing back to my room after a couple of my aunts made comments on my weight. I was probably 8 years old. "We're your family" didn't soften any insult. "We're only telling you because we love you" only meant they were not the only ones to think of me as fat. That was the first time I heard the phrase "Sticks and stones will break your bones, but words will never hurt you." I suppose that much is true. They'll never hurt me the way sticks and stones will, but words have a way of festering in a person's mind.

Those comments were seeds planted within me that would soon blossom into paranoia and self-destruction. In my first year of high school, I remember attending a talk on the danger of eating disorders. But after years of torturing myself mentally about the way I looked, holding tightly to certain words, I was too weak to resist this drastic attempt to look the way I thought I wanted to look. In the first couple months, I was losing a substantial amount of weight, as well as control over my eating habits and the willpower to stop.

In my second year, I became more involved in my school's extracurricular activities, hoping that maybe in keeping myself busy, I could forget about pain I felt inside. I joined water polo, golf, student government, student ambassadors, Comedy Sportz, my school's annual musical, etc. You name it, I probably did it. Even though I was having fun, there was always a parasite of a thought picking at the back of my head, making me more self-conscious than before.

As quickly as my negative tendencies were fueled, so was my curiosity on body positivity movements I saw on the internet. From random people I followed on Tumblr to celebrities I looked up to, people were opening up about their struggles with their own body images, speaking out against Hollywood beauty standards and sharing their experiences and how they recovered. The thing was, I didn't feel like I needed help. I felt like this was something I could stop when I got to where I wanted. I now realize how wrong my mentality was. Not only did it invalidate the pain of another person, but it also invalidated the pain I was putting myself through.

Toward the end of my third year, I opened up to a close friend about what I was going through, which eventually lead to me opening up to my family. Had I never told them, though, I don't know where I would be. These were days I was attending doctors appointments, therapy, healing masses and support groups. These were days I was forced to look deeper into my bulimia nervosa and really tackle the core of my problems: my body image.

After my recovery, the positivity I had kept mainly as a shield on the outside became something I started to really feel on the inside. It was as though a switch had flipped, and the body positivity movement I was once skeptical about had really set it.

I've been thinking lately about the second idea I mentioned earlier, about loving your body and changing it. With my experience with bulimia nervosa, I can recognize an extreme level of narcissism masked in self-hatred. I loved my body so much that I was willing change it to make other people love it. I wasn't obese, and neither did I have any real weight issues before I was bulimic. There was nothing severe or life threatening about my weight or image that required any kind of drastic change.

It's important that I address that there's nothing wrong with wanting to change your body, but the reasons and means in which one goes about doing so shouldn't stem from hatred. Change should always be out of love and seek positive, healthy results.

It's not to say I don't have my off days, but I'm a lot more forgiving when my mind travels to dark spaces. There are parts of my body I wish I could change at times, but I recognize these feelings as normal, as well as the waves in which my mind and body work. Finding clothes that make me feel comfortable and beautiful, surrounding myself with people who love and respect me for the person I am and trusting in myself have improved my mental health, along with the way I look at and love myself. Body positivity is not about completely and wholeheartedly loving one's body, but rather accepting it.