After winning the national championship, Coach Dabo never forgot who to thank the most. 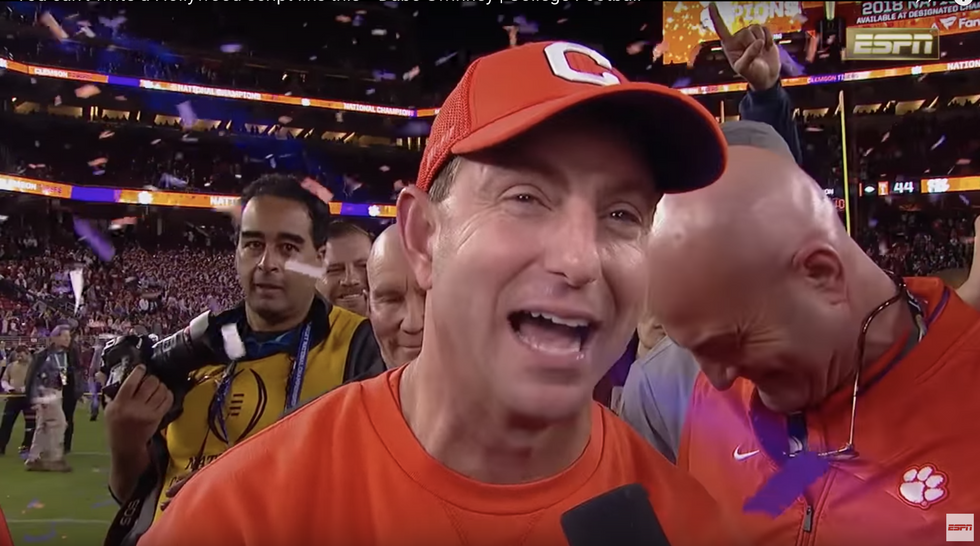 "All the glory goes to the good Lord."

After a fantastic win against Alabama in the 2019 National Championship, Clemson Coach Dabo Swinney gave all the glory to God during his post-game interview, and I couldn't thank him more. No matter who you pull for in college football, it's extremely hard to watch this interview without smiling.

In a world where there is so much negativity and hatred, this ray of light was much needed. An interview of a man who just accomplished a perfect season, beaming with pride and celebrating the blessing that that moment was in his life and in the lives of others just shows how truly wise he is.

Swinney left us with many inspirational words of wisdom, that can be applied to not only football but to life. Smiling the whole time, Dabo stated: "...joy comes from focusing on Jesus, others and yourself." He stated multiple times how much a blessing this moment was for both him and his team, and how extremely proud he was of their commitment. He praised his team for their teamwork and their passion, and that that was what got them a win and a perfect season. "Only God can do this and that's a fact," Swinney stated.

Coach Swinney said that the team had the "eye of the tiger tonight," but their coach definitely had his eyes looking up to the Lord. He placed all of the glory, not on himself, but on his team and on God, stating "All the credit, all the glory, goes to the good Lord," showing how modest of a coach Dabo is.

After the interview, Coach Swinney received many praises, including Magic Johnson who tweeted, "I love Coach Swinney's interview on ESPN giving glory to God and crediting his players. That was beautiful."

A note should be taken out of Coach Swinney's book, showing that your accomplishments are a blessing, and your failures are just a bump in the road on your path. His modesty, pride, and faith are truly awe-inspiring, and I'm beyond respectful of him as a coach and now a man. Thank you, Dabo, for taking such a great moment, and making a great statement to the world, because you never know who needed to hear it. You are definitely so much more than a great coach, you're an inspiration.

'You can't write a Hollywood script like this' - Dabo Swinney | College Football www.youtube.com