Don't Forget To Pack Your Handgun! 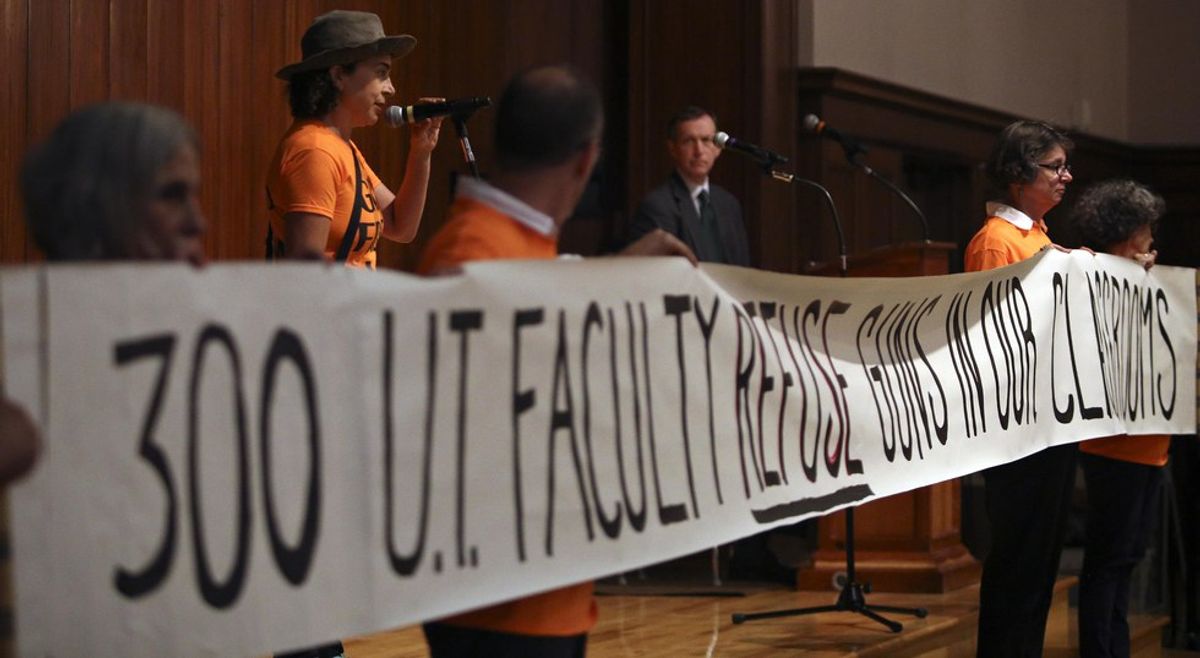 August, the time of year where students everywhere are abruptly awakened from the most valued holiday of the school year, summer. We’re quickly filled with check lists that ensure we’re ready for fall classes to begin and the realization that we forgot to buy our textbooks among many other school necessities sets in.

The first day of class is here, ready or not. Most students will agree that the first morning when they sleep through their alarm clock, hurriedly brush their teeth, put their shoes on, grab their backpack and their handgun that they were not ready.

But is grabbing your handgun before you hastily try to make your eight A.M. part of your morning routine? If it’s not be prepared that the person who sits next to you this fall semester might include it in theirs.

Senate Bill 11 has taken effect as of August first. But what does that mean for college students who attend public universities in Texas such as The University of Texas at Austin?

This Fall Semester if your are 21 and licensed to carry a handgun, you may now carry it on you or holstered in a backpack or handbag that is close enough that you can take hold of it without changing position. There are several areas of campus where handguns are prohibited and it is the responsibility of the licensed holder to be aware of where those areas are located. Open carry is not allowed on campus under any circumstance and it is advised if you see this to not approach or question the carrier, and to immediately call 911 (1).

While many people in Texas hold close to their heart the importance of the Second Amendment of the United States Constitution, this new piece of legislation brings up mixed responses to whether or not guns have a place in the classroom. As a student attending The University of Texas at Austin I’ll explain the perspective that a student could feel while having to be in the middle of the trial of this new Bill.

Stress, we all get it whether or not its during syllabus week at the beginning of a new semester or when the pressure of having four finals in one week is upon us. Stress become a major factor that leads to mental illness with one in four adults suffering from it in a given year according to National Alliance on Mental Illness. Because of this, it’s not uncommon for students to suffer from suicidal thoughts. Suicide is the second leading cause of death among ages 15-34 according to the Center for Disease Control (2). With an alarming rate of 1,100 college students who die each year from suicide (3).

With the possible appearance of guns on campus it could create an uneasiness among the student body which could hinder their freedom to their First Amendment Right by making others feel intimidated to participate in a heated discussion during class.

Also the professors at the University have chosen to speak out to a decision that effects their career. More than 150 factual have come together to take a stand against what they believe is necessary to they're teaching and academic environment (4). The students have also joined in creating the 2,085 Members, who are against this legislation, in the Gun-Free UT page on Facebook (5).

While some say guns could create a safer campus others could argue that it could create a greater risk for suicide, havoc on the mental health of others caused by anxiety from their fellow classmates, and the possibility of having students First Amendment Right stripped away from them really worth this experiment that the Texas Legislation created? Isn't the voice of the students and professors vital to what the legislators should keep in interest of? It’s no wonder why millennials have no interest in keeping up with politics, because we aren't being listened to or valued.