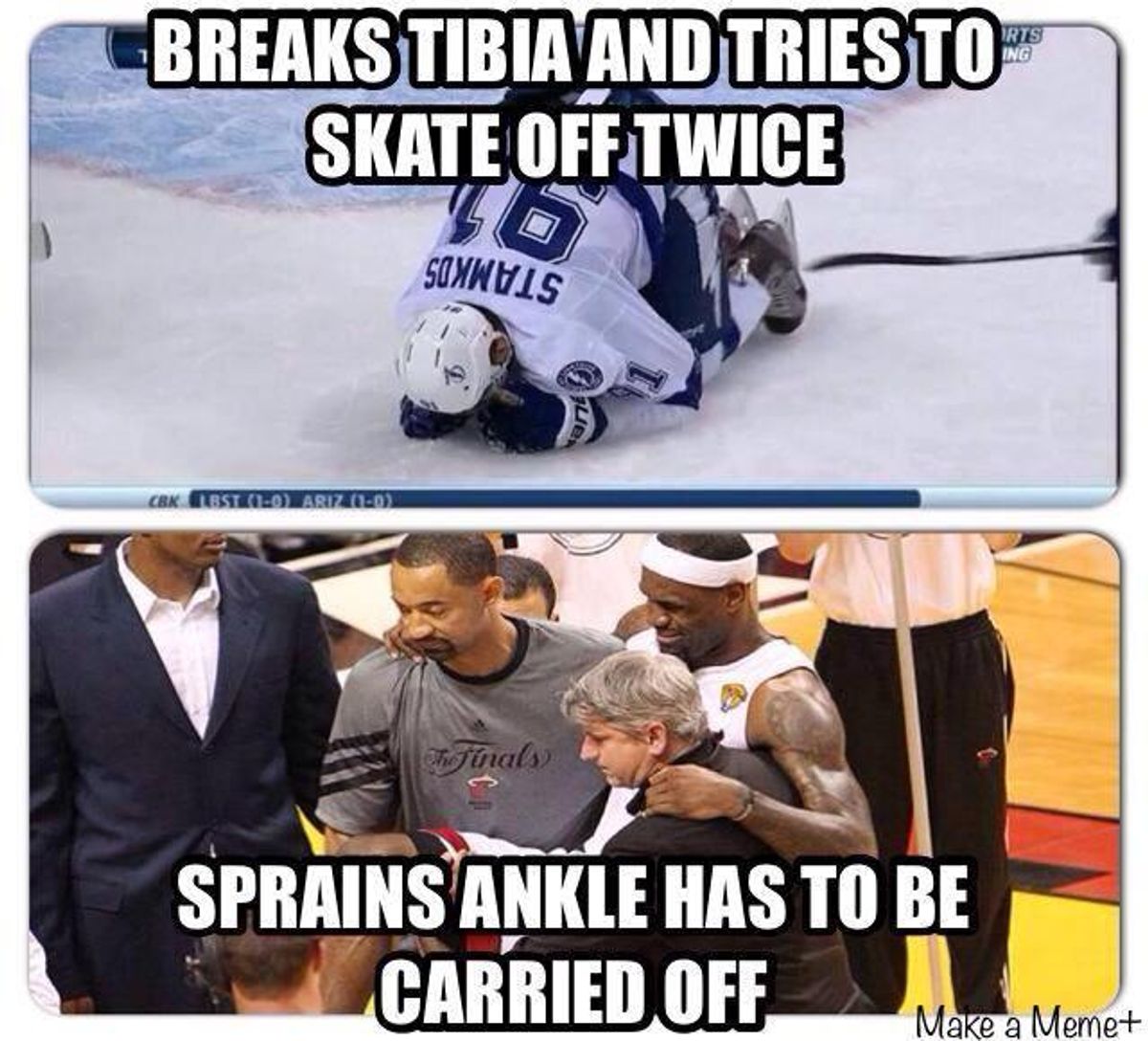 Hockey or basketball. Both of these make the cut as one of the Big Four sports in America. Both are fast-paced games, with five players that have roles on offense and defense and up and down the court or rink. Both include many players from other countries. And even the most primitive fan recognizes that the purpose of the game is to place the object (ball/puck), in the net in order to win the game.

Yet, neither is in the running for America’s pastime. Neither is the most popular sport in the country. And both of these sports have teams in lesser-populated locations. The similarities go on and on, but what are the differences?

It is not outlandish to suggest that there are cultural differences between hockey players and basketball players. It is no secret that the NBA is made up of mostly black athletes and the NHL is predominantly Caucasian. But the differences are not based on race, rather the culture of the two sports is to blame.

The first example is the difference in penalties and fouls. In hockey, there is checking. In basketball...well, it is a foul on the defense if they get run into or someone jumps to shoot, and leans forward to bump them. Yeah...that is pretty bad.

In basketball, you pretty much have to be tall, extremely tall. The average NBA player is 6-foot-6! Hockey players often don't even reach six feet tall.

In basketball, you can have one superstar who, as long as he has some useful role players, produce a decent team. Trade for another superstar and you have a top team. Buy another big-time player in free agency and your franchise is now a favorite to win the title. Does that sound familiar?

Of course, the Miami Heat come to mind for hoarding the Big Three (LeBron James, Chris Bosh and Dwyane Wade) but their path to success wasn’t much different than the Celtics from a few years before. They had Paul Pierce and brought in Kevin Garnett and Ray Allen (and drafted Rajon Rondo). Now, they didn’t bring in the best player in the league, but both essentially transformed from mediocre to a top level almost overnight.

In comparison, hockey teams take years to build. Now, it does help now and again to draft a John Tavares (Islanders) or Steven Stamkos (Lightning). However, the Chicago Blackhawks and Los Angeles Kings have had enormous success without any of the aforementioned superstars. With that said, the Hawks were a bottom-feeder for several years and ended up with top draft picks, which turned out to be Jonathan Toews and Patrick Kane, two top 10 players in each of the past several seasons. But it's not just about them, they picked strong defensemen in prior drafts (Brent Seabrook and Duncan Keith), signed veteran Marian Hossa, and had contributions from players that went on to sign massive free agent deals after success as Blackhawks (Dustin Byfuglien, Andrew Ladd, Brandon Saad, to name a few). The Kings have Anze Kopitar and Drew Doughty, but the secret to their success has been contributions from lower defensive pairings and third-line players along with elevating their game during the playoffs. In comparison, the Capitals have Alex Ovechkin and have paired him with talented teammates, but no matter how many goals he has scored (many of which are pretty awesome, see below), he has yet to hoist the Stanley Cup…

There are other cases in basketball, the San Antonio Spurs can certainly be compared to the Blackhawks. It is not solely about how teams become successful. It is the players themselves and how they act before, during and after the game. Kevin Durant thanking his mom after winning the MVP award shouldn’t be such a rare occassion.

On one hand, we have the best player in the sport saying that he wants to be remembered as a hero and to be looked up to. The other player, Team USA fan favorite T.J. Oshie, says that he is not a hero. Rather, soldiers overseas are the real heroes.

And this is following unequal performances. Lebron likely came off a game in which he shot the ball several times, drew fouls by running into people to produce opportunities for free shots. He may have made the game-winning shot. He may have made several big shots in the fourth quarter. But did he go one-on-one, with little chance of success, playing for his country...five times in a row? Lebron is incredible, but he shoots just 10 percent on shots in the last five seconds to tie or win in the last decade. Oshie scored three goals when it counted to beat the Russians on the international stage.

And he still isn't conceited enough to call himself a hero...but why is this? Basketball is a selfish game. You can still have a good team, even if your offense is one guy shooting the ball 50 times a game and charges to the basket to draw fouls *cough* (James Harden) *cough*. Now, the Golden State Warriors are changing the NBA thanks to their historic season. But this is a team that has incredibly strong camaraderie and it is a team that took years to cultivate. This year "dubs" could be successful even without the reigning MVP, Stephen Curry. Why? Because they play more like a hockey team than a basketball team. When they bring the ball up, they make several passes before taking a shot. Now shooting percentages are very different in both sports but the Warriors spread the ball just as hockey teams share the puck.

Remember "the decision" about six years ago? You know, the TV special set up so that Lebron's decision of what team he was signing with could be broadcasted nationwide. "I'm gonna take my talents to South Beach."

Even the way he said it, "take my talents." It was a dream come true for ESPN but I do not know if sports have seen that level of arrogance. Could you imagine Sydney Crosby making such a show of himself? Of course not.

Generalizing here, but basketball players are all about the flashy and are so egotistical that it affects the game. On the other hand, hockey players are gritty, tenacious and make the sport one of the most universally respected sports. Basketball is selfish and hockey is not. There is nothing racial about that.

The Difference Between Swimming And Diving