Australia Overcomes Team USA In Wild Wheelchair Rugby Final
Odyssey
CurrentlySwoonLifestyleHealth & WellnessStudent LifeContent InspirationEntertainmentPolitics and ActivismSportsAdulting
About usAdvertiseTermsPrivacyDMCAContact us
® 2023 ODYSSEY
Welcome back
Sign in to comment to your favorite stories, participate in your community and interact with your friends
or
LOG IN WITH FACEBOOK
No account? Create one
Start writing a post
Sports

It took two overtime periods and a hard-hitting match on both sides to decide a winner. 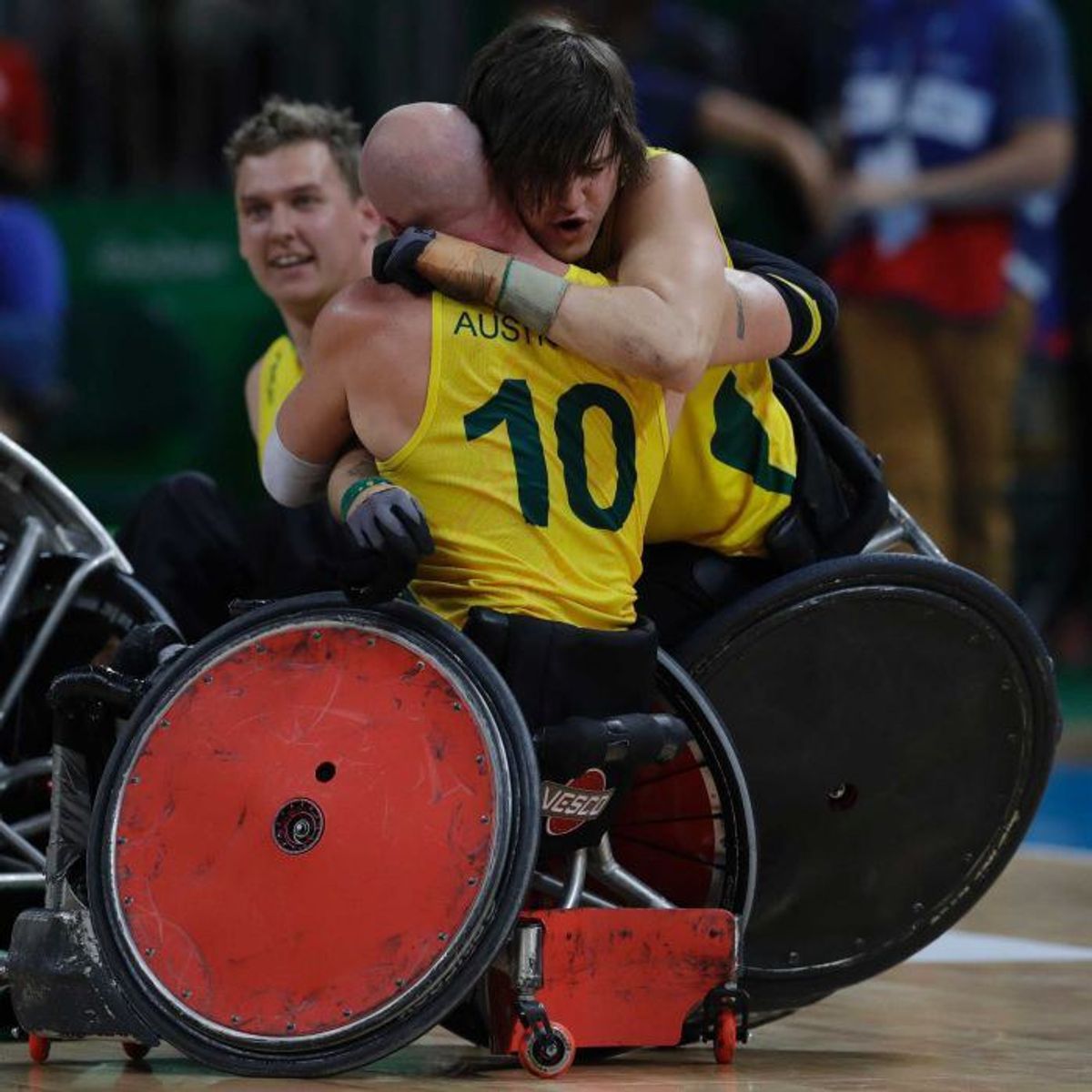 One of the final events of the Rio 2016 Paralympic Games, Wheelchair Rugby, culminated in the gold medal match between USA and Australia. Eight countries, Brazil, France, United States, Canada, Australia, Japan, Great Britain, and Sweden, battled for gold from September 14th to September 18th. Both Australia and the US went 3-0 in through group play (Australia in Group A, USA in Group B). Team USA defeated Canada in the semifinals 60 to 55. USA was led by Head Coach, James Gumbert, and Captain, Chuck Aoki, who scored 34 points. Australia surpassed Japan, 63 to 57, to advance to the finals. They were led by Head Coach, Brad Dubberley, and high scoring performances by Ryley Batt (34 goals) and Chris Bond (20 goals).

Australia and USA met in the finals on Sunday, September 18th. Australia looked to repeat their Paralympic gold in 2012 while the United States looks to improve upon their Bronze finish in London.

[facebook https://www.facebook.com/plugins/post.php?href=https%3A%2F%2Fwww.facebook.com%2FUSAWheelchairRugby%2Fposts%2F1334288536589226%3A0&width=500 expand=1]
In the gold medal match, Team USA started out strong, winning the jump ball and scoring first with a solid goal by #5 Chuck Aoki. Australia then responded with a goal by Andrew Harrison. Quick goals followed from Aoki and #3 Ryley Batt to keep the game tied. Back and forth scoring continued throughout the first quarter, ending with a score of 12-12. USA held the lead or a tie for much of the first period with Aoki scoring five times. Josh Wheeler scored once in the opening quarter, tying the game at 12. Australia kept pace with six goals from Batt who gave them their first lead seven minutes into the game. Earlier in the first period, Kory Puderbaugh added a goal for USA with so much momentum that he tipped his chair over after scoring!

The second quarter started out with another Ryley Batt goal for Australia. Teammate, Chris Bond was soon penalized for striking Josh Brewer from behind to prevent a goal. Brewer took advantage of the 4 on 3 with a goal for Team USA. USA followed from behind throughout the second period with Australia rarely giving up the lead. The first major misstep by either team happened two minutes into the second quarter when Josh Brewer mishandled the ball and was smashed by Batt for a turnover. USA was able to bring the game within one point at the end of the first half thanks to three late goals by Eric Newby. A strong quarter from Batt and Bond of Australia, dubbed the "killer B's" by the announcer, who combined for 14 goals in the second period to keep them ahead 26 to 25.

Just like the first period, Team USA started off the scoring in the third with Australia keeping pace. After a minute and a half of back and forth play, Chad Cohn intercepted a Ryley Batt pass leading to a Kory Puderbaugh goal. Team USA kept the upper hand throughout the third period but almost took complete control with just under two minutes remaining. Batt looked like he was coming in to score but was stripped by Aoki. Aoki couldn't control the ball which went straight to Chris Bond who took it in for the tying goal. The third period ended at 37-37 with Aoki adding five and Josh Wheeler coming on strong with three goals for the US squad. Batt and Bond added five and three respectively.

Into the last period of regular time, the teams looked even as Australia led the back and forth scoring to start. Chuck Aoki countered later on for Team USA as he cut several times into the corner of the goal for a score. At 42-41 the US had a chance to tie but a pass from Chuck Melton to #12 Cohn was too high and went out of bounds. Batt countered with a score and Australia nearly didn't let go of the lead. In the seventh minute of the fourth period the US team regained control. With Josh Brewer back in the game, he scored back to back points with two clutch passes by Aoki. That same pair tied it up again at 49-49 with just 2.8 seconds left in regular time. The score remained tied after the 2.8 seconds so the gold medal match moved on to overtime.

The pair of Brewer and Aoki powered Team USA in the three-minute period of overtime. A quick pass from Brewer to Aoki gave them the lead at 50-49. Brewer and Aoki matched "the killer B's" of Australia resulting in a 54-53 USA lead with 15 seconds left. Ryley Batt tried to finesse it in for the tie but was blocked by #11 Seth McBride. Batt dished the ball off to Bond who powered through Aoki and Jason Regier for the score. This ran the clock off leading to a second overtime period tied at 54.

Josh Brewer won his third jump ball of the match to kick off the second overtime period but this one couldn't be contained by Team USA. Ryley Batt immediately took advantage, putting Australia up by 1 with his astounding 25th goal of the game. Quick back and forth play ensued again with another goal by Batt, two by Chris Bond, and one each for USA from Brewer, Aoki, Melton and Wheeler. Batt then put Australia up by 1 at 59-58. With 15 seconds remaining, Chuck Aoki attempted to control the clock to tie up the game, but he was squeezed into the back corner and forced to call a timeout. When play resumed Melton attempted a scoring pass to Wheeler, but Wheeler had already crossed the goal line before catching the ball. This resulted in a turnover to Australia. With three seconds remaining Australia held on to win 59-58 in double overtime.

The full video of the gold medal match can be found here with highlights below.

Note: Athletes playing Wheelchair Rugby in the Paralympics must have some form of disability afflicting both their upper and lower extremities. Many are partial quadriplegics or amputees. Each athlete is classified based on the level of their disability ensuring a level playing field. Unlike other Paralympic sports, all of the different levels are on the same playing field. Regardless of their classification or disability, every athlete is hit, thrown, and smashed making this one of the hardest hitting sports in the world let alone the Paralympics. This intense action was more than evident throughout the tournament. Read here for more detail on this amazing sport.

Nicole Marie Nigro
Individual Creator
6945
c1.staticflickr.com
Where to start...... Let me start with the cliche that life throws us curveballs and what we do with it is what counts.