Why Americans Become Obsessed With Pumpkins Every Fall
Odyssey

Why Americans Become Obsessed With Pumpkins Every Fall

There's a history behind those sweet squashes, and why Americans can't get enough of them come autumntide. 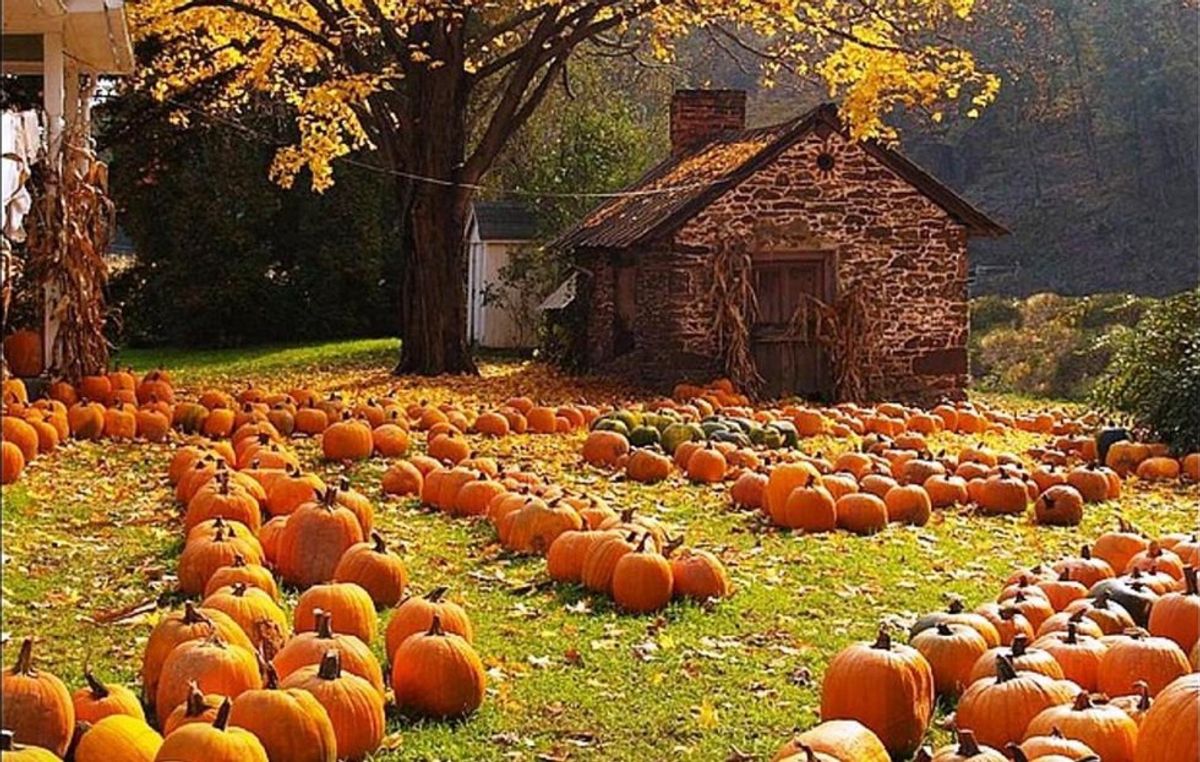 We're only halfway through September, and yet people are already raving about the start of autumn. While I'm content to wait for the weather to cool and the leaves to turn to start celebrating, I am certainly looking forward to fall this year. Every season has a spirit, a character of its own, and fall's is particularly enchanted... In temperate North America, at least. It's more than just a time for gawking at foliage and pigging out at harvest celebrations. Autumn is the start of the downswing. The pace of life decelerates. Families move closer together after the adventures of summer come to an end. The earth breathes its last as farmers take up the last harvest before winter. The smell of fresh produce mingles with that of gentle decay.

There's good reason for the haunted holiday of Halloween to take place in autumn: it's the season of memento mori. If there's any place on the calendar for a day about occult and death-related symbolism wrapped up in family-friendly consumerism, it might as well be in autumn. But speaking of symbols, as far as fall, in general, is concerned, it's not spooky scary skeletons that define the season for me, nor football, nor foliage. No, if there's one thing that stands as a perfect symbol for autumn, it is the pumpkin.

Yes, the humble orange squash. Boil 'em, carve 'em, stick 'em in a latte. Americans are obsessed with this great gourd. You can see it every year: promotional offers for pumpkin pies, pumpkin donuts, pumpkin teas, pumpkin ale, pumpkin coffee; not to mention carving competitions, chunking competitions, pick-your-own farms, and total ubiquity in seasonal decor. We love the stuff. We can't get enough. But why? What makes the pumpkin such a seasonal sensation? If you ask me, it all boils down to two things: nutrition and nostalgia.

Our friend the pumpkin has an interesting place in the culinary culture of today, but it wasn't always like this. Up until the 19th century, pumpkins were considered low-class nosh. Its cultivation is labor-intense and unpredictable. Its harvest is difficult to automate. Yet, it isn't as sweet as cane sugar, molasses, or maple syrup, which were all more readily available. Thus, pumpkin never gained status as a rare delicacy, and instead languished in "not worth the bother" limbo. It was often used as food for slaves or swine, or as a substitute for other sweeteners in the cuisine of poor farming families who grew their own gourds.


However, even in those days, the roots of pumpkin fever were creeping across the American consciousness. Industry and urbanization was on the rise, and as farming families moved into cities and closer to the means of print and discourse, their nostalgia for the simpler and slower-paced lives they left behind was allowed to diffuse into popular culture. Even today, buried in every American's national identity, there is a grain of longing for pasture. For frontier. For the old pumpkin patch. Thanksgiving would, by the way, be made a national holiday that same century, in 1863. Pumpkins started to take their place as a seasonal novelty in an age where agriculture was downsizing and streamlining to focus on cash crops, and thus was our humble friend rescued from obscurity. Imagine our world today if pumpkins had suffered the same fate as turnips or rutabaga!


What does that mean for Americans today? Well, we live in a day where opulence and restraint are both celebrated, to an extent. Eating a diverse and balanced diet is becoming #goals for this generation as they move out on their own and begin cooking for themselves and their new families. We still love eating out and ordering delivery, but our tastes are maturing. To the modern American, pumpkin is a healthy treat. An attainable indulgence. A humble delicacy. So sip those pumpkin spice lattes, nosh that pumpkin pie, and don't forget the whipped cream. While you do, remember the humble history of that beautiful orange gourd, and give thanks to the small-time growers who keep the fall favorite alive.


And if anyone tries to put you down for enjoying them, just show them your Pumpkin Dance.